Now, The Wall Street Journal is reporting that the shortened wait times for the high-end iPhone is due in part to supplier Foxconn and its high volume production, with the company adding more workers to its assembly lines in China as its overall production capacity grows. 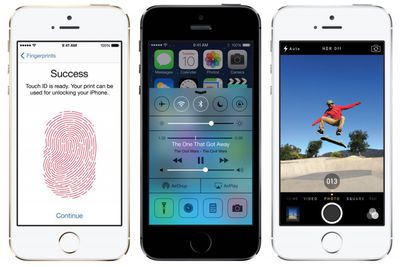 The Taiwan-based contract manufacturer, which has more than one million workers in China, has operated 100 production lines around the clock in Zhengzhou, north central China, at full capacity, according to executives at Hon Hai. The company has about 300,000 workers at its Zhengzhou site, dedicated to just making the iPhone 5S and key components such as metal casings.

To get a glimpse of just how complicated it is to manufacture the iPhone 5S, Hon Hai executives said the company has about 600 workers on each iPhone 5S production line to handle assembly work.

“We have been churning out about 500,000 iPhone 5Ss everyday, the highest daily output ever,” said the executive who declined to be named.

The executive cited in the report also stated that it takes a longer time to assemble an iPhone 5s compared to the iPhone 5c or previous generation iPhone 5, with only 500 workers per production line to assemble the two lower-end devices.

Notably, a report from Digitimes earlier this month stated that the Zhengzhou factory would be ceasing production of the iPhone 5c to shift the facility's manufacturing efforts toward the iPhone 5s. Foxconn was also previously estimated to be operating at only a minimum capacity of 8-9,000 iPhone 5c units per day.

Originally released in September, supplies of the iPhone 5s remained somewhat constrained following the launch, with the bulk of stock tending to go to Apple's own retail stores. However, while supplies continued to be scarce during September and October, they have appeared to generally improved throughout November, with several colors and capacities of the iPhone 5s available for immediate pick up in Apple Stores in the United States.

polterbyte
The 5c is as much as flop as the 4s was a flop AFTER the iPhone 5 was launched. And even at that, much less so, after all it sold over 3 million units on the first weekend alone.

How much demand was there for the 4s this time last year? Much less than the demand for the 5c right now, I'd wager.

What people must understand is that the 5c is not a new product: it's a watered down (plastic cover), glittered up (colors, ads) version of the iPhone 5.

It's selling exactly as well as it is expected to.
Score: 6 Votes (Like | Disagree)

Then, Why slowing down the production? It's clear that their prediction failed, they expected better sales for this model. 100$ less for the unlocked model and problem solved.


I'm 100% sure Apple has far exceeded all expected sales of the iPhone 5c. It just doesn't appeal to the MacRumors demographic but I can tell you the 5c is outselling all Android phones easily.
Score: 4 Votes (Like | Disagree)

Cause and effect seems a bit muddled there.
Score: 4 Votes (Like | Disagree)

The 5c is as much as flop as the 4s was a flop AFTER the iPhone 5 was launched. And even at that, much less so, after all it sold over 3 million units on the first weekend alone.

How much demand was there for the 4s this time last year? Much less than the demand for the 5c right now, I'd wager.

What people must understand is that the 5c is not a new product: it's a watered down (plastic cover), glittered up (colors, ads) version of the iPhone 5.

It's selling exactly as well as it is expected to.

500,000 iPhones per day? That's one crazy production rate :eek: What's even more amazing is the fact that it still hasn't caught up with demand 100% yet. I guess Apple is really doom this time :rolleyes:

Apple, the 5c is a bust. Never offer a poverty product to compete with a flag ship again.


If the offered the iphone 5, many of the 5S customers would buy the 5 instead of the 5S :D. Margins are better on the 5S, so they made the right decision. The product may be a flop, but it fulfiled its purpose.
Score: 3 Votes (Like | Disagree)
Read All Comments