iPhone 5s Orders Begin in the United States and Canada

Apple started taking orders for its flagship iPhone 5s in the U.S. and Canada at midnight Pacific Time after the phone launched earlier today in 8 other countries around the world. Most locales have seen tight supplies of all capacities and colors, with the gold model said to be particularly difficult to come by.

The iPhone 5s is available directly from Apple via the Apple Online Store and the Apple Store iOS App [Direct Link], with the iOS app historically more resilient against traffic surges than the online store.

Initial orders from the Apple Online Store will ship within 1-3 days. 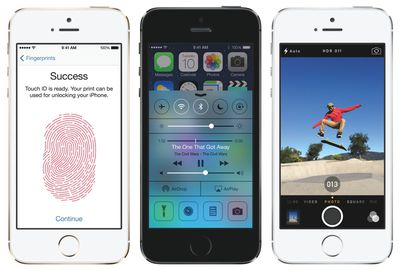 The iPhone 5s and the iPhone 5c, with the latter available for pre-order for the past week, will be available in U.S. Apple Retail, carrier and select third-party reseller stores beginning later today. Lines are already forming at retail outlets around the country.

In the U.S., iPhone 5s orders are available from:

and immediately canceled order after I realized there is still a tiny 4" screen :(

bmunge
Use the mobile app. Just got one, shipping 1-3 days
Score: 7 Votes (Like | Disagree)

KPOM
I guess Apple still treats us better in the US than the rest of the world. 2 hours into sales, and it's still 1-3 business days on most carriers (except T-Mobile/Unlocked) except for the gold version, which has slipped to "October." They clearly allocated a LOT more stock to the US than to other countries, where it instantly went to 7-10 business days.

Maybe they will sell 5-6 million this weekend, after all. I was worried about supply when I saw the Asian and European shipping times slip. But clearly it looks like it was an allocation issue. I guess giving a company 40% market share has some benefits. :)
Score: 5 Votes (Like | Disagree)

Greyed out!! Cannot order. so frustraing,

Woohoo! Easier than I expected...got in in the 1-3 ship time frame! Got one to surprised my brother. Can barely afford it but he served his country well.
Score: 3 Votes (Like | Disagree)
Read All Comments

Wednesday January 26, 2022 8:56 am PST by Joe Rossignol
Benchmark results have started to surface for MSI's new GE76 Raider, one of the first laptops to be powered by Intel's new 12th-generation Core i9 processor. Intel previously said that its new high-end Core i9 processor is faster than Apple's M1 Max chip in the 16-inch MacBook Pro and, as noted by Macworld, early Geekbench 5 results do appear to confirm this claim, but there are several...
Read Full Article • 280 comments