Vodafone Germany has plans to discontinue several models of existing iPhones with the release of the iPhone 5S and the iPhone 5C, reports German site Flo's Weblog [Google Translation]. According to an internal email, the 32 and 64GB iPhone 5 in both black and white will be discontinued, along with the black/white 16GB iPhone 4S.

This confirms an inventory leak from Canadian carrier Telus, which also suggested that Apple would discontinue the higher end iPhone 5 models. Both carrier leaks indicate that Apple's upcoming product lineup will consist of the flagship iPhone 5S, the low-cost iPhone "5C", and the 16GB iPhone 5. 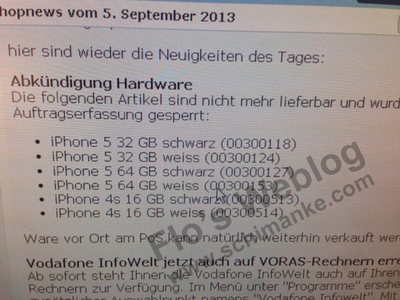 Apple's iPhone lineup has been in question over the past several months, and it has been unclear whether the iPhone 5C will serve as a replacement for the iPhone 5 or the iPhone 4S. The cost of the iPhone 5C remains unknown, and speculation has suggested that the phone, which is said to use many of the same parts as the existing iPhone 5, may not be truly low-cost, necessitating the inclusion of the lower-priced iPhone 4S in the product line.

An August note from KGI Securities analyst Ming-Chi Kuo indicated that Apple would discontinue the iPhone 5 in favor of the iPhone 5C while continuing to sell the iPhone 4S through the end of of the year, but the information from Vodafone Germany contradicts this theory.

Apple plans to unveil the iPhone 5S and 5C during a September 10 iPhone event. The phones are expected to ship to a number of countries shortly after, on September 20.

bushido
the awkward moment when you are german and did not know that "Abkündigung" is a real word
Score: 19 Votes (Like | Disagree)

Rocko1
May the Schwarz be with you...
Score: 9 Votes (Like | Disagree)

It's time to get rid of the ridiculous idea of keeping old technology around for longer than a year. Next stage needs to be to stop giving owners of handsets software updates when new handsets are released. I'm an iPhone 4S user and no way should we be getting iOS 7. Make us pay for a new phone if we want it.


This is one of the most insane comments I've ever read on Macrumors forums.
Score: 7 Votes (Like | Disagree)

freddiecable
why would apple ever keep the 4S? the lineup should obviously be 5S, 5C and 5.
Score: 5 Votes (Like | Disagree)

lewisd25
I've never seen so many mini Tim Cooks in one place before...
Score: 4 Votes (Like | Disagree)
Read All Comments