A new iPhone market forecast by KGI Securities predicts "substantial shipments growth" starting in August and supports the flood of rumors about a new, lower-cost "iPhone 5C", which is widely speculated to be released sometime in September. The report by Ming-Chi Kuo, who has a solid track record when it comes to Apple rumors, highlights five key trends for the upcoming few months:

- The components and the EMS (electronics manufacturing services) for the new iPhone will be ramping up in late-August/early September.
- Hon Hai (also known as Foxconn) will start manufacturing a version of the iPhone 5C supporting the TDD-LTE used by China Mobile in August, earlier than expected.
- Models supporting the TDD-LTE standard are predicted see a penetration of 25% in iPhone 5S and 35% in iPhone 5C shipments, which may boost Apple's presence in China.
- The iPhone 5 will be discontinued at the end of the third quarter, but shipments of the iPhone 4S will continue until the end of 2013. The iPhone 5C is therefore designed to replace the iPhone 5, rather than the iPhone 4S as originally predicted.
- The iPhone 5S will be the more popular model and will exceed the iPhone 5C in terms of shipments. 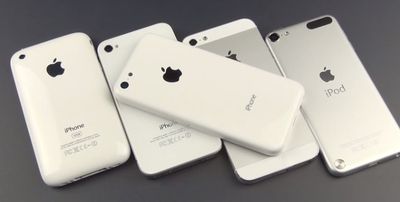 iPhone 5C rear shell compared to older iPhone models and iPod touch (Source: DetroitBORG)
A move by Apple to discontinue the iPhone 5 was rumored late last month, but it would be something of a surprise for Apple to continue offering the iPhone 4S while discontinuing the iPhone 5. Many had suggested that Apple's work to launch an iPhone 5C was an effort to unify Apple's lineup around the new Lightning connector and 4-inch display, but a move by Apple to keep the iPhone 4S on the market indicates that iPhone 5C is not a true "low-cost" device and is indeed primarily a repackaged iPhone 5.

Kuo suggests that during 2013, Apple will ship roughly 33.3 million iPhone 5S and around 27.2 million 5C units, with 5.2 million and 8.4 million units planned for the third quarter of 2013 respectively. The analyst also predicts that the iPhone 5S will retail at roughly $600–$700, whereas the iPhone 5C will sell for around $400–$500 SIM-free. The iPhone 4S will drop to roughly $300–$400 and the iPhone 4, which would fall to $200–$300, does not fully support the graphical requirements of iOS 7 and thus is likely to be discontinued, although it may continue to hang on for a brief time after the launch of the new iPhones.

Kuo also points to the fact that shipments of the new iPhone 5S will outsell those of the 5C, owing to the new gold color casing and a new maximum storage capacity of 128 GB. The report also says that production concerns over the iPhone 5S fingerprint sensor have eased, with Apple having "a defined timetable demanding yield rate improvement for fingerprint sensor module and casing".

Both of the new iPhone models are expected to be launched on September 10, with the exact time and venue still to be confirmed.

gadgetguy03
Why would you not phase out the 4S and make your available product lineup have a standardized connector? I understand why they didn't phase out the iPad 2 (mostly because I think they didn't know how well the iPad mini would perform) but why not just eliminate the 30-pin altogether?
Score: 17 Votes (Like | Disagree)

Ya think? The iPhone 3G, 3GS had a plastic back They didn't feel cheap.

I just can't see myself buying such a plastic phone, but I'm sure it will be very successful. Feature-wise I'm sure its better than an iPhone 4S but must feel cheap.

I'm still not convinced the 5C will be the free w/contract device. I expect it to fall in the middle.

Why? Because I suspect Apple is expecting to sell lots of the iPhone 5C handsets. And by charging an extra $100 for them, they will make significantly more money.

I do expect that in a year or two, the 5C - specifically the plastic colored handsets - will become the low end option. Just not at launch.

I also think that anything with the old dock connector will be discontinued. So the iPhone 4S is unlikely to stick around.


No way is Apple releasing a phone in 2013 with only 8 GB storage. And why would the aluminum and glass 5 be cheaper than the colored plastic 5C?
Score: 7 Votes (Like | Disagree)
Read All Comments

Wednesday January 19, 2022 11:30 am PST by Juli Clover
It's now been a few months since the M1 Pro and M1 Max MacBook Pro models launched in October, and MacRumors video editor Dan Barbera has been using one of the new machines since they debuted. Over on the MacRumors YouTube channel, Dan has shared a three month review of his MacBook Pro to see how it has held up over time and how it's changed his workflow. Subscribe to the MacRumors YouTube ...
Read Full Article • 176 comments