Apple is involved in high-level negotiations with television content providers, including ESPN, HBO, and Viacom, to provide programming through 'apps' instead of channels, reports Quartz -- a relatively new business publication with a number of former Wall Street Journal reporters on staff.

It’s unclear how close these deals are to fruition. Some people cautioned that, with the TV industry in such flux, "everybody is talking with everybody." Any deal with an internet TV service like the one envisioned by Apple is likely to be under similar terms as the networks have negotiated with traditional cable companies.

Sources say Apple’s strategy could include forming its own pay TV service, essentially becoming a cable company itself, except with content delivered entirely over the internet. Intel, Sony, and Google are known to be pursuing similar tactics, and could launch their own pay TV services before Apple. 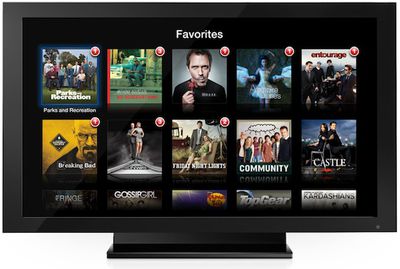 Quartz claims that Apple does want to release a much-rumored television set -- not just a set-top box like the current Apple TV 'hobby' -- to "usurp the role of the cable box" and "control the entire experience of watching TV".

The site also says cable companies have been seeking to prevent providers from signing deals with Apple, but Apple believes it does not need all content providers on board before releasing a TV set -- instead, it needs standout programming to distinguish the product and pioneer the concept of Internet-delivered video programming. The Apple TV boasted only a few content providers when it launched, but has since added a number of new content providers including ESPN, HBO, and Hulu.

A deal to offer standalone ESPN or HBO packages -- or perhaps NFL Sunday Ticket -- could "represent a tipping point" after which Apple would feel comfortable bringing the product to market. ESPN in particular has been open to the idea of streaming its live channels online as part of a standalone subscription service, something that some vocal consumers have been clamoring for -- though it's unclear how many cord-cutters would actually pay for such a service.

Previous reports have said that Apple wishes to 'erase the distinction' between live and on-demand television programming by allowing viewers to begin streaming a show minutes after it began airing live. Last month it was said that Apple was negotiating directly with cable companies and TV networks to allow customers to skip commercials, with Apple compensating for the lost ad revenue.

In his biography, Steve Jobs said he had "cracked" the redesign of television to make it seamless and easy to use, and some analysts have been claiming for years that Apple is working on a television set.

With multiple reports of Apple negotiating with both content providers like Sky News and ESPN and cable companies like Time Warner, the company appears to be examining multiple possible strategies for reinventing television.

mw360
Any word on the Pope's religious leanings?
Score: 18 Votes (Like | Disagree)

People are pretty cheap (look at all the cable cutters who always pop up in these threads wanting something for nothing), so remains to be seen how well that'll work.


Nice insult when you clearly don't understand people's motivation here. Cable cutters (I am one) don't mind paying, they just don't want to pay upwards of $80-$100 per month for a ton of channels they have no interest in watching. HBO + ESPN + Comedy Central + 5 other random channels are not worth that much. There's also the issue of not wanting to support oligopolies made up of dinosaur companies who have no clue how or desire to innovate, and actually oppose it until they are forced to act (DVRs). The cable companies have effectively halted the process of innovation in the television industry. It's well past time for a serious disruption.
Score: 16 Votes (Like | Disagree)

Tilpots
The NFL would be the game changer. I just don't want to have to buy the whole TV to get it. If the AppleTV could do it, just fine with me.

And I'm one of those cable cutters who want "something for nothing." I'm fine with ads and I'm fine with subscribing, just don't make me do both.
Score: 11 Votes (Like | Disagree)

FlatlinerG
Give me the ability to buy one channel at a time and I'll gladly pay a premium for it. I don't want to have to buy an entire package just for one channel. I want each channel to appear as a single app on my AppleTV interface and be able to be organized into folders at my convenience.

This is my dream AppleTV television experience.

time warner and comcast both offer cable + internet for $90. stand alone internet is $50. why would i spend close to $40 a month for a few channels when i could just buy the whole package and get the streaming with it as well

Because maybe I only want a few channels. And what's wrong with me "a la carte"ing myself a huge bill, at least I made that choice as a consumer. The current alternative is, "you want just that one channel? Well, it's only available if you subscribe to this package which includes 12 other channels you are going to hate and never watch. Oh, and before you can get that package you have to have our premium service/these other basic channels".

disagree
Comcast will just screw us all with internet cost.

It's nice in theory, but it'll end up costing more in practice.
Score: 9 Votes (Like | Disagree)

makes sense to circumvent the cable providers and offer individual channels/shows as apps. People are pretty cheap (look at all the cable cutters who always pop up in these threads wanting something for nothing), so remains to be seen how well that'll work.


I'm a cable cutter and I will happily pay for quality programming. I don't watch television per se, but I do watch "Breaking Bad" via iTunes, and I would watch "Game of Thrones", "Boardwalk Empire", etc. and pay a subscription. Netflix and Amazon Prime are popular, but don't have much in the way of high end programming that is current.
Score: 8 Votes (Like | Disagree)
Read All Comments