Tuesday July 2, 2013 2:55 pm PDT by Juli Clover
According to a report from Bloomberg, Apple and Time Warner Cable are close to completing a deal that will bring a TWC app to the Apple TV.

A potential partnership between the two companies was first announced in early June, when Time Warner Cable CEO Glenn Britt told investors that the company was in talks with Apple, Samsung, and Microsoft over streaming video deals that mirror the Time Warner Cable's existing partnership with Roku. 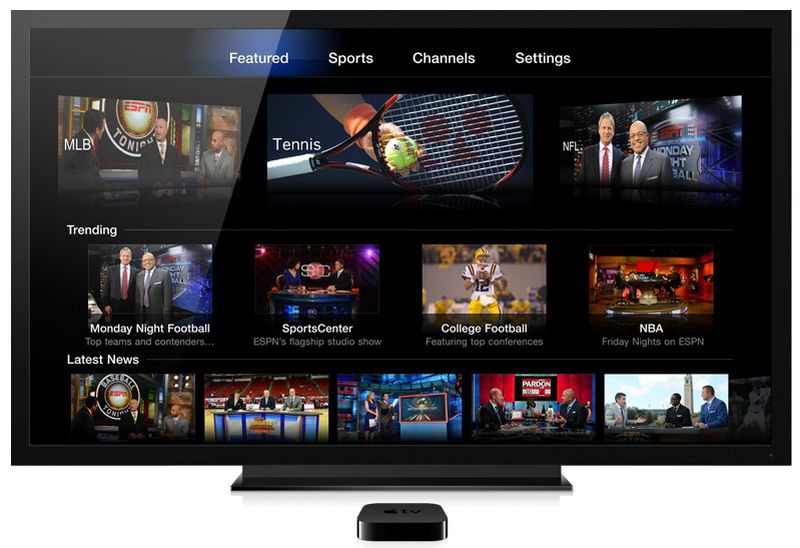 The TWC TV app available on the Roku set-top box allows Time Warner Cable subscribers to watch up to 300 live TV channels with any TV connected to a Roku. An Apple TV app would likely operate in the same way, providing cable access and live television channels to Time Warner subscribers without the need for a cable box.

Apple has been slowly expanding the content available on its Apple TV as rumors of a potential revamped set-top box or Apple-branded television set continue to gain traction. Earlier this month, the company debuted several new Apple TV channels including WatchESPN and HBO GO, both of which offer content on the Apple TV to existing cable subscribers. Apple is also said to be in talks with CW about a potential Apple TV app.

To complete the current negotiations with Time Warner Cable, Apple is said to be hiring Pete Distad, Hulu's former senior vice president of marketing and distribution. While no specific timeline is available for the release of the TWC content, a deal is expected to be announced "within a few months."

macs4nw
More content is good, but I'm looking forward to the day we no longer need that cable subscription, to enjoy all that content.
Rating: 38 Votes

Dream on, someone has to pay for that content and they're never going to give it away. Whether you pay a cable company or you pay Apple/Netflix/Hulu you will pay in some way for the content you watch, that aspect will never change.


Who said anything about free? Of course content creators/owners need to be compensated. There just has to be another way than the rigid 2 or 3 sizes-fits-all framework we now have.
Rating: 16 Votes

MattG
Great, so I'd be substituting one box for another and paying monthly fees for a bunch of channels, 90% of which I don't watch anyway. Pass.
Rating: 15 Votes

Absolutely irrelevant news to anyone outside the US, i.e. most of Apple's market. So why is this on page 1?


For the same reason a new store opening in Germany or elsewhere ends up on the front page. It has to do with Apple, not where you're from.
Rating: 9 Votes

lol at all people saying "I don't want a cable subscription!".


I think people are just tired of paying for content that they don't watch! Which is what you get with a CATV subscription.
Rating: 8 Votes

bacaramac
Fingers crossed Apple can please find a way to bypass cable companies. How awesome would it be if they treated content owners as developers and allowed us to choose programming a la carte.
Rating: 8 Votes


If Apple finds the way to effectively do a la cart TV, then they simply win.


We ALL win if this happens! (well, except cable companies, I guess...)
Rating: 7 Votes

More content is good, but I'm looking forward to the day we no longer need that cable subscription, to enjoy all that content.


Dream on, someone has to pay for that content and they're never going to give it away. Whether you pay a cable company or you pay Apple/Netflix/Hulu you will pay in some way for the content you watch, that aspect will never change.
Rating: 6 Votes