A clear photo comparing the iPhone 5 camera module to what may be the camera module for the iPhone 5S surfaced today, showing a distinct design change that may hint at a separate flash component in Apple's next iPhone. 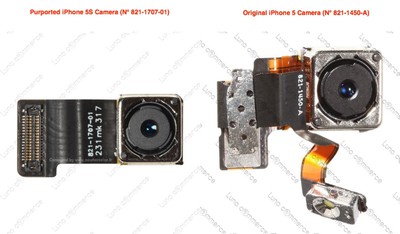 Shared by Nowhereelse.fr [Google translation], the photo of the alleged iPhone 5S camera part does not include a flash component attached via ribbon as the iPhone 5 does, which may be because the iPhone 5S is expected to come equipped with a more powerful dual-LED flash.

The camera module in the photo appears to be the same as one that was published last week and tied to the iPhone 5C, but rumors have suggested that the iPhone 5C will share multiple parts with the iPhone 5, making it more likely that the new component design is intended for Apple's iPhone 5S.

Photos of iPhone 5S components have depicted a pill-shaped dual-LED flash to replace the current circular flash on the iPhone 5. A dual-LED flash would improve the performance of the iPhone's flash, creating better lit, less harsh flash photos in low light conditions.

While the camera module does not reveal information about the camera's specs, the iPhone 5S is expected to come with a 12-megapixel rear camera with a larger aperture for improved low light photography. It is also rumored to feature a new slow motion photography mode to complement its current panoramic capabilities.

troop231
Introducing the Galaxy S5, now with quad-flash, just to say we have more than Apple.
Score: 19 Votes (Like | Disagree)

j.applewood
*throws Canon in trash can*
Score: 14 Votes (Like | Disagree)

ValSalva
If it only had a bigger sensor to go with those extra megapixels...
Score: 13 Votes (Like | Disagree)

tbrand7
This EXACT article was posted on Apple Insider about 6 hours ago. Macrumors needs to step up there game.
Score: 7 Votes (Like | Disagree)
Read All Comments