Apple's upcoming low-cost iPhone, perhaps called the iPhone "5C", may come equipped with the same 8-megapixel sapphire crystal-covered camera found in the iPhone 5, reports Chinese site IT168 [Google Translation]. The site has shared an image of what is claimed to be the iPhone 5C camera module, which appears similar to the existing iPhone 5 camera module. 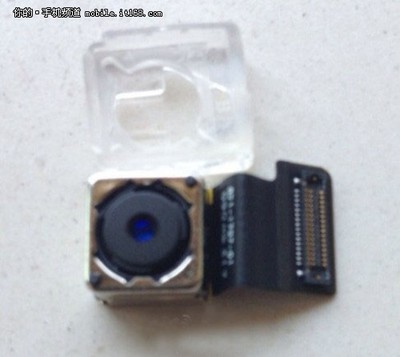 While the low-cost iPhone will potentially incorporate the 8-megapixel camera of the iPhone 5, Apple's iPhone 5S is expected to get an upgraded 12-megapixel camera that will offer improved low light photography.

Though the 5C is labeled as the low-cost iPhone, it appears that it will share other characteristics with Apple's existing iPhone 5 and upcoming iPhone 5S, offering some of the same components in a cheaper polycarbonate shell. Using similar parts prevents Apple from having to source new materials and rumors have suggested that the iPhone 5C could even be intended to serve as a replacement for the iPhone 5.

Based on leaked specs and purported casing images, the iPhone 5C is expected to feature a plastic shell in multiple bright colors. The case design appears to be more rounded than the existing iPhone 5 and it is expected to be slightly taller and larger to accommodate the thicker plastic shell, as seen in renderings commissioned by MacRumors last month.

According to the most recent report, the iPhone 5C is expected to launch in early September, alongside Apple's upcoming iPhone 5S. Estimates have suggested that it could be priced between $450 and $550, which would likely lower the price to $99 or below with carrier subsidies.

lordofthereef
I wouldn't be surprised if this new phone is essentially just the iPhone 5 in a less expensive housing.
Score: 14 Votes (Like | Disagree)

Jalopybox
12mp is just stupid. Better optics, sensors are needed. I don't need a bunch of larger file sized pics of the same quality. Not needed at all.
Score: 10 Votes (Like | Disagree)

I see this becoming higher and higher cost every time a rumour pops up
Score: 6 Votes (Like | Disagree)

ghettochris
8 megapixel is enough for me for now, I'd rather they focus on the image quality and low light sensitivity instead. My first digital camera which was 3.2 megapixels still takes better pictures than my phone due to superior optics. I say make the lens and sensor bigger!
Score: 6 Votes (Like | Disagree)

So, basically, they are going for an iPhone 5 with higher profit margins (plastic, cheap material + cheaper to fabricate) and a Lightning connector?


People here have suggested, and I for one agree, that Apple will eliminate the 4 and 4s altogether. Then there is just one screen size to worry about and no more 30 pin connectors as well.
Score: 5 Votes (Like | Disagree)

Is it only me? but I am getting the idea that the "C" version will take over the "S", and we will see wider disparity between updates from now on. We might not see the next update until next year for the iPhone 5. Wouldn't we see some rumors for the "S" yet?- haven't seen any, surely they would show up by now. We may see the new version as the "6" instead next year...

There have been tons of rumors about the 5S. Just because you're new doesn't mean the rumors don't exist. Go through the past articles.
Score: 4 Votes (Like | Disagree)
Read All Comments