First introduced at WWDC, Activation Lock is designed to prevent Find My iPhone from being deactivated, which keeps stolen iPhones from being wiped and reactivated. The feature is included in iOS 7, which is expected to be released to consumers this fall. 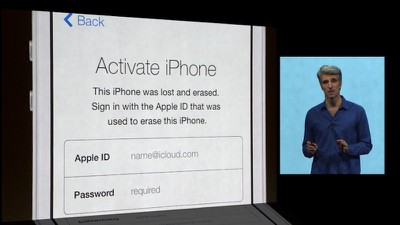 Gascón and Schneiderman are planning to bring in security experts from the Northern California Regional Intelligence Center to attempt to bypass Activation Lock in order to gain access to an iPhone. The security team will also test the Lojack for Android software on a Samsung Galaxy S4.

"While we are appreciative of the efforts made by Apple and Samsung to improve security of the devices they sell, we are not going to take them at their word," Schneiderman and Gascón said in a joint statement. "Today we will assess the solutions they are proposing and see if they stand up to the tactics commonly employed by thieves."

The two officials have pushed for greater anti-theft measures from cell phone manufacturers after a spike in mobile device thefts. While carriers agreed last year to develop a centralized database to track stolen phones, it has proven to be largely ineffectual. Both Gascón and Schneiderman have stated that they believe Activation Lock is an inadequate theft deterrent and Gascón has urged Apple to implement a "kill switch" that would permanently disable stolen iOS devices.

The results of the Activation Lock investigation are expected to be released later today.

rmatthewware
This isn't their job. Doesn't the government have more important work to do?
Score: 16 Votes (Like | Disagree)

slrandall
Why is this something the government needs to be involved in? If Apple can't protect consumers themselves, then people might not want to buy an iPhone with their next purchase.

Apple, known for jumping through all sorts of hoops to keep any remotely negative experience away from the iEcosystem, has far more incentive to deter theft than the government.
Score: 14 Votes (Like | Disagree)

nzalog
Oh so glad the government is getting involved... I mean I trust them more than Apple. :rolleyes:

This isn't their job. Doesn't the government have more important work to do?

How does this work. Do we just use find my iphone to wipe the phone?

Why is this something the government needs to be involved in? If Apple can't protect consumers themselves, then people might not want to buy an iPhone with their next purchase.


Because I'm sure they want a back door. Can't have stolen phones, but they still want on demand access to your device. Political jab aside, this is pretty unnecessary. I don't see lo-jack being mandatory on all new cars, or remote kill switches.
Score: 9 Votes (Like | Disagree)
Read All Comments