Thursday February 21, 2013 6:36 am PST by Ben Lovejoy
A newly-published patent application from Apple discovered by AppleInsider discloses a new "bracelet" accessory with a wraparound design where the screen would cover the entire outer surface. While the word "watch" is not used anywhere in the patent application, which was filed in August 2011, the "wearable video device" described in the document could clearly serve as an advanced wristwatch.

The patent application describes a "bi-stable spring" design, where the watch strap would automatically curve snugly around any sized wrist, the two ends overlapping as required. The display itself would be flexible, and the patent describes a method by which any portion of the display covered by the overlap could be automatically switched off.

The device's screen is described as having a "touch-sensitive user interface" overlaid on the flexible display, in contrast to the physical buttons used on existing smart watches like Pebble.

The design comprises a thin flexible steel band within a fabric wrap, with the screen glued to the outer surface and the electronics and battery glued to the inner surface, though it also refers to the possibility of a more robust design with a fabric frame surrounding the display. 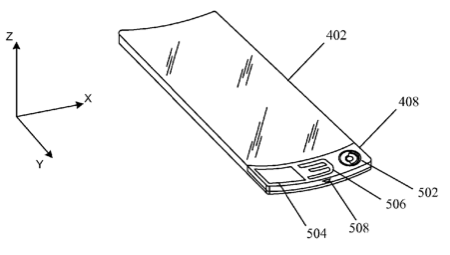 The patent application also gives clues as to the possible size of the watch, suggesting a width of one inch. though it should be noted that this refers only to the 'typical' width of such bracelets rather than any specific plan by Apple:

The most recent widespread use of such a device was the slap bracelet, also called the slap wrap. The slap bracelet consists of layered flexible steel bands sealed within a fabric cover. Typical slap bracelets are roughly one inch in width by nine inches in length. In a first equilibrium position they can be flat. The second equilibrium is typically reached by slapping the flat embodiment across the wrist, at which point the bracelet curls around the wrist and stays relatively secure in a roughly circular position.

The patent suggests that gyroscopes and accelerometers would be used to allow the watch to determine the orientation of the display, depending, for example, on whether it was worn on left or right wrist.

The patent application also lends weight to speculation that the watch would be a partner device to an iPhone rather than a standalone product, as it refers to "a method for passing information between an accessory device disposed on one surface of a bi-stable spring substrate and a portable electronic device." The watch would act as an input device as well as a display, with reference to a virtual keyboard.

While plugging in the watch to a power source appears to be the primary means of charging the battery, the patent also discusses options for solar power and kinetic charging of the battery, two technologies Apple has addressed in previous patent applications.

Many of Apple's patent applications of course never come to fruition in the form of released products, with Apple instead seeking to control certain technologies or aspects of devices that may appear in completely different forms. As a result, it is unlikely that Apple has plans to launch such a slap bracelet watch accessory, but the patent application does give some insight into what Apple has been considering as it has worked on the project.

It's happening. Here comes another revolution from apple.


Time will never be the same.
Rating: 19 Votes

AppleScruff1
I wonder if it will be water resistant? That would be important IMO if they are targeting it to the average Joe.
Rating: 12 Votes

ILikeTurtles
LMAO - those slap bracelets were all the rage back in the late 80's!
Rating: 10 Votes

G4DP
A slap on strap? They were a kids toy 20 years ago, it was a crap idea then, it won't have improved

What happens if you have a small wrist. It says the overlapping portions would be disabled...so if you had a small wrist only a small portion of the strap would function as a display...


If you had small wrists it could maybe be worn in other areas, perhaps around your ankle or on your gentleman's sausage.
Rating: 7 Votes

ironsienna
This is the next big thing! I can't wait to call my automated Google car with one of these!

Although I will definitely stay with my current hairstyle!

this has the potential to be back to the future level stuff. I have no doubt they will pull it off and while I think googles glasses are a good theory this looks like something I may actually wear
Rating: 5 Votes

AppleScruff1
Now instead of seeing people playing with their iPhones everywhere, people will be looking at their watches every 10 seconds to see if they got an update from Facebook.
Rating: 4 Votes