Apple's Smart Watch May Not Launch Until Late 2014, Use Biometrics and iPod Nano Technology

KGI Securities analyst Ming-Chi Kuo, who has on a number of occasions offered accurate information about Apple's product plans, issued a new research report this week outlining his expectations for Apple's rumored smart watch device, informally dubbed "iWatch". Despite some expectations that the device could launch later this year, Kuo believes that both hardware and software issues will result in the iWatch making its debut in the second half of 2014.

Apple may not have adequate resources to develop an iWatch version of iOS because it may require big changes to iPhone and iPad iOS this year. In addition, wearable device components aren’t mature. For these reasons, we think mass production of the iWatch is more likely to begin in 2H14, not 2H13 as the market speculates. 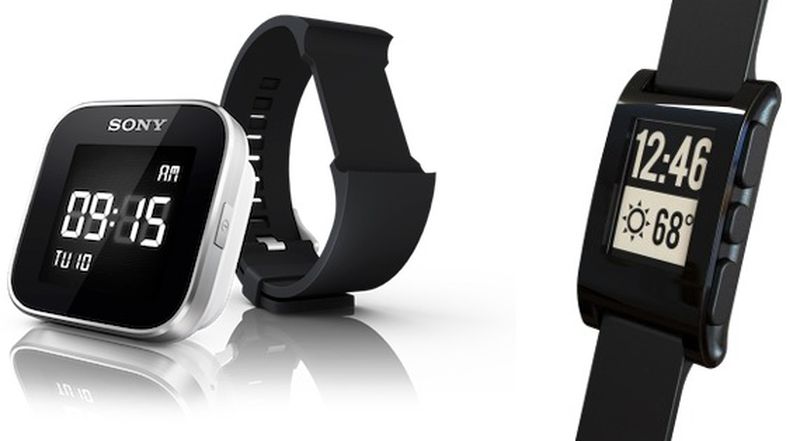 Sony SmartWatch (left) and Pebble e-paper watch (right)
On the hardware front, Kuo projects that the iWatch will use a 1.5-2.0 inch display and unsurprisingly believes that Apple will draw on the iPod nano when it comes to components, particularly with respect to the main processor and the touch technology.

Further, Kuo believes that biometrics will be a key feature for the iWatch, allowing for increased security and opening the door to broader health-related applications. The biometric support should also aid in building out the cross-device integration many expect to see from the iWatch.

Rumors regarding Apple's smart watch project have been relatively quiet over the past few months, although a report from earlier this week claimed that Apple is testing 1.5-inch OLED displays for the device, with Foxconn said to be gearing up for a trial run of 1,000 devices.

that1guyy
So pathetic Apple can't do anything. No mac pros: delayed indefinitely. Their damn radio thing can't even launch. And now the stupid iwatch isn't coming. And what about iwork, ilife, aperture, logic pro? What has Tim Cook been doing?

What's next, a mini ipad with a retina display that should have been included in the original? A few spec bumped macs? The same iphone with an S in front it? IOS7 will probably play it safe and OSX will be the same thing but bloated even more. What happened to innovation?
Score: 58 Votes (Like | Disagree)

Couldn't have put it better myself! The Apple I once knew and loved disappeared a long time ago (whilst meanwhile I'm loving my S4 and windows 8 laptop!)


So why are you still hanging out in an Apple forum?
Score: 24 Votes (Like | Disagree)

So pathetic Apple can't do anything. No mac pros: delayed indefinitely. Their damn radio thing can't even launch. And now the stupid iwatch isn't coming. And what about iwork, ilife, aperture, logic pro? What has Tim Cook been doing?

What's next, a mini ipad with a retina display that should have been included in the original? A few spec bumped macs? The same iphone with an S in front it? IOS7 will probably play it safe and OSX will be the same thing but bloated even more. What happened to innovation?


All this ranting based on speculation from Wall Street analysts who know absolutely nothing about Apple's product pipeline? Sorry, but Ming-Chi Kuo has no inside knowledge about anything. It's all speculation and guessing.

And please explain how retina could have been included in the current iPad mini form factor for $329. It's so easy for people to make emphatic statements when they're not the ones designing or engineering these products.
Score: 24 Votes (Like | Disagree)

So pathetic Apple can't do anything. No mac pros: delayed indefinitely. Their damn radio thing can't even launch. And now the stupid iwatch isn't coming. And what about iwork, ilife, aperture, logic pro? What has Tim Cook been doing?

What's next, a mini ipad with a retina display that should have been included in the original? A few spec bumped macs? The same iphone with an S in front it? IOS7 will probably play it safe and OSX will be the same thing but bloated even more. What happened to innovation?

1. Mac pros weren't delayed. You never had a release date.

2. Radio isn't delayed. You never had an announcement, let alone a release date.

3. Watch isn't delayed. You never had an announcement, let alone a release date.

4. Retina iPad mini was likely impossible at the time of release. Or at least so prohibitively expensive, that it was unfeasible.

5. They gave you the highest resolution laptop ever last year, did you buy one?

6. I did some research, and found that the "s" model phones actually have substantial improvements. Who knew?

7. They are obviously working on new versions of iWork, as they've been hiring people for the project.
Score: 21 Votes (Like | Disagree)

Don't make me laugh, New Products, Apple ... Apple only makes money these days by tax evasion and suing competitors in court. Makes sense then that any new product isn't even available for at least a year (giving competitors time to beat Apple to market and thus giving Apple more ammo to jump back into court again!!!)


No, they are currently making money off of the the products they sell. They haven't made any money from their lawsuits, and they legally minimize their tax burden (evasion implies not paying what is owed).

Mad Mac Maniac
It just seems like all new Apple product timelines just keep getting pushed back and back (by analysts). They figure that gives them more time to come up with excuses if they are wrong.
Score: 21 Votes (Like | Disagree)
Read All Comments