Russian newspaper Izvestia reports [Google translation, via AppleInsider] that Apple has filed for a trademark [Google translation] on the term "iWatch" in Russia, supporting rumors that the company is planning to launch a smart watch as soon as later this year.

The Russian trademark filing, made on June 3 through law firm Baker & McKenzie, claims a priority registration date of December 3, 2012 in Jamaica. Apple and other companies frequently file first in Caribbean countries such as Jamaica and Trinidad & Tobago where records are not easily searchable online, using those priority dates to help secure protection in other countries at later dates. 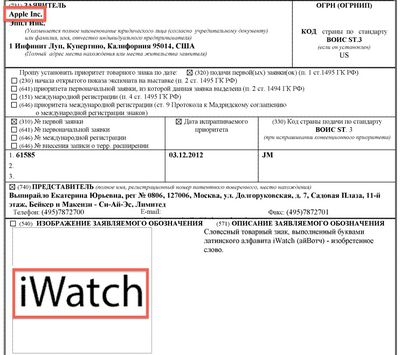 According to the filing, Apple has applied for protection on the "iWatch" name in two trademark classes: Class 9, which includes computers and peripherals; and Class 14, which includes various types of jewelry such as watches.

Drawing from Apple patent application for a "slap bracelet" video accessory resembling a smart watch
Izvestia reports that Apple faces a bit of competition for the iWatch name in markets around the world, including in the United States where multiple companies have received trademarks on variations of the term in Class 9. Even in Russia, another company's 2011 application for the iWatch trademark in Class 14 was denied due to similarities to an existing "iSwatch" trademark held by Swiss watchmaker Swatch.

While efforts by Apple to protect the "iWatch" name are suggestive of plans to launch such a product, they are by no means definitive. In the lead-up to the iPad launch, we discovered that Apple had been seeking to secure rights to iSlate trademarks and domain names, only to later discover evidence that it was also protecting the iPad name. Both of those efforts were performed with the use of dummy corporations designed to hide Apple's role in securing the names, but it appears that Apple is not resorting to such measures with the iWatch name.

(Thanks to Anastasia Spilnick of PATENTUS for directing us to the actual filing.)

I'd be embarrassed to wear any type of watch in public including the iWatch.


Uhhh, why? Are you embarrassed to wear hats, sunglasses, your wedding ring, or clothing in public?
Score: 13 Votes (Like | Disagree)

Uhhh, why? Are you embarrassed to wear hats, sunglasses, your wedding ring, or clothing in public?

Hahaha, exactly. Embarrassed to wear a watch is definitely the "Silly Post of the Week" :D
Score: 11 Votes (Like | Disagree)

Hmmm to me a watch is more about fashion. I don't really understand why I would want a smart watch when I have a smart phone sitting in my pocket that does the same things better and with a bigger screen.
The only benefit would be for working out and it having bluetooth or some type of wireless audio and have storage so I don't have to carry my phone on me. also relaying and tracking heart rate would be handy.

Still probably not worth what I'd have to spend on it I'll just keep using my phone for music when I work out. Its not that heavy. :p


A few years ago people would have said "I don't understand why I would want a smart phone when I have a laptop sitting on my desk that does the same things better and with a bigger screen." ;)
Score: 8 Votes (Like | Disagree)

chainprayer
I should trademark the iPatch before they come out with that too
Score: 8 Votes (Like | Disagree)

I'd be embarrassed to wear any type of watch in public including the iWatch.

spacehog371
Have to say... I think Apple may pull something out of the hat on Monday. The WWDC invitations seem to me to hint at a watch. Roman numerals, and the first W is cut off and looks to me like it is meant to look like a watch hand.
Score: 6 Votes (Like | Disagree)
Read All Comments