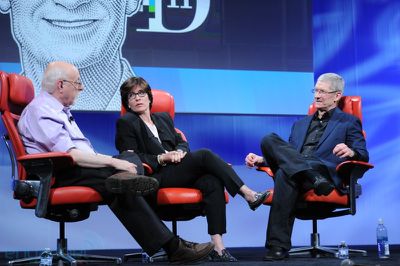 Hours after Apple CEO Tim Cook's talk with AllThingsD's Kara Swisher and Walt Mossberg, AllThingsD has posted the full video of the interview online. The 81-minute video contains the full interview in addition to the Q&A session that followed. MacRumors provided live updates of the event. Last year it took several weeks for the full video to find its way online.


Steve Jobs was a regular participant of the D conference, having been interviewed on the stage and even appearing alongside Microsoft co-founder Bill Gates. Cook has carried on that tradition by serving as the opening session interview for the past two years.

Among the topics discussed by Cook yesterday:

- Apple Television - There Is a Grand Vision
- Wearables Are Incredibly Interesting, Nothing Great on the Market
- Executive Change Up Has Been "Great", Revamped iOS/OS X to Be Unveiled at WWDC
- Apple to Open Up APIs in the Future, but No Chat Heads
- Apple Hires Former EPA Chief Lisa Jackson to Oversee Environmental Efforts

Byrnes3969
Let me save you all a lot of time

Tim: We're still doing ok, I'm alot like Steve. We have really exciting products coming out. But I'm not going to say what, when or how much.

Walt: Thanks for being on the show. Good Night.
Score: 35 Votes (Like | Disagree)

I'm sorry to be critical, because I certainly have many flaws that could be picked apart. But from a purely professional standpoint I feel that Kara Swisher does not seem qualified to conduct these interviews. It comes across as though she doesn't have the technical knowledge necessary and I would even argue many of her questions seem juvenile, haphazard, or off-topic.

I certainly don't know this nice woman or her background in the technology industry, this is just how it comes across to me.
Score: 33 Votes (Like | Disagree)

Tim: We're still doing ok, I'm alot like Steve. We have really exciting products coming out. But I'm not going to say what, when or how much.

Walt: Thanks for being on the show. Good Night.


We KNOW that Apple is secretive and Tim Cook won't answer questions about Apple's future.... so why not ask questions about the past that he CAN answer - like his relationship to Steve Jobs, how he came to Apple, the Apple work environment, his transition to CEO, what working with Jonny Ives is like... etc. etc. etc.
Score: 12 Votes (Like | Disagree)

Jobsian
I like Cook. He conveys as being genuinely pleasant as opposed to the psychopathic superficial charm you sometimes see in other CEOs ;)
Score: 12 Votes (Like | Disagree)

JesperA
Its weird to look at a video where Tim Cook doesnt have the most annoying voice.

That women, seriously, i cant stand her, she behaved the same way when they did D10 with Steve Jobs, she always asks the most stupid questions imaginable, she live in her own bubble, it almost looks like she doesnt even know who she is or where she is "Who am i, what am i doing here", she doesnt even seem to understand anything that Tim is saying, she keep reaffirming what Tim is saying, when Tim is talking about the iPad and had said the "iPad" for the 1000 billions time, she aks "You mean with the iPad???", she keeps asking questions that everyone know that Tim would never answer because its a secret. Everytime she ask something, she just goes on and on and one, instead of just saying "What time is it", she would go "What time is it? Do you have a clock, what time is that clock? Is that clock a standard clock and if so, what time is that? If that clock was red instead of white, what time would it be? Who am i, what am i doing here?"

Why is she still there with Walt, she gives no added value.
Score: 11 Votes (Like | Disagree)

Jay42
As much as I'm interested in what Tim has to say, Kara Swisher is almost intolerable.