Bloomberg today published a story on the much rumored Apple smart watch, offering information on potential functionality and profitability. The article also hinted at possible design cues for the iWatch, highlighting Apple designer Jony Ive's intense interest in watches, specifically those manufactured by Nike in the mid-2000s.

Apple design chief Jony Ive has long had an interest in watches. Besides owning many high-end models himself, he had his team visit watch factories and ordered boxes of a sports watch made by Nike Inc. in the mid-2000s, said Wilson, who was then Nike's creative director.

Both of these watches feature clean, simple designs. The Presto Digital Bracelet is a cuff-style wraparound watch with a translucent plastic body, while the Oregon Series Alti-Compass has an aluminum face.

Well, he didn't buy them. We just gave them to them as designer bro deals. He and others in the design group just requested them and we sent them a ton of Nike Presto Digital Bracelets and the aluminum Oregon Series Alti-Compass watches. Was flattered that they were requesting them.

Wilson goes on to say that after receiving the watches, Apple asked questions about materials and processes.

This meshes up with their research in watch manufacturing during that timeframe which has been documented in previous stories. They definitely drew upon watch industry techniques and manufacturing in their products since the first iPhone. Interesting that it may come full circle to an actual iWatch at some point.

A patent application found last week suggested that Apple might be looking at a watch with a wraparound design, a touchscreen, and a flexible glass display, but it remains unclear what the actual watch might look like.

Apple is said to have a team of 100 product designers working on the watch. The watch is rumored to run the full version of iOS and though a release date remains unclear, Bloomberg has suggested that it could launch as early as 2013.

adder7712
Should've bought these instead. 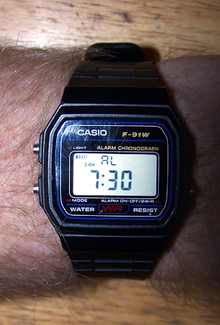 johncrab
As a Certified Master Watchmaker, I can attest to major changes in the way watches are perceived. Just since the 90's when Rolex and others of that level sold everything they could produce, the market has changed. Watches are unitaskers. They tell the time. A 100k$ Swiss watch may tell you the phase of the moon and the time in Moscow but it's still a time instrument. Watchmaking is retreating to the high ground as manufacturing technology make sever fancier models possible at ever more extravagant prices. But watch purchases are declining. it's a piece of jewelry to most who still wear them. Most people who wear a five-figure watch will check the time on their smartphones. One client came in with his fancy calendar watch and joked that he had been wearing it for two weeks before he noticed it had stopped working.

There is a market for something new and better. A wrist data center would open up a whole new market that others can only scratch at. If Apple is working on such a product, I think the time is just about right for it. Like the iPhone, there will be a discovery process of customer and manufacturer learning what is possible and what is wanted. But the time is coming soon.
Score: 12 Votes (Like | Disagree)
Read All Comments