Tuesday January 8, 2013 6:38 am PST by Eric Slivka
Bloomberg reports that Apple CEO Tim Cook is in the midst of a return trip to China, some ten months after his last trip to meet with government and business leaders.

Cook today met Miao Wei, head of the Ministry of Industry and Information Technology, to talk about the development of China’s information technology industry, global mobile communications and Apple’s business in China, according to a statement posted on the ministry’s website.

The report notes that Apple has nearly doubled the number of its retail stores in China and Hong Kong since Cook's last visit, having opened five new stores for a total of 11 company-owned stores in the region. 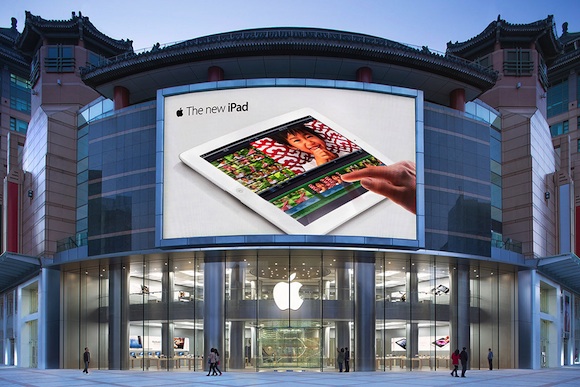 Cook's schedule for the remainder of his visit has not been released, although The Next Web notes that U.S. embassy Chief of Staff Jim Scuitto posted a Tweet revealing that Cook had met with U.S. ambassador Gary Locke.

There will also undoubtedly be speculation that Cook may be seeking to finalize an iPhone deal with China Mobile, the world's largest carrier and the only one of China's three major state-owned carrier to not officially offer the device. Cook had visited the carrier's headquarters in June 2011, but no deal has yet been announced amid continuing negotiations.

China Mobile is reportedly losing traction with 3G customers as rivals China Telecom and China Unicom have made inroads, with many believing that China Mobile's lack of the iPhone is a major weakness for the carrier.

MonkeySee....
The picture of the Wangfujing retail store in Beijing is stunning.

Makes sure those Foxconn workers are being treated properly while you're there Timmy.


On average, 11,000 workers are injured and 13 are killed on the job every day in America according to OSHA, and you're concerned that Tim Cook is personally making sure that Foxconn workers are being treated properly? Good grief!
Rating: 5 Votes

I wonder why that iPad billboard is in english...

Because China has more english-speaking citizens than America has citizens.
Rating: 4 Votes

I wonder why that iPad billboard is in english...


Pretty much anyone able to afford the iPad in China knows English.
Either as mother tongue, tourist or "rich kid" (in relation to the rest of China).


Am I the only one who looks at that as a failed attempt at using traditional Chinese architecture with Apple's tired "it's all glass" look, marred with a "Times Squarish" giant LED ad screen.

It's horrible. It's truly dreadful. Apple has lost its way....

The night shot is kind of cool though - since all the other crap disappears.
Rating: 2 Votes

The picture of the Wangfujing retail store in Beijing is stunning.

On average, 11,000 workers are injured and 13 are killed on the job every day in America according to OSHA, and you're concerned that Tim Cook is personally making sure that Foxconn workers are being treated properly? Good grief!


How many of those are employed by Apple or by a company which completely relies on Apple's business and are not covered by US health and safety law? He is in a position to directly impact the lives of Foxconn employees and I think he should use that position to ensure that their conditions are acceptable.
Rating: 2 Votes

ryuok
Tim is there to find out what happened to his egg fried rice order. :D
Rating: 2 Votes

iMikeT
Makes sure those Foxconn workers are being treated properly while you're there Timmy.
Rating: 2 Votes