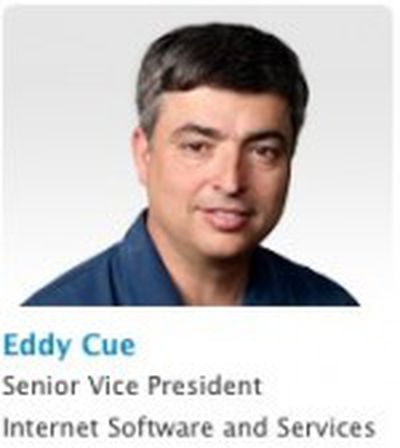 As revealed in a new filing with the U.S. Securities and Exchange Commission, Apple has awarded Eddy Cue an additional 100,000 shares of company stock in the form of restricted stock units. The stock units were issued on November 2nd and will vest in September 2014 (25,000 shares) and September 2016 (75,000 shares) if Cue remains employed by Apple at those milestone dates.

At Apple's present stock price, the stock would be worth $40 million, although the final value will be determined as of the dates that the different portions vest.

This is the second such grant Cue has received since being promoted to senior vice president for Internet software and services two months ago. The first batch of 100,000 restricted stock units was awarded on September 2nd following his promotion, and those units will vest in two equal portions in August 2013 and August 2015. Cue also holds a number of other restricted stock units that he had been awarded prior to his promotion.

Cue has been at Apple for 22 years, and played an integral role overseeing the iTunes Store and App Store. His role has significantly expanded over the past year or so, adding oversight of Apple's iCloud service and iBookstore. Just this past August, Cue also took over leadership of the iAd program following the departure of Andy Miller.

give it a pass because it's Apple


Why not just put that in your signature? It would save you a lot of typing.
Score: 5 Votes (Like | Disagree)

Well this link has more details. In fact, other executives are getting 60 million dollar bonuses as well:

I'm not saying these guys don't provide a great deal of value to Apple--they do and deserve to be rewarded. I have a problem with obscene amounts of money being paid to *individuals*. 60 million? That's the yearly operating budget of many struggling public universities. We distribute our resources foolishly and we will pay the price someday.

There's another way to look at this... and it's potentially an indication that Tim Cook feels his senior execs are currently at risk of leaving, following Jobs' death.

These aren't bonuses for work done - they're 'golden handcuffs' to stop them from leaving for 2 years (they all seem to vest in mid 2013).

For a bunch of rich guys who were highly motivated by Jobs presence, I would have expected a few to leave pretty quickly. Apple is great 'n' all, but if you take away Jobs' charisma, it's just a job - and there are plenty of other exciting challenges in the valley.

Depending on how you see things, this is good news, because it buys stability for the company for the next two years - or it's bad news, because it's an indication of Tim Cook's weakness as a leader and motivator that he feels this is necessary.


Edit: In my personal experience, working in companies that have a 'bonus culture' - bonus is rarely about a job well done, it's more judging a person's greed/sense of self-worth and the risk of them leaving if they feel undervalued.
Score: 4 Votes (Like | Disagree)

Anaemik
I would have hoped that somebody getting his 2nd $40M windfall in <3 months would be doing an awesome job of things like not screwing up the iCloud rollout, not breaking MobileMe for days at a time, and allowing users to merge Apple IDs. Obviously I live in some kind of dream world.
Score: 3 Votes (Like | Disagree)

Couldn't agree more. Reward those who perform well but this is just insane.

No, Steve Jobs made Apple money and unfortunately he's gone now. These guys will leave Apple shortly after they are fully vested.

Hey, its not like Apple is different in this regard than any other corporation -- but publicizing someone getting a 40 million dollar bonus is hard for the average unemployed Joe to understand -- and underscores the tragic gulf between the ridiculously rich and the majority who are struggling.


He's been with apple for 22 years, in that time he's worked for a number of different CEOs and went through some of apples hardest and most successful times.

PowderPC
I know for some options, you only get the difference between the company's value now and later. So, say u get 1 option and the price is 400 now and goes up to 425 at vesting time, u get 25 dollars, not 425. If its negative u obviously dont have to pay...These aren't options...they're outright grants, albeit with vesting restrictions.
Score: 2 Votes (Like | Disagree)
Read All Comments