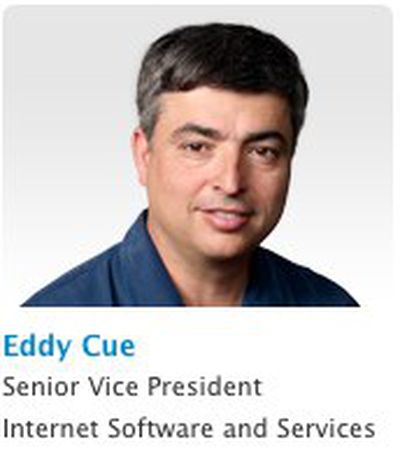 In recognition of Eddy Cue's promotion to Senior Vice President of Internet Software and Services, Apple has awarded Cue 100,000 restricted stock units with half vesting in 2013 and the other half in 2015, pending continued employment through the vesting dates.

This stock is worth $37.4 million at current prices.

A restricted stock unit, or RSU, is a form of compensation valued in terms of company stock, but the stock is not issued at the time of the grant. It instead vests at a later date pending continued employment with the company.

Additionally, as a new officer in a publicly traded corporation, Cue has submitted an SEC Form 3 or "Initial Statement of Beneficial Ownership of Securities" with the SEC. This document shows what stocks and options Cue holds as a senior vice president of Apple, Inc. Cue received 76,250 RSU's over the past four years, presumably as part of his yearly bonus.

As a shareholder in Apple I don't like how Apple handles these bonuses.

The right way would be that Apple used its cash and bought these shares and gave as bonus.

HTC did the right thing: They used their profits to buy 5% of its own shares. 50% of them they destroyed and 50% for bonuses.

This way both share holders and the bonus takers make a profit.

Now Apple just dilute the share = my shares are less worth.

(An if Apple believes in them self, they should buy loads of share at this low price today. Trailing PE of 10 is insane for a company like Apple. Amazon has about 100 PE. )

So you think Apple should have a stock price that reflects a PE ratio of 100!?

Moreover, by issuing more stock, their earnings per share would actually go down which would make their PE ratio go up. So which one do you want?

Also, Amazon and Apple aren't exactly in the same industry, so you shouldn't be comparing their P/Es anyway. But what's hard is comparing them to any company, because they have no direct competitors on all fronts, you know? But let's look at some simply comparisons in the way of P/E:

Again, it's kind of hard to say where Apple should fall in this category, but even if you include Google in your stats (P/E 18.93), it's no where near 100 P/E. Apple is in a relatively mature industry - low P/Es are expected in mature industries. I think their P/E is right around where it needs to be.

Basically...I guess I wouldn't buy Amazon. I mean, surely you can look at those numbers and see how crazy that is: Amazon's share price is $210.00, yet they're only earning $2.27 on each share? I know they're supposed to come out with a tablet and have proven their business model, but my god...that just seems insane.

I will agree with you on one thing: stock buybacks are good for pretty much everyone, especially when you can do so with cash (unless your company is small and you need to issue debt for protection of being taken over, in which case that can advantageous...but that's another story). But at this point...Apple's such a solid stock, they can do whatever the Hell they want.
Score: 2 Votes (Like | Disagree)

it would be nice to think of the employees...

they are working their ass off too...

ro rewards for them :mad:


You mean besides their pay check? And any bonuses given annually?
Score: 2 Votes (Like | Disagree)


Scarcity alone never drives up the price of anything. As a matter of fact, owning the only telephone in the world makes it valueless.

The advantage of buying back shares arises when following the buyback the company's value increases. That increased value will be shared by fewer shareholders, resulting in a greater increase in the share price. Of course, if the company becomes less valuable, the loss in value will be spread over fewer shares, resulting in a greater loss in price per share than would have resulted in the absence of the buyback.

If the board believes that earnings will increase, and fully discloses the reasons for its optimism, it is appropriate to buy back stock from those shareholders who are unpersuaded and, if their optimism turns out to be justified, then those who refused the buyback offer will be rewarded.

Buying back shares to award them to employees is silly. If the share bonus successfully motivates employees to create more shareholder value, then the "dilution" from issuing shares to them should be at least offset by the increased value they have created. If they haven't created enough shareholder value to "pay for" the shares they receive, then they haven't earned the bonus shares.

Unless a company is constrained by insufficient authorized shares, there is no reason to buy back shares to deliver them to employees.
Score: 1 Votes (Like | Disagree)

RoelJuun
I guess some of my money will be well spent by these gentlemen.
Score: 1 Votes (Like | Disagree)
Read All Comments