Internet Recovery launched as part of OS X Lion in July, allowing users to easily install the operating system on a blank hard drive, a feature that is handy for users who are replacing their hard drives or for whom the recovery partition included on their Lion system becomes inaccessible. Internet Recovery functions by adding a minimal bootable install onto a machine's firmware to allow it to connect the Internet and download the full Lion operating system for installation. 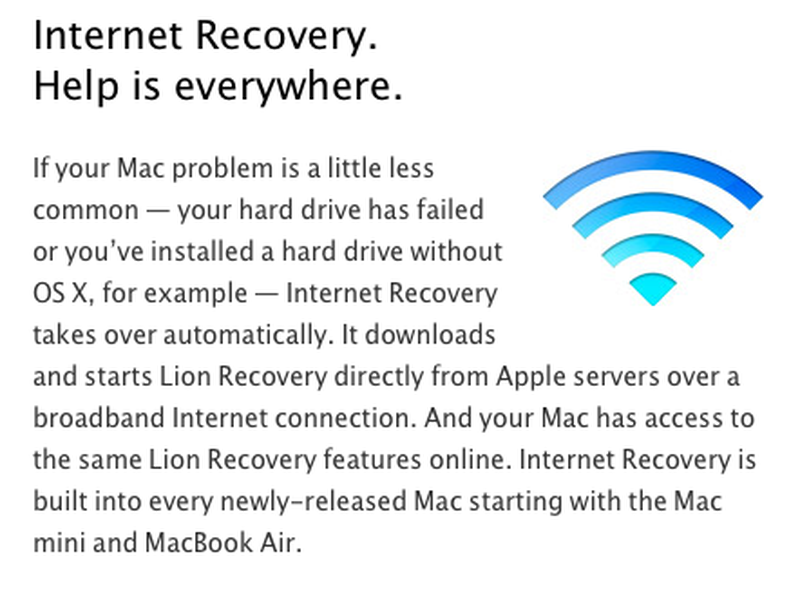 Internet Recovery initially debuted on the MacBook Air and Mac mini models that were released alongside OS X Lion, but was extended to the Early 2011 MacBook Pro line last month. With the addition of the iMac, all of Apple's current Mac models with the exception of the Mac Pro are now capable of accessing Lion Internet Recovery. The Mac Pro has not been updated since mid-2010, and delays in Intel's chip production appear to have pushed any refresh into next year.

SmileyDude
What's up with the picture of the bondi blue iMac on that support page for the EFI update?
Rating: 9 Votes

What's up with the picture of the bondi blue iMac on that support page for the EFI update?

Have you tried clean-installing Lion? When I had my MBP, I had a clean install, and never experienced any of the internet connectivity issues. :apple:


I thought that reformatting the drive to fix software problems was only a Windows 95 issue.... ;)
Rating: 2 Votes

I thought that reformatting the drive to fix software problems was only a Windows 95 issue.... ;)


Ten Points... that was so funny it was the best laugh I've had all day, and I've had some good ones. :D
Rating: 1 Votes

I'll bet you forgot to run Utility Disk Permissions before you ran the update. It's a good idea to do that before every update.

LimeiBook86
I'm happy to get the Internet Recovery option on my 2011 iMac. I was starting to feel left out. ;)


Me too (attached below in case Apple fixes it) :p


Awesome! This introduced a display backlight flicker to my 27" iMac though :/

It seems to disappear after a few minutes of uptime though so its not very huge. Even though i think it is really weird and i hope it won't harm the display.

Anyone else with this problem? PRAM and SMC reset don't change anything.


When I perform the update with my iMac I'll let you know if it does the same. Although I'm a bit hesitant now...
Rating: 1 Votes

Porco
It's a good option to have, but I can't help thinking it'd be more useful if the iMac's internal hard drive was more easily replaceable by ordinary users.
Rating: 1 Votes

What's up with the picture of the bondi blue iMac on that support page for the EFI update?

aberrero
Why no support for the 2010 MBA?
Rating: 0 Votes