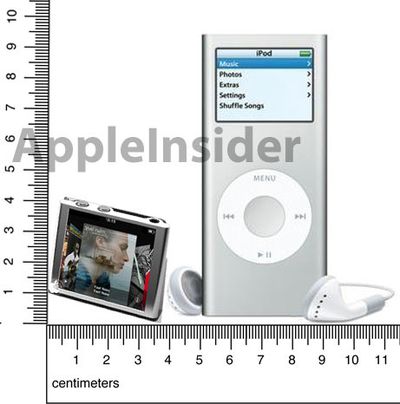 People familiar with the matter indicated that the size and shape of the device, revealed this week through photos of third-party cases, will be more akin to the iPod shuffle than the current-generation iPod nano. Even with this small size, however, it is expected to have a traditional iPod dock connector, allowing compatibility with the existing iPod accessory ecosystem.

The new iPod nano is said to utilize a tiny 3cm-by-3cm display that was revealed in its bare form as unknown Apple-branded component earlier this summer. For comparison, the second-generation iPod nano had a screen that was about 3cm by 2.5cm.

In addition to the iPod nano, the report notes that Apple has been toying with plans to release a version of the iPod touch offering 3G cellular data access. The company is said to have begun seriously considering the idea after seeing the success of the 3G-capable version of the iPad released earlier this year, and prototypes of 3G-capable iPod touches are claimed to be in existence.

Finally, rumors of an update to Apple's iLife suite persist, with today's report suggesting that a portion of next week's media event might be devoted to a new version of Apple's multimedia suite. With Apple having moved to an approximately 18-month release cycle over the last few versions of iLife and the current version having been released in early 2009, an update in the near future would be a reasonable guess. One claim from late last month predicted an August 17th release for "iLife '11", which is rumored to see the discontinuation of iDVD, a significant revamp of iWeb, and a new "mystery" application. The claimed release did not, however, occur on the predicted date.