The embargo has lifted on reviews of Apple's new AirTag item tracker, although they are more like first impressions given that media outlets and YouTube channels had less than 48 hours of hands-on time with the small new device. 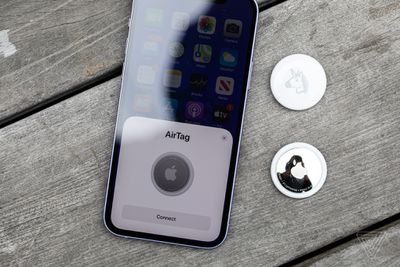 Image Credit: The Verge
AirTag will be available to order starting this Friday, April 23 at 5 a.m. Pacific Time in most countries, and it will begin arriving to customers on Friday, April 30. Priced at $29 each or $99 for a four pack, users can attach AirTags to personal belongings like a wallet, keys, purse, or backpack and then keep track of the location of those items in Apple's built-in Find My app on iPhone, iPad, and Mac.

We've already rounded up some AirTag unboxing videos, and below we've gathered some more in-depth opinions from AirTag reviews.

The Verge's Dieter Bohn said the AirTag as "smart" and "capable" for users who already live in Apple's ecosystem:

Really, the AirTag is the Most Apple Product I've seen in a while. It's just a little more expensive than the competition. It's beautifully designed, but its hardware still somehow fails to actually take the practical realities of our dirty, messy world into account. It's very privacy-focused. It really only works with Apple devices. It offers features that no third-party device can really match thanks to Apple's tight integration (or tight grip on its APIs, depending on your point of view). And since there's no Android version of Find My, it's another piece of the Apple ecosystem that's going to keep you from switching.

An AirTag is a very Apple-y thing for Apple users who already live in Apple's ecosystem. They work great — and will be great at keeping you in Apple's world.

In the video below, Bohn provides a closer look at the AirTag setup process and then goes on a hide-and-seek adventure in New York City to test out its capabilities:


TechCrunch's Matthew Panzarino said it often took 30 seconds or more to get an initial location from an AirTag in another room, but he said location tracking was extremely accurate down to a few inches:

In my very limited testing so far, AirTag location range fits in with that basic Bluetooth expectation. Which means that it can be foiled by a lot of obstructions or walls or an unflattering signal bounce. It often took 30 seconds or more to get an initial location from an AirTag in another room, for instance. Once the location was received, however, the instructions to locate the device seemed to update quickly and were extremely accurate down to a few inches.

Mashable's Brenda Stolyar was less excited about the AirTag, but she did praise their Precision Finding feature that uses the built-in U1 chip and accelerometer from the AirTag, along with ARKit and the gyroscope from the iPhone, to guide you towards the AirTag with an on-screen arrow, haptic feedback, and sound.

Bluetooth trackers aren't new. Companies like Tile, Chipolo, and Orbit have been pumping them out for years — but leave it to Apple to turn them into a must-have accessory.

Sure, for iPhone users it means seamless connectivity that works with Apple's Find My app. But at its core, it's still nothing more than a Bluetooth tracker.

Precision Finding is limited to Apple devices with the U1 chip for Ultra Wideband, including all iPhone 11 and iPhone 12 models.

Been using Tiles forever. Used them on my older iphones and on my new Pixel. This does nothing a Tile can't do. The Tile Slim fits in my wallet and has saved my ass several times. Tiles can ring my Android phone as well.

Not sure what the Apple differentiator is here other than "me too."

The differentiator is the mesh network for items you lose out there in the big wide world. Suddenly every iOS device is looking for your item rather than just everyone who has the Tile app running. I'd guess that increases the chances of locating your item at least a thousand-fold.
Score: 37 Votes (Like | Disagree)

This is what kills it for me.

My PRIMARY use case for an AirTag was going to be burying one deep in my backpack, so if it got stolen I'd be able to track where it is. If it's going to tell the thief it's there, what's the point?
Score: 15 Votes (Like | Disagree)

This is what kills it for me.

My PRIMARY use case for an AirTag was going to be burying one deep in my backpack, so if it got stolen I'd be able to track where it is. If it's going to tell the thief it's there, what's the point?

I think at that point you're talking about a stealth tracker, and it's impossible from Apple's end to separate a legit use (like your stolen backpack scenario) from a stalkery use (planting it in someone else's backpack).

Anyway, the reality of something like a bag being stolen is that the thief is going to quickly pluck out anything valuable and discard the rest so they don't get caught with it.
Score: 15 Votes (Like | Disagree)

dugbug
"And since there's no Android version of Find My, it's another piece of the Apple ecosystem that's going to keep you from switching."

Friday February 26, 2021 1:32 pm PST by Juli Clover
SwitchEasy recently came out with a series of "MagEasy" accessories that are designed to add MagSafe compatibility to older devices or to iPhone 12 cases that aren't equipped with built-in magnets. The MagDoka is a circle-shaped magnetic ring that attaches to an iPhone or an iPhone case using adhesive. At 2mm in thickness, the MagDoka doesn't add a lot of bulk to an iPhone, and in my...
Read Full Article • 29 comments