iOS 14 brings Picture in Picture mode to the iPhone, allowing movies, TV shows, and videos to be watched in a small window while you do other things on your ‌iPhone‌. 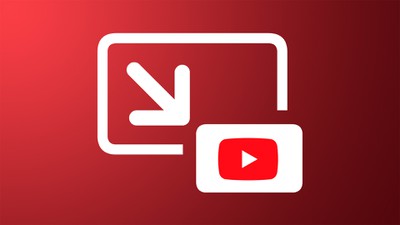 iOS updates are a scam. Apple brags about 99% of users on latest ios version but apps don't take advantage of new iOS features.

iOS 14 hasn't even been released yet, it literally just went into beta a few weeks ago so give them some time to update the app

PIP has been available on the iPad for years, and still they don’t support it. I wouldn’t expect Google to implement it on the iPhone quickly. I just have zero faith that it’ll ever happen.

Solutions like the one in the article are extremely helpful. Though when I watch YouTube I tend to let it auto play the videos. After all these years of watching my up next or whatever has become really good. It sucks having to go back and forth each time a video ends.
Score: 10 Votes (Like | Disagree)

macbeth1026
YouTube needs to get their **** together. I pay for premium yet I still don’t get a basic feature like this?

Edit: I should be more clear. I was referring to PIP as a whole with YouTube. I’m aware if they did miraculously decide to implement PIP it would take time to come to the iPhone. I was more so referring to them dragging their feet on the iPad side.
Score: 7 Votes (Like | Disagree)

iOS 14 hasn't even been released yet, it literally just went into beta a few weeks ago so give them some time to update the app

Yeah, give them some time. We've only been waiting for *checks calendar* five years for Picture in Picture to come to iPad's YouTube app.

iOS updates are a scam. Apple brags about 99% of users on latest ios version but apps don't take advantage of new iOS features.

That's the lazy developer's fault, not Apple's. They give developers all the resources they need to update.
Score: 6 Votes (Like | Disagree)

Luch4iphones
Just click full screen and then swipe up to go home. ✅

i feel ya.. but I'm sure this will come when iOS 14 is fully released.

Doubt it, iPad has had PIP a while now and still can’t work on the app
Score: 5 Votes (Like | Disagree)
Read All Comments

Monday August 3, 2020 3:14 am PDT by Tim Hardwick
Apple last week confirmed that its "‌iPhone‌ 12" launch will be delayed this year due to the ongoing global health crisis and restrictions on travel. Apple last year started selling iPhones in late September, but this year, Apple projects supply will be "available a few weeks later," suggesting a release sometime in October. We're expecting a total of four OLED iPhones in 5.4, 6.1, and...
Read Full Article • 86 comments