With iOS 13 and tvOS 13, Apple users are now able to connect their favorite console controllers to an iPhone or Apple TV. In this guide, we've provided a quick rundown of how to go about pairing the DualShock 4 Wireless Controller and Xbox Wireless Controller to both iOS and tvOS devices. 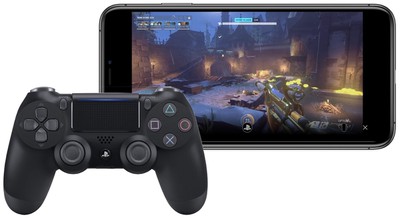 Previously, MFi controllers were the only solution to playing games on ‌iPhone‌, iPad, and ‌Apple TV‌. With the new update, console players don't need to spend extra money on another controller to play iOS and tvOS games. PS4 players also have a reason to look into DualShock 4 pairing since Sony's Remote Play iOS app provides streaming of compatible games to the ‌iPhone‌ or ‌iPad‌, which can now be controlled by a DualShock 4.

How to connect the Xbox Wireless Controller to iPhone or iPad

Sony's Remote Play iOS app controlled via DualShock 4
The steps for pairing controllers with an ‌Apple TV‌ are largely similar to the ones for iOS devices. You can find this information below.


How to connect the DualShock 4 Wireless Controller to Apple TV

How to connect the Xbox Wireless Controller to Apple TV

It should be noted that for the DualShock 4, some controller functions will not be functional while connected to an ‌iPhone‌, ‌iPad‌, or ‌Apple TV‌. These include the touchpad, the central PS button, rumble, motion sensor, and the headphone jack. The light bar will also remain one color and can not be changed.

That hasn't been a big deal for me. I plug it in to the console to charge it anyway.

Aha. I put them on the DualShock 4 Charging Station. The console is hidden behind a wooden frame with a piece of fabric around it – which is what we have to hide all the electronics underneath the TV in the living room – so never really need to connect a controller to the console, plus it's a bit of a hassle in my case.
Score: 2 Votes (Like | Disagree)

Yep, I've gamed a lot on mine. Did you hold down the PS button and the share button at the same time before pairing the controller?
Score: 2 Votes (Like | Disagree)

It is true you can run it off a USB cable, but I'm not sure how many people have a USB cable running to the sofa.

I bought a really long USB cable on Amazon for that exact scenario but I can see that being the exception and not the norm!
Score: 2 Votes (Like | Disagree)

MisterSavage
This works remarkably well and is a huge "game" changer. One of my favorite additions with iOS 13.
Score: 2 Votes (Like | Disagree)

A bit sad the connecting the controller back to the console can't be achieved without connecting a cable between them. But maybe good for Sony and Microsoft since it makes me consider getting more controllers just for iOS/tvOS/macOS play. ? Not so good for the environment... ?

So... before shelling out $50... any noted differences between controllers? I've heard Microsoft controllers have better battery life?

For me what makes the XBox controller a better choice for this is it has replaceable AA batteries, where the PS4 controller has to be recharged over USB. So if the PS4 battery runs down, you are done playing, where with the XBox you can just swap in some new AAs. I used Eneloop rechargeables and it worked out well for me.

This is false.
The PS4 controller can be used to play while charging via charging cable. Environmentally conscious, this is better than buying batteries to use then discard.

How do I switch from an iPad to an Apple TV for example? Do I have to re-pair every time I switch devices?

My controller automatically connects to the last device it was paired to and if I try to switch devices it fails to connect unless I de enter pairing mode.

Yes. For now, you have to unpair from one device and pair to each time you want to use it on with different device.

Imagine in the next generation systems, Sony, Microsoft and even Nintendo had the W1 chip via Apple...then, I’m sure switching from system to system would be a breeze and be linked to your Apple ID.

One can dream right?
Score: 2 Votes (Like | Disagree)
Read All Comments

Friday September 18, 2020 12:21 pm PDT by Juli Clover
Apple in iOS 14 added Picture in Picture to the iPhone, a feature designed to let you watch a video in a small screen on your device while you continue to do other things on the phone. When Picture in Picture was working with YouTube The YouTube app doesn't support Picture in Picture, but up until yesterday there was a functional workaround that allowed videos from YouTube.com to be watched...
Read Full Article • 196 comments

Friday September 18, 2020 12:57 pm PDT by Joe Rossignol
Apple hosted its virtual "Time Flies" event this week, where it introduced four new products, including the Apple Watch Series 6, lower-cost Apple Watch SE, a 10.9-inch iPad Air with an all-screen design, and an updated 10.2-inch iPad with a faster A12 Bionic chip. As expected, there were no new iPhones, which are believed to be coming in October instead. Apple also announced that it will be ...
Read Full Article • 77 comments

Friday September 18, 2020 4:50 am PDT by Hartley Charlton
Epic Games has announced that "Fortnite: Save the World" will no longer be playable on macOS, after Apple terminated Epic Games' developer account. Fortnite has been in violation of the ‌App Store‌ rules since August 13, when it introduced a direct payment option that skirted Apple's in-app purchase system by allowing payments directly to ‌Epic Games‌. Shortly after Epic blatantly...
Read Full Article • 201 comments