How to Use the App Store on Apple TV

The fourth-generation Apple TV has a lot of new features, one of them being the addition of the Apple TV App Store. On the surface, the App Store on Apple TV seems similar to that of the iOS or OS X version. There are, however, some aspects of the tvOS App Store that are are a little different and might need some explaining.

For example, some apps, like Lumino City, are available on iOS and Apple TV, while others such as Beat Sports are only available on Apple TV, and can therefore be a little harder to find. Apple has gradually been adding features such as categories to the Apple TV App Store, so things are definitely still a work in progress. We've got a few tips on how to navigate the App Store, and maybe even discover new apps worth downloading. 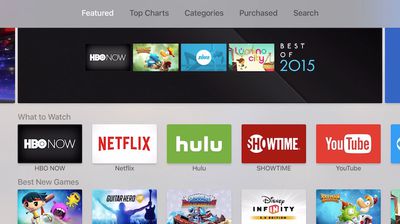 Probably the most frustrating aspect of the Apple TV App Store is finding cool new content. Since the Apple TV's debuted, Apple has added Top Charts and Categories, which have greatly improved our ability to discover content.

Top Charts shows the top 50 – 75 (or so) paid, free, and grossing apps. Currently there is no way to filter the lists by category. However, with more content being added daily, it is likely that Apple will at some point add category filter options so we can search for, say, Top Paid Games or Top Free Entertainment apps.

When you visit the Categories section, you'll be able to select from a few major classifications, like Games, Education, Entertainment, Sports, and more. Within a category, you'll see a list of spotlighted apps, like "What to Play" or "What to Watch," plus a few more lists. The category sections are somewhat limited right now.

One glaring omission from Apple's app discovery mechanic is the "Customers Also Bought" section. Hopefully, Apple will implement this in a future update, when more content becomes available.

Buying Apps on iOS and Downloading on Apple TV

Apple recently added the Apple TV identifier for universal apps to iTunes on iOS, which makes it easier to figure out which iOS apps are compatible with Apple TV. The identifier is not yet available in iTunes on desktop computers, but will likely be added later.

In the Purchased section, you can filter your apps by recently added or updated, or by category.

Currently, there is still no way to view Apple TV-exclusive apps in iTunes.

Just like on iOS, you can set up Apple TV to automatically update apps when new versions are available. To enable automatic updates:

When enabled, apps will automatically update in the background similar to the feature on iOS. To view recently updated apps, visit the Purchased section of the Apple TV App Store and click on "Recently Updated."

The Apple TV App Store includes a dedicated Search pane to allow you to look for apps. Unfortunately, Siri voice search within the store is not currently supported, so you must enter text to search the store. The onscreen search mechanism is cumbersome, with a single line of letter that must be navigated with the Apple TV's remote. Fortunately, the recent tvOS 9.1 update added compatibility with the iOS Remote app, meaning you can now enter text in the Apple TV's search field and elsewhere by typing on your iOS device's keyboard.

When you first enter the Search screen, it shows a list of trending apps you might be interested in, and then as you type, automatic suggestions based on what you've typed so far begin showing up on the screen.

As with iOS, you can customize the arrangement of your apps on the main screen of the Apple TV. To move an app, move the cursor to the app you want to move, and click and hold on the remote trackpad until the app icon starts jiggling. At that point, you can swipe on the trackpad to move the app to its new location on the screen, and the other icons will adjust to make room for it. When you're done, click on the trackpad to exit the rearrange mode.

While you can always exit and an app and head back to the main home screen in order to access a different app, tvOS has an app switcher similar to that found on iOS. Double clicking the home button on the remote (the button with the TV icon on it) will bring up the app switcher, where you can swipe left and right among recently used apps.

Playing Music in the Background While in Another App

You can play music in the background while using another app as long as that app is not playing any audio. Music will continue playing while you are searching for movies in Hulu or Netflix, or if you are watching a slideshow in Photos or 500px. However, as soon as you play content that has audio, the music will stop.

This feature does not work with games, as games usually have their own soundtracks and your music will stop playing as soon as you open one. Even if you turn all audio settings off for the game, your iTunes music will not play.

Now that you know a little bit more about Apple TVs App Store, you might have more success finding the best apps and games for your family from Apple's growing content.

HiRez
The fact that this article even needs to exist is a bad sign.

npmacuser5
All I want for Christmas; Universal App Store, using my Macbook or iPad to select, have the App Store deliver to my Apple TV or TV's and devices for universal Apps. Others are already doing this. Example Amazon, use your web browser, tablet or phone app, search for what you want using a real search machine, add to cart, select devices to deliver App, open up devices the Apps are there. Works for all universal Apps. If an App does not work on a device the device is grayed out. Now compare the way Apple approaches the Apps. Totally Old School and in No way up with the times. The Apple TV is still a hobby hack developed back in the garage. Very incomplete for an Apple product.
Score: 4 Votes (Like | Disagree)

utazdevl
The fact that I can't sit at my computer or on my phone and review and select apps that are then installed on my AppleTV is the biggest indictment I could offer on the AppleTV App store experience. Can't wait until Apple introduces this feature as a "new and innovative" was to use the App Store, despite it being available on virtually every other streaming device that has apps for years.
Score: 2 Votes (Like | Disagree)

I have several iTunes account for different countries (Canada, us and uk). Is is possible to download apps from multiple countries like you can on an iOS device? Eg. iPlayer from Uk, and some us only apps.

Yes, it works the same way as on iPhone
Score: 1 Votes (Like | Disagree)

lsutigerfan1976
I can't find anything on it. I have to come to forums on sites like this just to find out what new apps/games have been released. That should tell you all you need to know.
Score: 1 Votes (Like | Disagree)
Read All Comments