Apple appears to be rolling out a new feature in its App Store on iOS to note when an app available on iOS is universally compatible with the fourth generation Apple TV. As pointed out by iFun.de [Google Translate], the new feature is still in the early phases, as universal compatibility with the Apple TV is currently marked as "SF.UniversalAppleTV" rather than a simple "Apple TV" title as is used for Apple Watch just above. The new identifier is also not yet showing in the App Store when viewed through iTunes on the desktop. 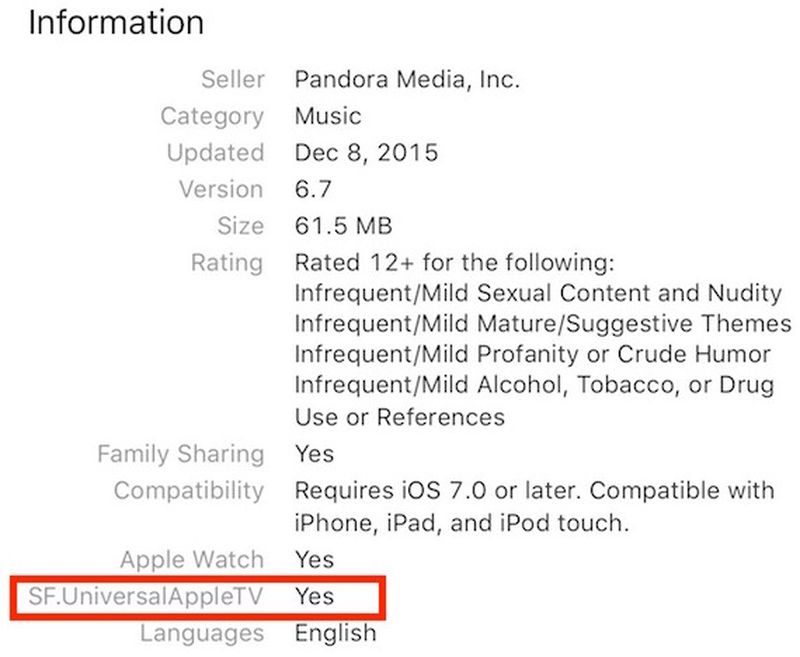 With the growing popularity of the App Store on Apple TV, it makes sense for Apple to want to begin connecting the iOS and tvOS experience as they did when introducing universal iPhone and iPad apps in 2010 and with the addition of the Apple Watch earlier this year. Following its launch in October, Apple began running a new advertising campaign for the Apple TV, which it continues to expand with television shows like Game of Thrones and Veep.

Apple allows developers to build universal apps that support iPhone, iPad, Apple Watch, and Apple TV all from one purchase, so it makes sense to provide users with information on what platforms are included when they prepare to download a new app.

machpost
Now if only there were a way to search for, review and/or buy Apple TV apps in iTunes.
Rating: 2 Votes

So apps are going to get bigger? (MB size).

They'll probably still have that app slimming feature they released an update or so ago. The app will only download what it needs for that device, as it needs it. Someone correct me if I'm wrong.
Rating: 1 Votes

So apps are going to get bigger? (MB size).


Not if developers use "App thinning" correctly.
Rating: 1 Votes

Robert.Walter
Apple is not really thinking here... And making users do needless work checking. The tag in the App Store is helpful but lousy once one buys the app. It is but one way to inform users but is not the best way...

I've written to Apple suggesting that they use the iPhone apps to advertise companion apps to those on the iPhone.

By companion I mean apps available for the iPad, Watch and the TV.

Apple should superimpose a small representative symbol on each corner of the iPhone apps:
- upper right, small square with a plus in it for iPad;
- lower right, small circle, iPhone;
- lower left, small rectangle, TV;
- upper left, reserve, or a small wallet symbol indicating Pay support.

In this way, I can see what is available when I use the app, rather than having to repeatedly check availability status in the App Store.

Additionally, there could just be a "notify when companion apps become available" toggle in the App Store configuration section of the settings app.
Rating: 1 Votes
[ Read All Comments ]