Apple's M1 Ultra Chip: Everything You Need to Know

Apple in March 2022 introduced its most powerful Apple silicon chip to date, the M1 Ultra, which is designed for and used in the Mac Studio. 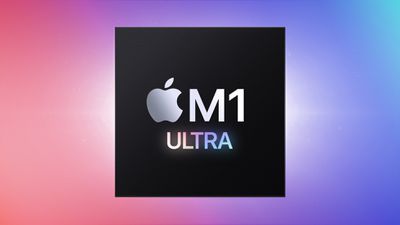 This guide covers everything that you need to know about the ‌M1‌ Ultra.

The ‌M1‌ Ultra is Apple's fourth System on a Chip (SoC) developed for use in Macs, and it puts Apple one step closer to entirely transitioning away from the Intel chips that have been used in Macs since 2006.

Compared to the ‌M1‌, M1 Pro, and M1 Max, the ‌M1‌ Ultra is special because it represents a new feat of engineering from Apple. The ‌M1‌ Ultra is essentially two ‌M1 Max‌ chips that have been connected together through an Apple-developed method, so it offers double the performance of the ‌M1 Max‌.

Traditional Intel-based Macs used multiple chips for the CPU, GPU, I/O, and security, but integrating multiple components onto one chip allows Apple silicon chips to operate faster and more efficiently than Intel chips. The ‌M1‌ Ultra features 114 billion transistors, the most ever in a personal computer chip, and it is Apple's largest Apple silicon chip to date.

The ‌M1‌ Ultra uses "UltraFusion," the name that Apple has given to its packaging architecture. Apple's architecture interconnects the dies of two ‌M1 Max‌ chips to create a single system on a chip that operates just like the ‌M1 Pro‌ or the ‌M1 Max‌.

Typically, scaling performance is done by connecting two chips on a motherboard, but that comes with tradeoffs like increased latency, reduced bandwidth, and more power consumption.

But for the ‌M1‌ Ultra, Apple is using a silicon interposer that is designed to connect the two chips across more than 10,000 signals, offering 2.5TB/s of low-latency inter-processor bandwidth, which Apple says is 4x the bandwidth of the leading multi-chip interconnect technology. At this latency level, the ‌M1‌ Ultra behaves as and is recognized as a single chip, so developers do not have to take any steps to take advantage of the
full capabilities of the ‌M1‌ Ultra.

Apple silicon chips like the ‌M1‌ Ultra use an Arm-based architecture, similar to the A-series chips that have been used in iPads and iPhones for many years.

Intel chips, meanwhile, are built on x86 architecture, which Apple has decided to move away from. Apple's chips are built by Taiwan Semiconductor Manufacturing Company (TSMC), a company that builds all of Apple's A-series and M-series chips.

The ‌M1‌ Ultra has a 20-core CPU that includes 16 high performance cores and four high efficiency cores, which is equivalent to two 10-core ‌M1 Max‌ chips.

There's up to a 64-core GPU and a 32-core Neural Engine, capable of running 22 trillion operations per second.

The ‌M1‌ Ultra is faster and more powerful than any other chip that Apple offers, including the 28-core Xeon chip in the highest-end Mac Pro. Its GPU performance also exceeds the best graphics card that Apple has used to date.

The ‌M1‌ Ultra supports up to 128GB unified memory. It also offers up to 800GB/s memory bandwidth, 2x more than the ‌M1 Max‌.

There's a Media Engine included in the ‌M1‌ Ultra that's designed to accelerate video. The ‌M1‌ Ultra has double the media engine capabilities of the ‌M1 Max‌, with more video encode and decode throughput

It can play back up to 18 streams of 8K ProRes 422 video, double the capabilities of the ‌M1 Max‌.

The ‌M1‌ Ultra has several other built-in technologies.

Macs With an M1 Ultra Chip

The ‌M1‌ Ultra is used exclusively in the high-end Mac Studio, which is also offered with an ‌M1 Max‌ chip.

The ‌M1‌ Ultra has a built-in Secure Enclave that manages Touch ID and a storage controller with AES encryption hardware for SSD performance that's faster and more secure.

Running Apps on the M1 Ultra

With Rosetta 2, apps designed for Intel machines will continue to run on ‌M1‌ Macs with some limited performance compromises. For the most part, apps run similarly on both Intel and Apple silicon because of the performance enhancements added by the ‌M1 Pro‌ and ‌M1 Max‌ chips.

‌M1‌ Ultra Macs can run ‌iPhone‌ and ‌iPad‌ apps as well as Mac apps, so long as app developers make them available to Mac users.

Have questions about the ‌M1‌ Ultra chip, know of a feature we left out, or want to offer feedback on this guide? Send us an email here.

Tuesday March 8, 2022 1:11 pm PST by Juli Clover
The first benchmark for Apple's M1 Ultra chip popped up on Geekbench following today's event, confirming that the doubled-up M1 Max is indeed able to outperform the highest-end Mac Pro as Apple claims. Labeled Mac13,2, the Mac Studio with 20-core M1 Ultra that was benchmarked earned a single-core score of 1793 and a multi-core score of 24055. Comparatively, the highest-end Mac Pro with...
Read Full Article • 304 comments

Tuesday March 8, 2022 12:46 pm PST by Juli Clover
The newly announced M1 Ultra is now Apple's fastest Apple silicon chip, unseating the M1 Max as the top-of-the-line option. With the power of the updated chip, the new Mac Studio is able to outperform not only the high-end prior-generation 27-inch iMac, but also the top-of-the-line 28-core Mac Pro. The M1 Ultra chip offers a 20-core CPU with 16 high-performance cores and 4 high-efficiency...
Read Full Article • 158 comments