The first benchmark for Apple's M1 Ultra chip popped up on Geekbench following today's event, confirming that the doubled-up M1 Max is indeed able to outperform the highest-end Mac Pro as Apple claims. 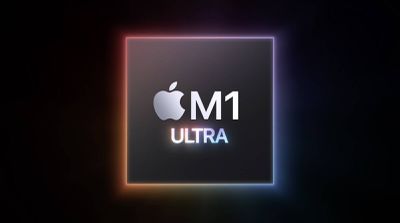 Comparatively, the highest-end ‌Mac Pro‌ with 28-core Intel Xeon W chip has a single-core score of 1152 and a multi-core score of 19951, so the ‌M1 Ultra‌ is 21 percent faster in this particular benchmark comparison when it comes to multi-core performance. As for single-core performance, the ‌M1 Ultra‌ is 56 percent faster than the 28-core ‌Mac Pro‌.

Apple has claimed that the ‌M1 Ultra‌ is up to 60 percent faster than the 28-core ‌Mac Pro‌ when it comes to CPU performance, so Apple may be referencing single-core differences in the metrics that it shared during today's event. This is just one benchmark, so we could see the ‌M1 Ultra‌ performing better in additional benchmarks following the March 18 release of the ‌Mac Studio‌.

If you need a scientific or engineering workstation, or are working with video editing or CGI or the like, then, no, the M1 max wasn’t “enough,” because you’ll take every ounce of power you can get.
Score: 56 Votes (Like | Disagree)

Makosuke
Given the performance of the M1 Max, this result is right around where you'd expect it to be, so seems completely believable. The only interesting bit is that performance per-core scales linearly. Which is great, but not surprising given the incredible thermal profile of the chip.

With the caveat that, yes, Geekbench is a synthetic benchmark, this thing appears to be significantly outperforming the top-of-line, just-launched 12th-gen i9 desktop parts. Given that the i9-12900K has a TDP of 125W and turbo power rating of 240W, and this thing fits in a compact desktop, I would be feeling more than a little nervous if I were Intel.

The M1 Ultra is even competitive with all but the most extreme big-iron many-core Xeon and Threadripper CPUs, and the entire computer costs less than many of those chips (its also probably smaller than the CPU cooler on some of them)... but it doesn't have 1TB+ of ECC RAM or some of the other features big-iron desktops have.

Which is why I'd be even more nervous, if I were Intel, that Apple hasn't put their own silicon in the Mac Pro yet. That's a pretty strong indication that Apple has something even-higher-end in the pipeline.
Score: 31 Votes (Like | Disagree)

So it's NOT faster than the AMD Ryzen Threadripper 3990X ('https://browser.geekbench.com/processors/amd-ryzen-threadripper-3990x').
It would then be the 2nd best consumer processor in the world.
The entire computer is less expensive than the Threadripper though.

But I don't care, wow... what are people going to do with such a monster of performance... ?
I remember a few people in the cinema industry left Macs because FCPX lacked features when it was released. Are they going to come back ?! Will game developers finally consider the Mac? (the best Mac Studio is 2X as powerful as the PS5)

I am going to chime in here.

Apps I use max out the GPU. The more I add into the 3D model the more RAM it uses plus FPS drop [geometry and textures]. This is gaming engine software.
My 3080ti is already maxed in RAM on my PC, and I am totally over the heat and noise from it.

It simply is insane what apps can use these days in terms of resources and power, and personally I never want my computer to restrict my work in any way.
We get paid a lot of money to be able to deliver good quality design work, quickly. This machine is still actually less than the app subscriptions used on it, believe it or not.

I actually believe the studio is well priced for what it delivers [or at least what I expect it to].
Score: 30 Votes (Like | Disagree)

cloudphrenia
slap four M1MAXs together and call it the Ultra Instinct
Score: 25 Votes (Like | Disagree)

ChromeCloud
That would make it roughly 40% faster than the fastest Intel Alder Lake desktop CPU (i9-12900K), which scores about 17000.

Tuesday March 8, 2022 11:31 am PST by Juli Clover
With the launch of the new Mac Studio that replaces the higher-end 27-inch Intel iMac, Apple has just two Intel Macs left in its lineup - the Mac Pro and the Mac mini. Though the Mac Studio appears to be something of a Mac mini and Mac Pro hybrid, Apple has not discontinued the high-end Intel Mac mini and it remains in the lineup. This suggests a new version of the high-end Mac mini is...
Read Full Article • 56 comments

Tuesday March 8, 2022 1:46 pm PST by Juli Clover
The newly announced M1 Ultra is now Apple's fastest Apple silicon chip, unseating the M1 Max as the top-of-the-line option. With the power of the updated chip, the new Mac Studio is able to outperform not only the high-end prior-generation 27-inch iMac, but also the top-of-the-line 28-core Mac Pro. The M1 Ultra chip offers a 20-core CPU with 16 high-performance cores and 4 high-efficiency...
Read Full Article • 159 comments

Monday November 28, 2022 10:42 am PST by Juli Clover
Apple has cut back on its Twitter advertising, according to Twitter CEO Elon Musk. In a tweet, Musk said that Apple has "mostly stopped" its Twitter ads, asking if Apple hates "free speech." Musk went on to publish a poll asking if Apple should "publish all censorship actions" taken that impact customers and he began retweeting content from companies that Apple has had moderation discussions ...
Read Full Article • 1453 comments