The newly announced M1 Ultra is now Apple's fastest Apple silicon chip, unseating the M1 Max as the top-of-the-line option. With the power of the updated chip, the new Mac Studio is able to outperform not only the high-end prior-generation 27-inch iMac, but also the top-of-the-line 28-core Mac Pro. 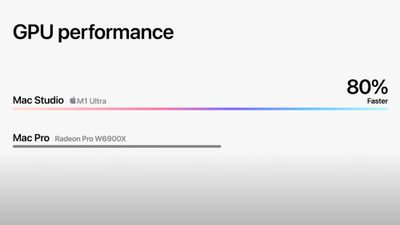 When it comes to CPU performance, the ‌M1 Ultra‌ is 3.8x faster than the highest-end Intel Core i9 ‌iMac‌ (which has now been discontinued), and 60 percent faster than the 28-core ‌Mac Pro‌ with Intel Xeon W processor.

The ‌M1 Ultra‌ supports 18 streams of 8K ProRes 422 video, which Apple says no other computer in the world is able to do.

All of Apple's silicon chips offer incredible power efficiency, and the ‌M1 Ultra‌ is no exception. According to Apple, the ‌M1 Ultra‌ is able to offer 90 percent higher performance than the fastest 16-core PC CPU within the same power envelope, and it can deliver the PC chip's peak performance using 100W less power.

The ‌Mac Studio‌ with ‌M1 Ultra‌ chip is priced starting at $4,000, and it is available for order as of today.

I never believe any manufacturer's claim of performance until I see outside entities do more rigorous testing. Manufactures always cherry pick benchmarks to make products look good; and why wouldn't they. If the performance claims turn out to be real then good God just think what they have in mind for the Mac Pro replacement.

macsplusmacs
But I need 19 8K streams.*

_Spinn_
The M1 Ultra is a beast! I’m very excited to see what Apple Silicon gets put in the Mac Pro when it is transitioned.
Score: 12 Votes (Like | Disagree)

avkills
I would not believe any of those claims until some real world testing by labs other than Apple has been released.
Score: 12 Votes (Like | Disagree)

Freida
We already have the data for M1 Max. You can just double those and you have the baseline.
So you could be skeptical all you want but the verdict is already out. Just look for it ;)

I never believe any manufacturer's claim of performance until I see outside entities do more rigorous testing. Manufactures always cherry pick benchmarks to make products look good; and why wouldn't they. If the performance claims turn out to be real then good God just think what they have in mind for the Mac Pro replacement.

Wednesday March 9, 2022 3:53 pm PST by Juli Clover
Prior to yesterday's spring event, rumors suggested that Apple might unveil a new Mac mini, but instead we got the all-new Mac Studio, which is something of a mix between a Mac mini and a Mac Pro. Apple isn't phasing out the Mac mini with the debut of the Mac Studio, and a new version is still in the works. The Mac Studio uses the M1 Max and new M1 Ultra chips, but for the next Mac mini, 9to5...
Read Full Article • 285 comments