Apple today released iOS 15.1, the first major update to the iOS 15 operating system that was released in September. iOS 15.1 introduces new features that were delayed from iOS 15 plus it adds camera improvements for iPhone 13 Pro users. 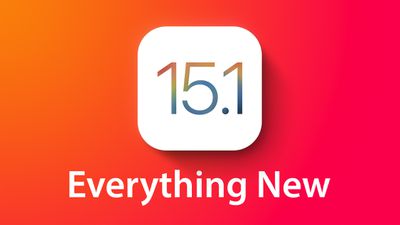 This guide highlights everything that's been added in the iOS 15.1 update.

Integrated into the FaceTime app, SharePlay is a feature that's designed to allow people to do more together virtually using ‌FaceTime‌. There are built-in options for listening to music with others with playlist sharing and watching TV and movies with syncing.

There's also a SharePlay screensharing component for sharing what's on your iPhone, iPad, or Mac with someone else, a feature great for group planning or assisting someone with device troubleshooting.

SharePlay was meant to be introduced as part of the initial iOS 15 update, but Apple had to delay it because it was buggy and not ready for release.

When the ‌iPhone 13 Pro‌ models launched, Apple promised that a high-quality ProRes video option would be coming in an update, and it has arrived in iOS 15.1.

You can enable ProRes by going to the Camera section of the Settings app and tapping on "Formats." From there, toggle on "Apple ProRes."

ProRes video capture is limited to 30fps at 1080p on devices with only 128GB of storage, but higher capacity devices can record in 4K. Apple says that a one-minute 10-bit HDR ProRes video takes up 1.7GB of space when recorded in HD mode, or 6GB in 4K mode.

For macro shots, the ‌iPhone 13 Pro‌ models switch over to the Ultra Wide lens when the ‌iPhone‌'s camera gets close to an object, which some people are not a fan of because it can be difficult to get a shot with the camera lenses swapping back and forth.

The iOS 15.1 update adds a new toggle to turn off Auto Macro, and when disabled, the Camera app will not automatically switch over to the Ultra Wide camera for macro photos and videos.

Auto Macro can be turned off in the Camera section of the Settings app by scrolling down and toggling off the "Auto Macro" option.

Lossless Audio and Dolby Atmos With Spatial Audio for HomePod

Paired with the HomePod 15.1 software, iOS 15.1 brings Lossless quality and Dolby Atmos Spatial Audio to the ‌HomePod‌ and the HomePod mini.

Vaccine Cards in the Wallet App

‌iPhone‌ users who have added their COVID-19 vaccination records to the Health app on the ‌iPhone‌ can now use those records to generate a vaccination card in the Wallet app. The Apple Wallet vaccination card can be shown to businesses, venues, restaurants, and more that are requiring vaccines for entry.

Any vaccination record available through the SMART Health Cards specification can be added to the Health app and transferred to Wallet.

California, Louisiana, New York, Virginia, Hawaii, and some Maryland counties support Smart Health Cards, as do Walmart, Sam's Club, and CVS Health. So those in the specific supported states should be able to look up their information in state databases, but those who were vaccinated through companies like Walmart and CVS can also add their information to the Health and Wallet apps because it's the same system.

There are new automations triggers that can be created based on HomeKit-enabled sensors that detect humidity, air quality, or light level.

Shortcuts includes new actions for overlaying text on images or GIFs, and there are new Siri games.

For iPhone 12 models, there are updated battery algorithms that will offer better estimates of battery capacity over time.

On the ‌iPad‌, the update adds the above listed features and support for Live Text in the Camera app. With Live Text, the Camera can detect text, phone numbers, addresses, and more, with the feature available on iPads that have an A12 Bionic chip or later. Live Text was already available on the ‌iPhone‌.

The update includes several bug fixes for issues with Photos storage, the Weather app, the Wallet app, Wi-Fi, and more.

- ‌Photos‌ app may incorrectly report storage is full when importing photos and videos
- Weather app may not show current temperature for My Location, and may display colors of animated backgrounds incorrectly
- Audio playing from an app may pause when locking the screen
- Wallet may unexpectedly quit when using VoiceOver with multiple passes
- Available Wi-Fi networks may not be detected

Know of an iOS 15.1 feature we left out or want to offer feedback on this guide? Send us an email here.

Turnpike
I keep watching for the battery % up in the top corner of the home screen now that the notch is smaller. I really hope it's coming in one of the next few updates.....
Score: 10 Votes (Like | Disagree)

southerndoc
How do you add vaccination status to the wallet app? I don't see an option (only apply for an Apple Card, add debit/credit card, and add a transit card).
Score: 6 Votes (Like | Disagree)

BWhaler
Nice update. Hope it stomps out a ton of bugs.

We need to start talking about how settings and options have gotten completely out of control. It’s MS in the 90’s territory.
Score: 6 Votes (Like | Disagree)

As far as Vaccine Cards in the Wallet App goes, it is hardly a feature when it is available in only a few states. The vast majority of people won’t have this.

Not necessarily. While only a handful of states use SMART health cards for their registry, you can still add your vaccinations to your wallet app as long as your doctor’s office or pharmacy uses them. I don’t live in a participating state that uses SMART health cards but since my doctor’s office uses Epic MyChart for EHR, I was able to add my vaccination records to my Wallet app.
Score: 6 Votes (Like | Disagree)

w5jck
As far as Vaccine Cards in the Wallet App goes, it is hardly a feature when it is available in only a few states. The vast majority of people won’t have this.
Score: 5 Votes (Like | Disagree)

I suspect it’s easier (especially with recovery mode and whatnot) to just reimage the whole firmware when doing it via USB instead of trying to support delta updates. Apple also seems to prefer pushing updates directly to phones instead of requiring tethering to update (look at how betas are delivered these days, vs back in iOS 8 or 9).

They push it directly to phones because that’s what every average iPhone user is gonna do. You’d be surprised but not a lot of people plug their phone into their computer. Better yet a lot of people don’t even use a laptop or desktop. For someone like me, I will ALWAYS update through a cord/computer. Always.
Score: 5 Votes (Like | Disagree)
Read All Comments