Apple introduced updates to many of the built-in iOS apps in iOS 13, and Maps is no exception. The updated version of Maps has a long list of new features that are designed to make the Apple Maps app better able to compete with mapping apps from other companies.

There's a new Look Around street view level feature, a Collections feature for aggregating lists of your favorite places, a Favorites option for getting to your most frequently traveled places quickly, and some other smaller updates that are worth knowing about.

Subscribe to the MacRumors YouTube channel for more videos.
In this guide, we've highlighted all of the new features that are in the ‌Apple Maps‌ app in iOS 13.

The work done in iOS 12 is continued in iOS 13 with Apple expanding the new Maps app to the entire United States as of January 2020. Apple now plans to bring the updated Maps app to Europe. 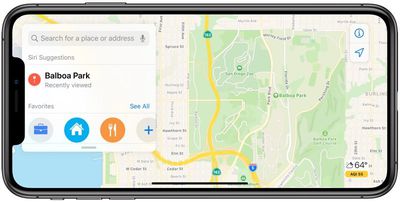 Apple on stage when introducing iOS 13 mentioned these map updates and promised improved detailing for roads, beaches, parks, buildings, and more. Maps in iOS 12 overall looks similar to iOS 13 in states where new Maps have already rolled out, but there could be more detail coming in the future and there are some small changes worth pointing out.

When viewing the main Maps interface, the app now displays road hazards and traffic conditions so you can see the route ahead at a glance. Previously, this information was available, but only when turn-by-turn directions were activated.

In iOS 13, traffic information is visible on the main map too.

iOS 13 adds a Junction View option that's meant to help drivers avoid wrong turns and directional misses by lining them up in the correct lane before a turn or an elevated road.

Siri gives more natural directions in iOS 13. Instead of saying something like "in 1,000 feet turn left," ‌Siri‌ might instead choose to say "turn left at the next traffic light," which is an easier instruction to follow since there's no distance estimation involved.

When you're navigating to something like a concert at a large venue, ‌Apple Maps‌ now offers up improvements that are better suited towards getting you to your end-point destination.

Real-time information like outages, cancellations, and other changes are also listed in the ‌Apple Maps‌ app.

There's a new option to share your estimated time of arrival with friends, family, and coworkers. Your ETA will update dynamically, changing even when there's a significant traffic delay. This feature was removed from iOS 13 during the later betas, but could be re-added in the future.

Place Cards for businesses have been updated to be more helpful and easier to use. You'll see information like times of Today at Apple sessions when looking up an Apple Store, for example, or movie times when looking up a movie theater.

Look Around is a new ‌Apple Maps‌ feature that's designed to be Apple's equivalent of Google Street View. Look Around offers up a street-level view of what's around you or a location you search for in the Maps app.

You can use Look Around in the main ‌Apple Maps‌ view whenever there's a pair of binoculars visible. Tapping on the binoculars icon delves into a close-up street level view of the location in a little card, which you can tap again to get to a full screen Look Around view.

When in Look Around mode, tapping on the display lets you move through the Look Around area, and tapping a spot far off in the distance does a neat zoom in maneuver that's fun to watch.

In Look Around, all notable points of interest, like restaurants, businesses, parks, and more, are highlighted with identifying icons and place names so you can tell what's what.

Look Around is limited to areas where a car can go because it's using data captured from a 360-degree camera on a vehicle. That means you can't zoom into areas like parks or beaches, for example, but you can see what's visible from the street.

At launch, Look Around was limited to parts of California, Nevada, and Hawaii, but it has since expanded to Los Angeles, Houston, New York City, Boston, Philadelphia, and Washington, D.C. Apple plans to continue the expansion in 2019 and 2020.

Collection lists can be shared, so you can make up lists of places for friends and family visiting you in your city and then share it with them, for example.

Favorites is a new Maps feature that lets you search for specific places and then add them to a list. Favorites are meant for places that you visit frequently, and Home and Work are already added by default.

You can add any place you go to often to the Favorites list, such as a favorite restaurant or coffee shop, or a friend's house. Tapping on one of your Favorites brings up directions to that spot right away, so think of it like a speed dial option for Maps.

Apple introduced a redesigned customer feedback interface in iOS 13, which is designed to make it easier for ‌Apple Maps‌ users to submit corrections for things like incorrect addresses, business locations, or operating hours.

All of the new features introduced in the Maps app in iOS 13, such as Favorites, Collections, and Junction View have been added to CarPlay. The Maps app in ‌CarPlay‌ also provides updated route planning, search, and navigation.

Have questions about Maps, know of an iOS 13 Maps feature we left out, or want to offer feedback on this guide? Send us an email here.

ipedro
Look Around fills in the last piece that I occasionally still used Google Maps for. Apple not only matched Google but beats it in my opinion. The ease of use of navigating via Flyover and now Look Around is far superior to Street View.

It was all worth the growing pains. Apple owns a critical piece of the data and experience used throughout the entire Apple ecosystem.

Remaining at the mercy of their main competitor would have been a massive strategic mistake. Steve Jobs made the right call moving to an in house Maps app.
Score: 18 Votes (Like | Disagree)

jarman92
Every year I SO want to use Apple Maps, but every year I'm disappointed. Currently running iOS 13 beta in Barcelona, and Apple doesn't have one iota of transit info. Haven't even tried POIs but I imagine they're equally terrible :(
Score: 13 Votes (Like | Disagree)

Jeremy3292
Unfortunately, none of these features address the main problem which is lack of an extensive database of POIs like Google has. Anyone remember iOS SIX? 7 cycles later and still no dice. Carry on
Score: 12 Votes (Like | Disagree)

utwarreng
How about the basic ability to plan a trip that stops at multiple destinations? Google Maps has for years allowed me to say "let's go to A, then to B, then to C, then back home." Sometimes when I have a number of different destinations, I just want to put in a list of addresses and have Apple Maps spit back, "this is the most efficient route for you to drive to all of your destinations," or at least let me manually add multiple destinations.
Score: 10 Votes (Like | Disagree)

calstanford
Outside the US (Heck even outside of California really) Apple Maps is a barren wasteland of nothingness and shouldn't even realistically be offered.
Apple puts zero effort on outside-US.
Score: 7 Votes (Like | Disagree)

Unfortunately, none of these features address the main problem which is lack of an extensive database of POIs like Google has. Anyone remember iOS SIX? 7 cycles later and still no dice. Carry on

I guess it depends on where you are. Points of interest in Toronto are very thoroughly populated. The new Maps where Apple owns the data, fixes the problem with relying on a third party to make changes to the maps, including correcting errors and adding points of interest. Knowing the work they did in the backend, it’s clear that we’re about to see a massive ramp up of POI and map accuracy after iOS 13 is released to the public.
Score: 6 Votes (Like | Disagree)
Read All Comments