Apple began testing an expansion of the new Maps app to the Southeast and Central United States in late December, which were the final two regions to get the Maps app, but the full rollout was not completed until today. 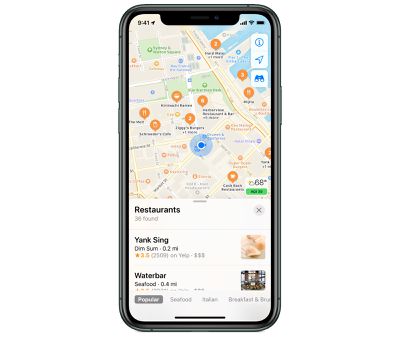 In an article announcing the completed launch of the new Maps app, Apple's vice president of Internet Software and Services Eddy Cue said that Apple is "deeply invested" in creating the "best and most private" maps app in the world.

"We set out to create the best and most private maps app on the planet that is reflective of how people explore the world today. It is an effort we are deeply invested in and required that we rebuild the map from the ground up to reimagine how Maps enhances people's lives -- from navigating to work or school or planning an important vacation -- all with privacy at its core. The completion of the new map in the United States and delivering new features like Look Around and Collections are important steps in bringing that vision to life. We look forward to bringing this new map to the rest of the world starting with Europe later this year."

Along with announcing the new design features in the Maps app, Apple highlighted Maps features added in iOS 13 such as the street-level Look Around view, which is available in New York City, the San Francisco Bay Area, Los Angeles, Las Vegas, Houston and Oahu, plus Collections, for creating lists of favorite places.

Favorites, another new iOS 13 feature, lets users save directions for places that are frequently visited, while other major Maps features include Share ETA, flight status info, indoor maps for malls and airports, Siri natural language guidance for directions that are easier to follow, and real-time transit information in cities that include San Francisco, New York, and Los Angeles.

Apple also shared details on the privacy features built into the Maps app. Maps is not connected to the Apple ID, personalized features are all done on-device, data collected by Maps is associated with random identifiers that continually reset, and Apple servers "fuzz" location searches by converting precise locations where searches originated to a less-exact location after 24 hours.

With the rollout of the new Maps completed in the United States, Apple plans to also bring the redesign to Europe "in the coming months."

WaxedJacket
I've switched to strictly using Apple Maps for directions but they still have a horrible algorithm for predicting what you're looking for. For example, I'll look for a specific local restaurant called Jake's BBQ and it will give me Jake's BBQ 1200 miles away instead of the one here that's technically called Jake's Backyard BBQ.

I do the same test in Google maps and it comes up properly. I wish I could use Googles search feature with Apples directions/turn by turn.
Score: 16 Votes (Like | Disagree)

Futurix
Apple Maps are laughably bad in my part of Germany - my entire village is considered a forest. No buildings, no fields, only roads in a forest...
Score: 15 Votes (Like | Disagree)

iObama
I've been able to completely switch away from Google Maps and Waze over the past year. (Granted, I live in the Bay Area/Northern California, so I was lucky with the rollout.)
Score: 11 Votes (Like | Disagree)

I had no problem with the previous version.