Alongside the launch of the Apple Watch Series 6, Apple Watch SE, and the new watchOS 7 software update, Apple introduced a Family Setup feature that's designed to allow parents to set up Apple Watches for their children, letting an Apple Watch be used without an iPhone. 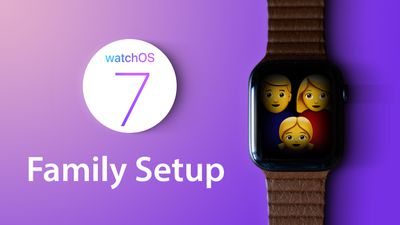 While Family Setup is primarily aimed at families with children, it's also useful for setting up an Apple Watch for an older adult or anyone else who doesn't have an ‌iPhone‌ available but wants to take advantage of the fitness and health benefits provided by Apple's wrist-worn wearable.

Family Setup is designed to work with a GPS and Cellular enabled Apple Watch Series 4 or later that's running watchOS 7. It is not compatible with earlier Apple Watch models nor with those that do not have a cellular connection.

The main person setting up Family Setup must have an ‌iPhone‌ 6s or later with iOS 14 installed, and all participants will need an Apple ID and will need to be part of a Family Sharing setup, though these last two requirements can be worked out during the setup process.

Setting Up Family Setup on iPhone

Prior to launching the Family Setup process, it's best to make sure that each child or older adult that will participate has an ‌Apple ID‌. We have how tos for creating an ‌Apple ID‌ on iPhone or iPad or on a Mac, as well as a tutorial on using Family Sharing. Two-factor authentication is also a requirement for each ‌Apple ID‌, so make sure that's turned on as well.

If you don't have an ‌Apple ID‌ set up for each member in the family and Family Sharing isn't enabled these can be activated during Family Setup, but it will be a faster, smoother process if the prerequisites are completed ahead of time.

There are a lot of steps necessary to get Family Setup ready to use because Apple offers parents quite a lot of control over what's enabled and how the Apple Watch functions.

Parents can choose to add Medical ID information, control ‌Siri‌ access, set an activity goal for daily movement, provide an allowance on Apple Watch, monitor their kids' location, control who kids can contact, and more, so plan to spend a good half hour to hour walking through all of the steps.

Apple added some unique Family Setup features that can be activated for kids, and we've outlined some of the most notable options you'll want to be aware of below. For the most part, all Apple Watch functionality is available and Apple Watches for kids work like Apple Watches for adults, but parents have more management options.

For a more in-depth tutorial, check out our how tos for setting up Screen Time on an iPhone or on a Mac.

Parents can set up shared Contacts that will provide a set list of people that children can communicate with, which originate from the parent's own Contacts list.

Screen Time also includes a Communications Limits feature that lets parents dictate who a child can contact from their Contacts list and the times that those contacts can be interacted with on Apple Watch. This too is controlled through the Screen Time settings, with more info available here.

Schooltime is an Apple Watch-specific feature that was introduced with Family Setup. It lets parents lock down the Apple Watch during school hours with the aim of encouraging children to focus on their schoolwork.

Schooltime is different from Screen Time in that it can be deactivated by the child when the child turns the Digital Crown on the Apple Watch, which is useful for emergencies, but parents are notified in that situation.

Initiating Family Setup allows for Schooltime to be activated during the setup process, but parents can access and edit Schooltime features in the Apple Watch app on ‌iPhone‌.

Schooltime can be set for specific times during school, and breaks during recess and lunchtime can be scheduled, which will let kids access their Apple Watches when school is not in session. When enabled, Schooltime blocks all apps and complications, as well as activating Do Not Disturb. Emergency calls and Notifications are able to break through the Do Not Disturb limitations, however.

Parents can give their children "allowances" on the Apple Watch using the ‌Apple Pay‌ Cash feature, and kids can then use those funds to make ‌Apple Pay‌ purchases in stores that accept ‌Apple Pay‌ payments.

Apple Cash is sent through the Messages app on ‌iPhone‌, and parents can send cash by typing in their kids' ‌Apple ID‌ email address and then using the built-in ‌Apple Pay‌ Messages feature to make a payment. Money sent to kids is stored in Apple Cash and can be accessed in the Apple Cash card in the Wallet app, where it can be used to make payments in stores.

Money given to kids is limited to the amount provided, and kids cannot make charges on linked credit cards or in any other way without parental permission. Kids can, however, send their available ‌Apple Pay‌ Cash to others, which is something to be aware of.

Purchases that kids make are displayed to parents, and parents can see what kids have bought and how their money has been used through the Wallet app on ‌iPhone‌.

For younger children (age 13 and under), the Activity app on the Apple Watch will show move minutes rather than a calorie-based activity goal, while older kids will still see the standard calories burned metric. Activity works the same as it does for any other Apple Watch, and kids (or older adults) are able to meet Move, Exercise, and Stand goals that are initially set up by the parent.

Outdoor Walk, Outdoor Run, and Outdoor Cycle exercises have been updated with tuning for children, and coaching notifications are tailored to kids' reading levels and enhanced with emoji.

Kids can download apps and games for the Apple Watch from the Apple Watch App Store. Parents will need to approve purchases before apps can be downloaded, including those that cost money. Kids will get a prompt to "Ask" their parents for permission to download an app, which can be approved or denied. "Ask to Buy" can be turned off using Family Sharing settings in the Settings app.

Here are some of the other things that kids can do with an LTE Apple Watch that uses Family Setup.

Parents can manage Family Setup Apple Watches through the Apple Watch app on the ‌iPhone‌. Just open it up, tap on "All Watches" at the top, and then tap on the child's Apple Watch to get to the settings options and controls.

To initiate Family Setup and add a family member's watch to the ‌iPhone‌, the watch in question must be a Series 3 or later and it must have LTE connectivity. The LTE connection is required because GPS only Apple Watches without LTE rely on the ‌iPhone‌ for a connection, and with a standalone Apple Watch, there's no ‌iPhone‌ to connect to.

LTE Apple Watches can operate independently without any ‌iPhone‌, enabling the Family Setup feature. That said, you can set up a cellular Apple Watch with Family Setup and then decline to enable cellular connectivity when prompted, and it will still work when WiFi is available.

Be aware, though, that the Apple Watch will only work with the one known WiFi network used to set it up and it won't otherwise be able to connect for communication and connectivity purposes.

Many of the Family Setup features are aimed at parents with children, but there are also settings for people who want to manage Apple Watches for older adults that do not have an ‌iPhone‌.

Apple Watch Series 6 models that are set up with Family Setup are not able to access the Blood Oxygen app for blood oxygen measurements, a restriction that applies regardless of the Apple Watch owner's age.

Elderly relatives who have an Apple Watch Series 6 may want the Blood Oxygen app, so this is a limitation worth keeping in mind when deciding whether to use the Family Setup feature.

According to Apple, a watch controlled through Family Setup should last for approximately 14 hours before needing to be recharged. Apple bases that on the following estimated activities:

Battery life will, of course, vary based on usage and by each device. The battery life estimates take into account LTE connectivity and operation over a cellular connection.

Have questions about Family Setup on Apple Watch or want to offer feedback on this guide? Send us an email here.

Thursday March 4, 2021 4:26 am PST by Tim Hardwick
Apple today added a new "Apple for Kids" portal to its support website, offering parents and guardians a one-stop hub for getting their children set up on Apple's devices, services, and platforms, and managing their usage. The section includes quick links at the top for managing your family group and resolving common issues, such as what to do if your child forgot their passcode, or if they...
Read Full Article • 12 comments

Thursday September 24, 2020 6:20 am PDT by Tim Hardwick
In watchOS 7, Family Setup is a new feature that allows kids, elderly relatives, and others to take advantage of many of the capabilities of Apple Watch without the need for their own paired iPhone. Family Setup offers helpful tools for parents and kids, with Schooltime and Downtime features that offer controls over when and what kids can do with their Apple Watch. For older adults, it...
Read Full Article • 51 comments