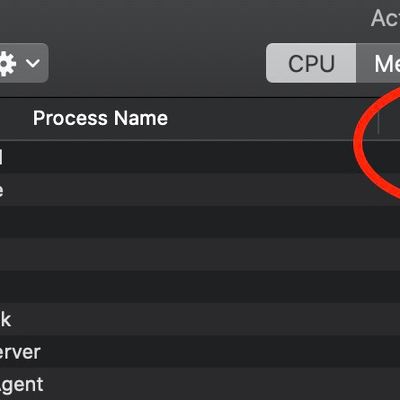 Accountsd: How to Fix High CPU Usage on Mac

Thursday October 1, 2020 9:32 am PDT by Joe Rossignol
Following the release of macOS Catalina version 10.15.7, an increasing number of users have experienced an issue with a system process named "accountsd" showing very high CPU usage in Activity Monitor, causing their Mac to slow down. One user in the Apple Support Communities shared a screenshot of "accountsd" with CPU usage above 400%, rendering their 2018 MacBook Pro "useless." While...
Read Full Article • 134 comments

Wednesday September 30, 2020 10:51 am PDT by Juli Clover
Apple with the Apple Watch Series 6 introduced a new feature for monitoring blood oxygen level, using the LEDs at the back of the Apple Watch to determine the amount of oxygen in the blood. A low blood oxygen level can be indicative of a serious health issue that needs immediate attention. Taking a blood oxygen reading is rather straightforward, but there are automatic measurement settings...
Read Full Article • 49 comments

Apple Fitness+: Everything You Need to Know About Apple's Workout Service

Monday January 4, 2021 9:51 am PST by Juli Clover
Apple alongside the Apple Watch Series 6 unveiled Apple Fitness+, a new service that's designed to help Apple Watch owners keep fit through a series of guided workouts that are available across multiple workout categories. Our Apple Fitness+ guide covers everything that we know about the Fitness+ service, which launched on December 14. Apple Fitness+ Explained Apple Fitness+ is an Apple...
Read Full Article • 112 comments

Widgetsmith Guide: How To, Tutorial, and Ideas

Wednesday September 23, 2020 6:50 pm PDT by Hartley Charlton
Although other methods are available for making the most out of iOS 14's widgets feature, Widgetsmith is among the most popular apps to make custom widgets. The app offers a large number of different widgets with numerous options for customization, helping you to fine-tune the appearance of your home screen. Currently, the app offers these customizable widgets for:Time Date Photos Photos...
Read Full Article

Apple One: What You Need to Know

Friday October 30, 2020 6:10 pm PDT by Juli Clover
Apple in September announced Apple One, a new services bundle that allows Apple device customers to purchase several services together in one package instead of separately, saving money for those who use multiple Apple service products. Apple One launched on Friday, October 30th. Our dedicated Apple One guide covers everything that you need to know about the Apple One bundles. Bundle...
Read Full Article • 201 comments

Wednesday September 23, 2020 10:53 am PDT by Hartley Charlton
In September 2020, Apple updated its popular Apple Watch lineup, introducing an entirely new model of Apple Watch: Apple Watch SE. This new model offers many of the Apple Watch features that have made the device so popular over the years, but at a much more competitive price starting at $279. As an even lower-cost option, Apple continues to sell the Apple Watch Series 3, which first arrived in...
Read Full Article • 54 comments

AppleCare Guide: Is it Worth Paying For?

Monday September 21, 2020 2:00 pm PDT by Hartley Charlton
Most Apple products come with a one-year limited warranty that covers hardware failures and manufacturing defects, and up to 90 days of complimentary technical support. To extend your coverage further, Apple offers AppleCare+ or the AppleCare Protection Plan. With added initial cost, deductibles, and varying prices across the Apple product lineup, is AppleCare+ worth it? Customers have...
Read Full Article

Friday September 18, 2020 4:21 pm PDT by Juli Clover
Over the course of the iOS 14 beta test, we here at MacRumors have been putting together in-depth feature guides, tutorial videos, and how tos on the new features in the iOS 14 and iPadOS 14 updates. Many of our MacRumors readers have likely been running the betas for a couple of months now, but those who are new to the update will want to check out all of the content we have available...
Read Full Article • 102 comments

Wednesday September 30, 2020 1:26 pm PDT by Tim Hardwick
With the release of watchOS 7, Apple has added several new features to compatible Apple Watch models, such as new watch faces and sleep tracking, but it also drops support for the Force Touch gesture that some users may have come to think of as a second nature interaction on their wrist. Subscribe to the MacRumors YouTube channel for more videos. When users firmly pressed their Apple Watch...
Read Full Article • 190 comments

What to Expect at the Apple Event: New Apple Watch Series 6, iPad Air, No iPhone 12

Monday September 14, 2020 7:31 pm PDT by Juli Clover
Last Minute Updates Some last minute leaks have come in ahead of Tuesday's event, confirming which devices we can expect to see Apple unveil, and which features those devices might offer. AirPods and iOS 14 Apple introduced a new version of the AirPods Pro firmware that supports spatial audio for the first time. Spatial audio is an ‌iOS 14‌ feature that enables a stereo surround-style...
Read Full Article • 110 comments

Saturday September 5, 2020 10:01 am PDT by Juli Clover
All of the iPhones in Apple's iPhone 12 lineup will have Qualcomm modems that support 5G, but potential buyers need to know that not all 5G networks are equal. There's the super fast mmWave (millimeter wave) 5G and the slower but more widespread Sub-6GHz 5G. There have been mixed rumors about which ‌iPhone 12‌ models will support which 5G spectrums, but it appears that the fastest 5G...
Read Full Article • 204 comments

Tuesday September 1, 2020 4:50 pm PDT by Tim Hardwick
Have you received an unexpected notification on your Apple device saying that your Apple ID and phone number are now being used for iMessage and FaceTime on a new Mac, iPhone or iPad? If the answer is yes, there's no need to panic. The message doesn't necessarily mean anything malicious has happened to your Apple account. In fact, in the vast majority cases, there's a simple explanation for ...
Read Full Article

Tuesday September 1, 2020 2:54 pm PDT by Hartley Charlton
In March 2020, Apple updated its popular iPad Pro lineup, introducing a faster A12Z Bionic processor, dual rear cameras, a new LiDAR scanner for improved augmented reality capabilities, improved audio, and an optional Magic Keyboard accessory that adds a trackpad to the iPad for the first time. Although the previous 2018 models are no longer sold by Apple, they tend to be readily available ...
Read Full Article

iOS 14 Hidden Features You Need to Know About

Wednesday August 26, 2020 3:31 pm PDT by Juli Clover
There are hundreds of new features in iOS 14, many of which are immediately obvious like the new Home Screen widgets, the App Library, pinned conversations and mentions in Messages, a compact UI for Siri and Phone calls, and more, but there are also tons of features that are less immediately obvious. In this guide and accompanying video, we've rounded up some of the most useful hidden features ...
Read Full Article • 78 comments

Tuesday October 20, 2020 7:44 pm PDT by Juli Clover
With every iteration of iOS, Apple adds new privacy features to better protect iPhone and iPad users, and iOS 14 is no exception. This year's update is worth downloading for the privacy protections alone, which include Privacy Reports in Safari, recording indicators, an option to share approximate location with apps instead of precise locations, and more. In this guide, we've highlighted all ...
Read Full Article • 92 comments

Wednesday August 19, 2020 4:01 am PDT by Hartley Charlton
Apple offers two different 2020 MacBook Air base configurations; one with a dual-core Intel Core i3 processor and one with a quad-core Intel Core i5 processor. Our guide answers the question of how to decide which of these two configurations is best for you. You can customize the internal specifications of either of these two ‌MacBook Air‌ base configurations at the time of purchase, so it's ...
Read Full Article

Tuesday September 1, 2020 4:53 pm PDT by Juli Clover
Apple in iOS 14 and watchOS 7 introduced a new Sleep Tracking feature that's designed to help you monitor how much sleep you're getting each night with Apple Watch and improve your sleep habits through bedtime reminders and a winding down process. This guide walks through all of the Sleep Tracking functionality available on the iPhone and the Apple Watch in Apple's 2020 software updates. S...
Read Full Article • 81 comments
Newer Posts
Archives
Older Posts