Apple has launched a new 10.5-inch iPad Air that can be viewed as a lower-priced successor to the second-generation 10.5-inch iPad Pro, which has been discontinued. Below, we compare tech specs and features. 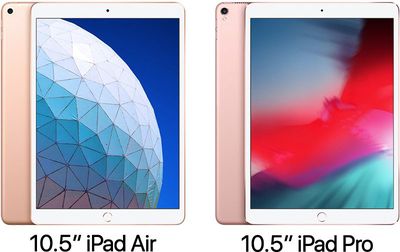 Design wise, the iPads have a lot of similarities, including dimensions, thinness, and overall appearance. Both have a Touch ID home button, a headphone jack, and a Lightning connector, but the new ‌iPad Air‌ has only two speakers along the bottom, whereas the 10.5-inch ‌iPad Pro‌ has four speakers.

The new ‌iPad Air‌ is available in Silver, Space Gray, and a newer Gold finish that essentially merges the previously separate Gold and Rose Gold finishes that were available for the 10.5-inch ‌iPad Pro‌.

In terms of battery life, both iPads last up to 10 hours per charge, according to Apple's internal testing.

The front FaceTime HD cameras are the same 7-megapixel sensors with Live Photos, Retina Flash, and other identical features on both iPads.

Both iPads are compatible with the first-generation Apple Pencil and the 10.5-inch Smart Keyboard.

The new ‌iPad Air‌ can be ordered starting today with in-store availability beginning next week in the United States and many other regions.

JPack
This product has Tim Cook written all over it. It makes sense to reuse the existing supply chain.

The iPad Air 2 was discontinued because people didn't want to pay $499 for a media consumption iPad. So the $329 iPad was born. There's a similar group of customers who don't want to pay $649 for an iPad Pro. This iPad Air fits the bill perfectly.
Score: 21 Votes (Like | Disagree)

smartbot
I think I will stick with the 10.5 pro. The quad speakers are amazing!
Score: 20 Votes (Like | Disagree)

BaracksPhallusPalace
Considering you can still get a 2017 IPP 10.5" for $525-550 from other retailers, idk why you would spend around the same price for this when it's only got a 60hz display... i tried using a 9.7" IPP recently and the blur switching between apps on a screen that size is terrible. Those ProMotion displays should really be standardized across the entire iPad lineup.
Score: 16 Votes (Like | Disagree)

Achillias
Expensive in Europe and same boring design. Apple is the only company who can do that.
Score: 14 Votes (Like | Disagree)

azentropy
I had a 10.5 Pro and "upgraded" to the 11 Pro. FaceID is driving me crazy as I seem to always be blocking the stinking camera. So glad to see they haven't abandoned the TouchID design altogether.
Score: 11 Votes (Like | Disagree)
Read All Comments