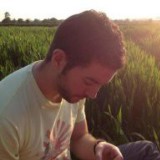 Tim is a Contributing Editor at MacRumors. His writing has appeared in over 30 newsstand print and online publications covering a range of topics. Originally from Liverpool, England, Tim can sometimes be found accessing a personal wi-fi hotspot on the Yorkshire Moors. 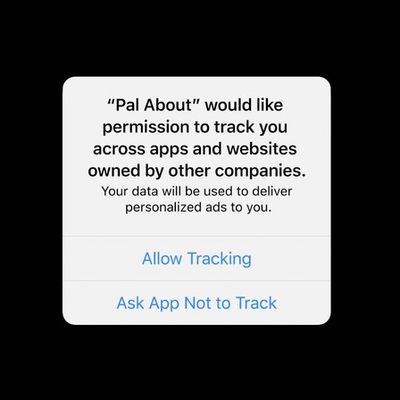 Friday July 3, 2020 3:44 am PDT by Tim Hardwick
A Google-backed group of European digital advertising associations has criticized Apple for requiring apps in iOS 14 to seek additional permission from users before tracking them across other apps and websites, reports Reuters. Sixteen marketing associations, some of which are backed by Facebook and Alphabet's Google, faulted Apple for not adhering to an ad-industry system for seeking user...
Read Full Article • 234 comments 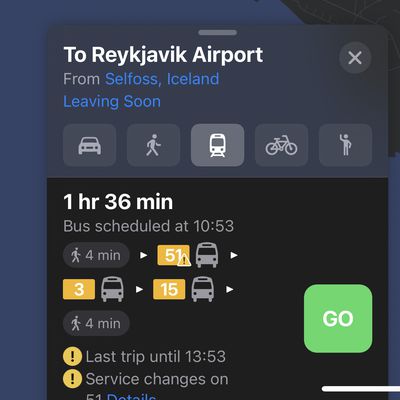 Friday July 3, 2020 2:42 am PDT by Tim Hardwick
Apple appears to have updated its Maps coverage to add transit directions in Iceland, with a focus on bus routes in and around the capital, Reykjavik. Apple Maps users in the region can now select public transportation routes when getting directions between two locations. Transit directions were first added to ‌Apple Maps‌ in 2015 with the launch of iOS 9. Maps initially only offered...
Read Full Article • 28 comments

Friday July 3, 2020 1:56 am PDT by Tim Hardwick
Apple's upcoming "iPhone 12" will feature "high-end" lens arrays in the rear camera to improve image quality, according to respected analyst Ming-Chi Kuo. In a new research note seen by MacRumors, Kuo says Largan will supply the premium camera lenses to Apple for the phones from mid-July, although Apple has received the same components slightly earlier in the last couple of years....
Read Full Article • 46 comments

Thursday July 2, 2020 4:39 pm PDT by Tim Hardwick
Messages don't always arrive on your iPhone or iPad at the most convenient time. Fortunately, iOS allows you to mute conversations conducted over the stock Messages app, so you don't have to silence your device or turn it off completely to press pause on those constant message alerts. Using the mute feature in Apple's Messages app, you can silence group conversations and conversations with...
Read Full Article

Thursday July 2, 2020 4:32 pm PDT by Tim Hardwick
In iOS 14, Apple has added several new features to its native Messages app, including the ability to set a group photo for a multi-person chat. Setting a photo for a group conversation brings a neat bit of customization to the Messages app and it lets you identify the chat in your conversations list more easily. You can also give group chats a custom name, which combined with a group...
Read Full Article

How to Use Mentions in the iOS 14 Messages App

Thursday July 2, 2020 4:28 pm PDT by Tim Hardwick
In iOS 14, Apple has added several new features to its native Messages app, including the ability to mention people in a group conversation. When that person is mentioned, their name gets highlighted in the message text, and they'll be notified that someone mentioned them. The neat thing about Mentions is that you can get alerted to them even if they appear in a group chat that you’ve...
Read Full Article

Thursday July 2, 2020 3:49 am PDT by Tim Hardwick
Apple is "battling to free stuck shipments" at the Indian port of Chennai after the country ramped up scrutiny of imports from China following rising tensions between the two nations. Reuters reports that customs officers at the Southern Indian port have held back more than 150 shipments of smartphones and electronic parts from China, which has disrupted operations at plants owned by Apple...
Read Full Article • 134 comments

Thursday July 2, 2020 3:03 am PDT by Tim Hardwick
Apple is rumored to be releasing a mini LED-backlit iPad Pro and a new mini-LED MacBook Pro series over the next 18 months, and the devices have just picked up two new suppliers, according to industry sources. DigiTimes today reports that two former Apple suppliers, Taiwan's Zhen Ding Technology and Flexium Interconnect, have entered the supply chain to make the flexible printed circuit...
Read Full Article • 43 comments

Thursday July 2, 2020 1:42 am PDT by Tim Hardwick
WhatsApp has announced it is rolling out a number of new features across its app, web, and desktop variants, including a QR code scanning option for contacts and a new Dark mode theme that extends to computers. WhatsApp has been extensively testing the use of QR codes on mobile to let users add contacts to the messaging app instead of typing in digits one by one, and it sounds like it's almost ...
Read Full Article • 34 comments

How to Send Inline Replies in the iOS 14 Messages App

Wednesday July 1, 2020 6:00 pm PDT by Tim Hardwick
In iOS 14, Apple has added several new features to its native Messages app, including the ability to send inline replies to specific messages that appear in the conversation thread of a group chat. The neat thing about inline replies is that it allows you to respond to a particular person's message in the thread, and then view all the responses to the message in either the full group...
Read Full Article

Wednesday July 1, 2020 5:51 pm PDT by Tim Hardwick
In iOS 14, Apple has added several new features to its native Messages app, including the an improved interface for filtering incoming messages. Message filtering sorts messages from people who are not in your contacts into a separate list, which makes it easier to view messages from friends, family, or colleagues in their own special Known Senders list. All other messages, from OTP codes ...
Read Full Article

Wednesday July 1, 2020 5:45 pm PDT by Tim Hardwick
In iOS 14, Apple has made it easier to keep track of conversation threads in Messages by allowing users to pin threads in the app. Pinned conversations live at the top of the main messages list and appear as large contact circles. You can have a maximum of nine pinned threads. You can pin both one-on-one conversations and group chats in Messages, and threads can include both SMS texts...
Read Full Article

Wednesday July 1, 2020 4:13 am PDT by Tim Hardwick
Following over a year of testing in select countries, Spotify is debuting a new subscription plan called Premium Duo, which costs $12.99 a month and allows two people who live under the same roof to share the one plan while owning separate Spotify accounts. Duo costs $3 more than a single Premium membership, and given the new plan is aimed at couples and roommates, both users must live at...
Read Full Article • 47 comments

Wednesday July 1, 2020 3:40 am PDT by Tim Hardwick
As expected, Apple's first MacBook Pro with a Retina display is now officially classed as "obsolete" worldwide, just over eight years after its release. In a support document, Apple notes that obsolete products are no longer eligible for hardware service, with "no exceptions." This means that any mid-2012 Retina ‌MacBook Pro‌ 15-inch models still out there that require a battery or other...
Read Full Article • 208 comments

Nikkei: 'iPhone 12' Final Assembly Could Be Delayed to Early October

Wednesday July 1, 2020 2:58 am PDT by Tim Hardwick
Apple's "iPhone 12" lineup is facing mass production delays of between four weeks and two months because of postponements caused by factory lockdowns and workplace absences during the global health crisis, according to a new report from Nikkei Asian Review. "What the progress looks like now is months of delay in terms of mass production, but Apple is doing everything it can to shorten the...
Read Full Article • 52 comments

Wednesday July 1, 2020 1:57 am PDT by Tim Hardwick
Leaker L0vetodream this morning posted a tweet corroborating recent rumors that Apple's "iPhone 12" lineup won't come with EarPods or a charger in the box, adding that this will also eventually apply to the existing second-generation iPhone SE. L0vetodream also claims that future iPhone packaging will be "thinner" and "exquisite," which would make sense if Apple's handsets are set to come in ...
Read Full Article • 259 comments

Tuesday June 30, 2020 4:12 am PDT by Tim Hardwick
Apple Pay is launching in Serbia today, according to tipsters who got in touch with MacRumors. ProCredit bank is launching ‌Apple Pay‌ in the country as of June 30, according to Mastercard's Serbian website. Raiffeisen bank is also believed to be coming on board with support for Apple's digital payment method. ‌Apple Pay‌ ProCredit banka Srbija @MastercardRS pic.twitter.com/rWfMAejxuk— ...
Read Full Article • 7 comments

Tuesday June 30, 2020 3:55 am PDT by Tim Hardwick
Spotify today launches its real-time lyrics feature in 26 worldwide markets including India, countries in Southeast Asia, and Latin America, according to TechCrunch. In mobile Spotify apps that receive the update, users can tap the Lyrics card at the bottom of the Now Playing screen, and lyrics scroll across the screen in time to the music, allowing listeners to read them or even sing along ...
Read Full Article • 22 comments

Tuesday June 30, 2020 3:20 am PDT by Tim Hardwick
Dolby Atmos support for the Apple TV app arrived this week on select LG smart TVs, reports 9to5Mac. Dolby Atmos enables sounds to be precisely placed and moved in three-dimensional space, rather than being constrained to channels. LG confirmed in February that Dolby Atmos support for the ‌Apple TV‌ app and AirPlay 2 would be coming in a software update to compatible TVs later in the year. No...
Read Full Article • 48 comments

Tuesday June 30, 2020 2:45 am PDT by Tim Hardwick
Google Photos has stopped backing up images and videos from folders created by social media and messaging apps like WhatsApp, Messages, and TikTok (via Android Police). Previously, Google's photo app would automatically upload all media saved to an iOS device, including any files saved in folders originating from social and messaging apps. Google says it's now turning off this aspect of...
Read Full Article • 14 comments
Newer Posts
Archives
Older Posts