New renders and design details for the long-rumored Google Pixel Fold have emerged online, including display sizes and overall dimensions, as well as an expected launch date in the spring. 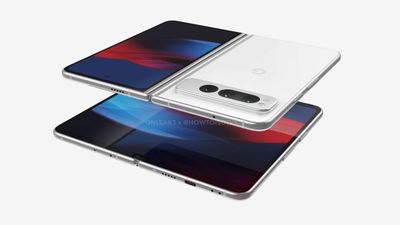 According to established leaker OnLeaks (via Howtoisolve), previous rumors were correct to claim that the Google Pixel Fold will adopt a form factor similar to the Oppo Find N. Google's foldable is set to feature a 5.79-inch outer display with a center hole-punch camera cutout, with a 7.69-inch inner screen and a right-aligned selfie camera cutout embedded in a slightly thicker bezel. The Samsung-built OLED panels are said to feature an ultra-thin glass (UTG) cover, also supplied by Samsung.

The display sizes are said to be housed in a rounded-edge chassis measuring approximately 158.7 x 139.7 x 5.7mm when unfolded, making it marginally wider than the Oppo Find N and approximately the same height, but with a slightly bulkier camera bump with an 8.3mm thickness.

The camera bump on the back side of the screen, reminiscent of Google's latest Pixel phone, houses a triple-lens strip with flash and microphone, while the SIM tray is located at the bottom edge of the outer screen. The USB-C port sits directly opposite when folded. The volume buttons sit on the right edge alongside a fingerprint scanner-equipped power button.

Previous rumors have suggested the Pixel Fold will be powered by Google's Tensor G2 chip processor and come with at least 12GB of RAM. The likelihood is that it will run Android 13. The starting price is expected to be $1,799, with black and silver color options available when the device launches in May 2023.

Google's foldable has been a long time coming. Documents leaked in 2020 suggested Google planned to release a in-folding smartphone in late 2021, but that didn't happen. Google didn't even mention foldable devices at its recent I/O developer conference, leaving some Pixel fans wondering if the device had been canned.

In 2019, when Google revealed it was developing technology that could be used in a foldable, it admitted in the same breath that it didn't see "a clear use case yet." However, well-connected Display Supply Chain Consultants (DSCC) analyst Ross Young has said the emergence of software innovations or a new chipset that Google wants to incorporate likely held back the device.

Meanwhile, Samsung's Galaxy Z Fold and Flip devices having made inroads into the nascent market, and Google is in catchup mode. Where that leaves Apple is unclear. The company's long-rumored foldable iPhone is unlikely to launch until 2025 or later, according to Apple analyst Ming-Chi Kuo. Apple's first foldable device may even be a hybrid ‌‌iPhone‌‌ and ‌iPad‌, or simply a foldable ‌‌iPad‌‌.

If or when its foldable comes, Apple's long game has allowed it to watch and learn. Early foldable devices had a long list of issues with screen quality and durability, which perhaps explains why Apple has yet to come out with a foldable device of its own.

BrownyQ
Foldables are nice in theory to me.

But until someone comes up with a material that can fold and unfold without leaving any noticeable crease or indent, I'd rather stick to the tried, true and boring slate form factor.
Score: 24 Votes (Like | Disagree)

HobeSoundDarryl
Phone when closed, tablet mini when opened. For those of us able to look beyond one brand, it seems like having both a phone and tablet in one would be a great device.

My phone and tablet (in one) is iPad Mini 6 cellular. It works great in both roles for me (buds + VOIP app for phone calls). The one thing I wish it could do is fold/roll into a pocketable size.

This thread should fill up with a massive pile of disgust and the usual pounding of something Apple doesn't sell (yet) but I bet that collective sentiment will make a remarkable flip as soon as Apple rolls one of these out. After all, "we" used to ridicule phablet-size phones to no end while Apple clung to 3.5" and then 4" as "perfection" screen sizes. This will be no different.
Score: 18 Votes (Like | Disagree)

MayaUser
beautiful, at least google phones are not wobbling
Score: 13 Votes (Like | Disagree)

MrGimper
I'll only be interested when the folded size is the same thickness as the current iphone 14, and there's NO crease in the screen when unfolded.
Score: 12 Votes (Like | Disagree)
Read All Comments

Tuesday January 24, 2023 1:11 pm PST by Joe Rossignol
While the new Mac mini with the M2 chip has a lower $599 starting price, the base model with 256GB of storage has slower SSD read and write speeds compared to the previous-generation model with the M1 chip and 256GB of storage. A teardown of the new Mac mini shared by YouTube channel Brandon Geekabit reveals that the 256GB model is equipped with only a single 256GB storage chip, while the...
Read Full Article • 570 comments