Jony Ive is working on a project for Apple, but this time it's neither hardware nor software. The former Apple design chief is an executive producer in forthcoming Apple TV+ animated film "The Boy, the Mole, the Fox, and the Horse," which will debut on the streaming service over the festive period. 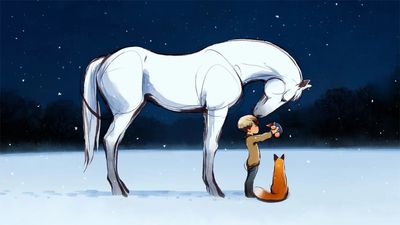 Adapted from the bestselling Charlie Mackesy book of the same name, the short film tells the story of a friendship that kindles between the four characters as they search for a home for the boy. It stars Tom Hollander as The Mole, Idris Elba as The Fox, Gabriel Byrne as The Horse, and newcomer Jude Coward Nicoll as The Boy.

The film will be directed by Peter Baynton, while the production team includes Cara Speller, J. J. Abrams, and Hannah Minghella. Ive is credited as an executive producer alongside Woody Harrelson, a known friend of the famous Apple designer. The film will have an original score by composer Isobel Waller-Bridge, performed by the BBC Concert Orchestra and conducted by Geoff Alexander. From the Apple press release:

A story of kindness, friendship, courage and hope for viewers of all ages in a heartwarming, classically animated film based on Charlie Mackesy's book, "The Boy, the Mole, the Fox and the Horse." The poignant and heartfelt journey follows the unlikely friendship of a boy, a mole, a fox and a horse travelling together in the boy's search for home.

"The journey of making the film of 'The Boy, the Mole, the Fox and the Horse' with my incredibly gifted animation team has been a magical one," says author Charlie Mackesy. "I never dreamt it would happen — but it's so moving to think the story will be watched at Christmas. I really hope it brings a bit of joy, laughter and comfort."

Ive announced his departure from Apple in June 2019, with the goal of creating his own design firm, LoveFrom. At the time, Ive said that Apple would be one of his primary clients, with Ive continuing to do design work.

He went on to work on the 24-inch iMac and other products, plus he provided guidance on the Apple Car design. However, it was reported in July that the partnership between Apple and Ive had come to an end.

Set for release on Christmas Day, December 25, "The Boy, the Mole, the Fox, and the Horse" will premiere on the BBC in the United Kingdom and will also be available to stream on ‌Apple TV+‌ in the UK and other countries.

Marco Klobas
It'll be thin as a film.
Score: 23 Votes (Like | Disagree)

Slippery Gimp
“This the thinnest horse we’ve ever done, and the mole is 17% more moley than the previous one. The fox is a reskin of the last one, and is unapologetically cunning. We can’t wait for our customers eyes to see these”.
Score: 18 Votes (Like | Disagree)

Alex Cai
The horse have an aluminum case and have overheating problems
Score: 11 Votes (Like | Disagree)

The horse have an aluminum case and have overheating problems

“This the thinnest horse we’ve ever done, and the mole is 17% more moley than the previous one. The fox is a reskin of the last one, and is unapologetically cunning. We can’t wait for our customers eyes to see these”.

As soon as I read the title I skipped the article straight down to the comment section.

Not dissapointed!
Score: 7 Votes (Like | Disagree)
Read All Comments

Tuesday July 12, 2022 2:28 pm PDT by Juli Clover
Since former Apple design chief Jony Ive left Apple in 2019, he has continued to work for the company as a consultant through his LoveFrom design firm, but the partnership between Apple and Ive is now over, according to The New York Times. Apple and Ive have agreed to stop working together, ending a more than 30-year relationship. Ive has been responsible for some of Apple's biggest...
Read Full Article • 412 comments

Wednesday November 2, 2022 7:14 am PDT by Hartley Charlton
Former Apple design chief Sir Jony Ive will be featured on the cover of WSJ. Magazine later this month, reflecting on his work at Apple and design philosophy in a wide-ranging interview. Image by Alasdair McLellan for WSJ. Magazine. The interview spans topics including Ive's youth, first meeting with Steve Jobs and work at Apple, and recent work at his design company LoveFrom. Reflecting on...
Read Full Article • 119 comments

Monday May 9, 2022 4:49 am PDT by Tim Hardwick
Former Apple design chief Jony Ive, who still partners with Apple on products, has revealed his 12 must-have design tools for making, marking, measuring, and carrying with him every day. The list appears in a special issue of Financial Times' "How to Spend It" magazine (paywalled), of which Ive is guest editor, and the designer uses the opportunity to put the focus on his obsession with...
Read Full Article • 220 comments

Thursday August 4, 2022 7:08 pm PDT by Joe Rossignol
Apple TV+'s first feature-length 3D animated film "Luck" is now available to watch in the U.S. a few hours earlier than promised. Apple is promoting the film with a full-page takeover on its homepage, with characters from the film appearing in several spots. Created by Skydance Animation, "Luck" revolves around an unlucky person named Sam Greenfield who suddenly finds herself in the...
Read Full Article • 95 comments

Thursday November 3, 2022 8:16 am PDT by Tim Hardwick
Apple is offering a two-month free Apple TV+ trial as a tie-in promotion for new documentary film "My Mind & Me" starring actress and singer Selena Gomez. A URL link to the offer was shared by Gomez on Twitter as a "special gift" to her fans ahead of the film's availability to stream on Apple TV+, starting November 4. Clicking on the link gives "new and qualified returning subscribers" a ...
Read Full Article • 88 comments

Thursday December 8, 2022 2:45 am PST by Sami Fathi
Apple yesterday announced that end-to-end encryption is coming to even more sensitive types of iCloud data, including device backups, messages, photos, and more, meeting the longstanding demand of both users and privacy groups who have rallied for the company to take the significant step forward in user privacy. iCloud end-to-end encryption, or what Apple calls "Advanced Data Protection,"...
Read Full Article • 147 comments