Apple today celebrated reaching the milestone of 100 million songs on Apple Music and commented upon two areas where it is working to improve the service. 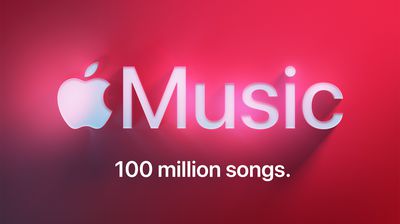 Reflecting on the growth of music on Apple's platforms in a press release, ‌Apple Music‌'s global head of editorial Rachel Newman today said:

Twenty-one years on from the invention of iTunes and the debut of the original iPod, we've gone from 1,000 songs in your pocket to 100,000x that on Apple Music. It's phenomenal growth by any metric. The entire history, present, and future of music is at your fingertips or voice command.
More music than you can listen to in a lifetime, or several lifetimes. More music than any other platform. Simply the biggest collection of music, in any format, ever.

One hundred million songs — it's a number that will continue to grow and exponentially multiply. But it's more than just a number, representing something much more significant — the tectonic shift in the business of music making and distribution over these past two decades.

She added that the rise of ‌Apple Music‌ has helped democratize the music industry as a whole amid a massive expansion of content:

Back in the 1960s, only 5,000 new albums were released each year. Today, anywhere in the world, in 167 countries and regions on Apple Music, any artist of any description can write and record a song and release it globally. Every day, over 20,000 singers and songwriters are delivering new songs to Apple Music — songs that make our catalog even better than it was the day before. One hundred million songs is evidence of a more democratic space, where anyone, even a new artist making music out of their bedroom, can have the next big hit.

Looking toward the future, Newman pointed out the two areas of focus for improving ‌Apple Music‌ in the future, starting with human curation to drive recommendation algorithms.

This isn't just an opportunity to reflect on how far we've come, but also a moment to look forward to the work we have left to do. At Apple Music, human curation has always been the core to everything we do, both in ways you can see, like our editorial playlists; and ways you can't, like the human touch that drives our recommendation algorithms. Now more than ever, we know that investment in human curation will be key in making us the very best at connecting artists and audiences.

With such a huge expanse of songs, we know you need someone there to guide you through. Gone are the days of hitting shuffle on your library: Now it's on us to help you discover new favorites and rediscover forgotten gems, whether it's one of our expert radio hosts lighting your path, or a handcrafted playlist.

The statement also pointed out that ‌Apple Music‌ seeks to provide more context for music on the platform, such as via ‌Apple Music‌ Today:

We also know that it's more important than ever that we are elevating artists' voices and providing opportunities for them to tell their own stories and contextualize their music. It is no longer enough to just connect artists and fans, it's about making those connections deeper and more meaningful. And just one of the many ways we are helping to provide context is through the new Apple Music Today series, where we'll be picking a new song every day and diving into its history, because we know that each of the 100 million songs in our catalog has its own story.

After adding Spatial Audio and Lossless Audio in 2021, ‌Apple Music‌ this year gained DJ Mixes in Spatial Audio, concert livestreams, playlist sorting and favorite artists, and exclusive live releases and covers with "‌Apple Music‌ Sessions. It is expected to release an all-new app called "Apple Classical" specially for classical music by the end of 2022.

CarAnalogy
Was hoping that sentence was going to end “…with big updates to the Music app on all platforms that bring much needed UI and performance improvements.”
Score: 21 Votes (Like | Disagree)

Amazing Iceman
Every day it gets harder to find new good music.
Almost everybody is an artist, as you don't need to know how to sing to be a singer.
No need to know how to play an instrument, just copy/paste pieces from the work of others.
Want to attract tons of people to your concerts? Sing in underwear.
Want the crowds to cheer? Curse, curse, curse, swear, swear, swear, and be very explicit.

Under these conditions, I don't really care if the collection has reached 100M songs.
High volume doesn't equal to high quality.
Score: 19 Votes (Like | Disagree)

AnaphaseAway
they need to fix their UI and add no-brainer items such as their version of spotifys On repeat playlist....
Score: 13 Votes (Like | Disagree)

Retskrad
What an odd press release. That's like YouTube announcing that X videos have now been uploaded to YouTube. Why should we care? What Eddy Cue and the Music team need to focus on is rewriting the entire backend of Apple Music. They are getting spanked by Spotify in app performance. Everything is instant in Spotify. Loading playlists, searching, playing a song. A small delay comes with every action you take in Apple Music.
Score: 11 Votes (Like | Disagree)

unregbaron
Corporate announcements like this don't serve Apple well, like when they talk about the App Store having XXXX number of apps, it's meaningless if the apps are scammy trash. Is 100m songs better than 50m - why?
Score: 8 Votes (Like | Disagree)
Read All Comments