Speaking at Università Degli Studi di Napoli Federico II in Naples, Italy, Apple CEO Tim Cook said that not too long from today, people will wonder how they led a life without augmented reality, stressing the "profound" impact it will have on the not so distant future. 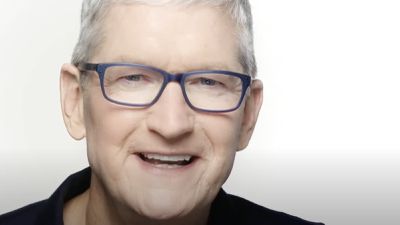 At the university, Cook was awarded an Honorary Degree in Innovation and International Management and also sat down for a Q&A session with students. Responding to a question from a student on what future technologies excite him the most, Cook pointed to artificial intelligence, calling it a "fundamental, horizontal technology that will touch everything in our lives," ranging from innovations in the Apple Watch to "many other things" Apple is working on.

Cook, more importantly, stressed his excitement for augmented reality. Cook suggested that augmented reality's impact on the world will be as profound as the internet itself, saying people will wonder how they led a life without it. As he was speaking on augmented reality, the live stream of the Q&A session abruptly cut, so Cook's full comment on the subject is not publicly known.

I'm super excited about augmented reality. Because I think that we've had a great conversation here today, but if we could augment that with something from the virtual world, it would have arguably been even better. So I think that if you, and this will happen clearly not too long from now, if you look back at a point in time, you know, zoom out to the future and look back, you'll wonder how you led your life without augmented reality. Just like today, we wonder, how did people like me grow up without the internet. And so I think it could be that profound, and it's not going to be profound overnight...

Cook has in the past expressed his personal excitement for augmented reality and has hinted that Apple is working on AR/VR products. The company's first AR/VR product, a high-end headset rumored to be called "Reality Pro," is expected to be announced as soon as January. The headset has been in development for several years and will be Apple's first major new product since the "One more thing" introduction of the Apple Watch in 2014.

"Reality Pro" is rumored to feature a lightweight design, two 4K micro-OLED displays, 15 optical modules, two main processors, Wi-Fi 6E connectivity, eye tracking, and more. The headset will run the realityOS operating system, which was seemingly confirmed by App Store logs. The device is expected to cost somewhere around $3,000, with a more affordable option reportedly in the works.

fenderbass146
Highly doubt it…I’m wishing we could go back to not being connected 24/7 and go back to dumb phones.
Score: 80 Votes (Like | Disagree)

I already have to use electronic devices enough as it is!
Score: 58 Votes (Like | Disagree)

chrono1081
No thanks. While I do find AR interesting, the older I get the less excited I am about adding more technology to my life. If I was a kid I'd be all over this, as an adult, no thank you.
Score: 50 Votes (Like | Disagree)

nburwell
I might be in the minority, but I have no interest in AR. Sorry Tim.
Score: 35 Votes (Like | Disagree)
Read All Comments