It's been a crazy busy few days thanks to Apple's "Far Out" media event where we saw announcements in three major product categories including the highly anticipated iPhone 14 lineup. 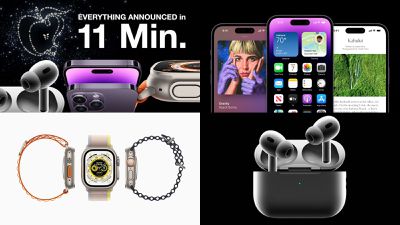 Following Wednesday's event, we spent the rest of the day and beyond digging deeper into all of Apple's new products, so make sure to check out all of our coverage that extends beyond the announcements highlighted below!

Everything Announced at This Week's Apple Event in Just 11 Minutes

The event lasted over 90 minutes, but we've recapped all of the highlights in a video lasting just 11 minutes, and be sure to check out our associated article with links to all of our coverage from the busy day.

Apple this week announced the high-end iPhone 14 Pro and ‌iPhone 14 Pro‌ Max, featuring a "Dynamic Island" to surface alerts and activity in a new way, a brighter display with always-on functionality, the A16 Bionic chip, a more advanced camera system, new color options, and more.

The ‌iPhone 14 Pro‌ and ‌iPhone 14 Pro‌ Max continue to be priced at $999 and $1,099, respectively. Pre-orders are already underway, with availability beginning Friday, September 16, but we're already seeing some delayed shipping for new orders.

Alongside the Pro models, Apple also announced the new iPhone 14 and ‌iPhone 14‌ Plus, coming in 6.1-inch and 6.7-inch sizes that have the same design as the iPhone 13 but feature new cameras, faster performance, and satellite connectivity.

Apple at its "Far Out" media event this week announced the Apple Watch Ultra, a new feature-rich smartwatch for athletes and explorers, coming with an all-new design, a large flat sapphire crystal display, an additional programmable Action button, and cellular as standard.

The Apple Watch Ultra is priced at $799 and orders are open now ahead of a September 23 launch.

For more mainstream users, Apple also introduced the Apple Watch Series 8 with the same overall design as the Series 7, including a larger display that curves around the edges. One of the headline new features of the Series 8 is a new body temperature sensor designed for women's health purposes, such as knowing when ovulation has occurred.

The ‌Apple Watch Series 8‌ is available for pre-order now and will be available starting Friday, September 16. The Series 8 starts at $399 for GPS and $499 for cellular models.

The second-generation ‌Apple Watch SE‌ starts at $249 for the GPS model and $299 for the cellular model. Orders are currently open and they will start delivering on September 16.

Rounding out this week's announcements, Apple unveiled the second-generation AirPods Pro with an upgraded H2 chip that provides up to twice as much active noise cancellation and more.

A new Touch Control feature on the stem allows users to adjust the volume with a swipe up or down, while the silicone ear tips are now available in a new XS size alongside small, medium, and large.

The new AirPods Pro are available to order now with pricing set at $249 in the United States. The second-generation AirPods Pro will launch on September 23.

Eldaerenth Faexidor
Yay to the new AirPods Pro! Can’t wait for the delivery in 2 weeks.
Score: 3 Votes (Like | Disagree)

currentinterest
They made a bundle from me, bought the Apple Watch Ultra, AirPods Pro 2, and iPhone 14 Pro Max (256GB). Next up is a new iPad Pro. When my name comes up in the Apple Store database it has two words next to it: EASY MARK.
Score: 2 Votes (Like | Disagree)

Can’t wait to get the pro max. Too bad I bought the APP recently. The APP 2 has some solid updates.

It was hard for me not to buy APP1 as a needed a replacement for my aging Jabra and now I wanted to try APP. Not knowing for sure that they would come, only rumours, was a big annoyance. The volume controls on APP2 is a very pleasant surprise.
Score: 1 Votes (Like | Disagree)
Read All Comments