In what was simultaneously a surprise and not a surprise, Apple this week announced it has discontinued the iPod touch after almost 15 years and seven generations, bringing the entire iPod lineup to an end. 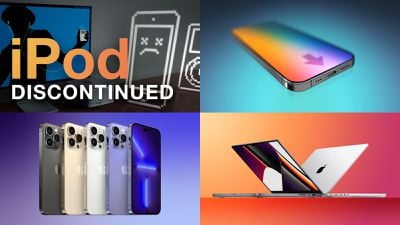 Other news this week saw rumors about both the iPhone 14 Pro (slightly larger displays!) and iPhone 15 (USB-C instead of Lightning?), as well as a report that Apple is planning to launch the AirPods Max in new colors later this year, so read on for details on these stories and more!

Apple this week announced that it is discontinuing the iPod touch, which remains available while supplies last. The device is already listed as "sold out" on Apple's online store in the United States, and inventory is quickly depleting in other countries and at third-party resellers as well.

First introduced in October 2001, the iPod was one of Apple's most iconic products, but the device's discontinuation became inevitable over time given the wide array of Apple products that can play music, including the iPhone, iPad, Apple Watch, HomePod mini, and more.

With the last iPod now discontinued, it's the end of an era. iPod models released over the years included the original iPod (later known as the iPod classic), iPod mini, iPod photo, iPod nano, iPod shuffle, and iPod touch.

What was your favorite iPod model? Let us know in the MacRumors forums and be sure to share any photos of your iPod collection.

Young said the screen size differences are due to the iPhone 14 Pro models having slightly narrower bezels around the display compared to iPhone 13 Pro models and a new pill-and-hole design replacing the notch.

iPhone 15 Rumored to Switch From Lightning to USB-C

Apple plans to release at least one new iPhone 15 model with a USB-C port instead of a Lightning connector, according to analyst Ming-Chi Kuo. Bloomberg's Mark Gurman concurs that USB-C iPhones are in testing and that Apple is also planning an adapter that will let them work with current Lightning-based accessories.

If this rumor proves to be true, we'll still have to wait a while for the first USB-C iPhone. Kuo expects the Lightning connector to stick around for the iPhone 14 lineup launching later this year, with the switch to USB-C expected to occur with the iPhone 15 in 2023. Gurman similarly says the switch won't happen until 2023 at the earliest.

Apple plans to release its high-end AirPods Max headphones in new colors in the future, according to Bloomberg's Mark Gurman.

Released in December 2020, the AirPods Max are currently available in five colors, including space gray, silver, sky blue, green, and pink. It's unclear which new colors would be introduced.

While the new models have crowd-pleasing features, we've put together a list of five things you still can't do with a MacBook Pro, such as take advantage of SD cards with faster UHS-III speeds. Check out the full list to see which features and capabilities are still missing.

hcherry
I know this isn’t as popular an opinion, but I love the iPhone mini and will be sad to see it pulled from the lineup.
Score: 10 Votes (Like | Disagree)

I'd love an iPhone mini, but I won't give up the telephoto lens from the Pro. So I'm stuck with the Pro.
Score: 2 Votes (Like | Disagree)

I personally also like the size of the Mini a lot and find it sad that it's pulled from the line-up (IMO 5-5.5" are a good compromise between one-hand operation and having enough space on the screen).
That being said, maybe Apple still needs to figure out the right formula for the Mini to reach more people (maybe it could use slightly older tech and be cheaper, so it sits a bit more in the middle between the SE and the regular iPhone).
Score: 2 Votes (Like | Disagree)

Flight Plan
I have the 12 max pro supercalifragilistic, and would be willing to make the jump to a USB-C phone. If the 15 has some "gotta haves", I might consider doing it. You know, like finally fixing Siri. Or giving the camera the ability to take pictures an hour into the future. Bring it, Apple.
Score: 2 Votes (Like | Disagree)

Sales figures are not looking favorable for the next mini. That's saying it without bias.
Score: 1 Votes (Like | Disagree)

I personally also like the size of the Mini a lot and find it sad that it's pulled from the line-up (IMO 5-5.5" are a good compromise between one-hand operation and having enough space on the screen).
That being said, maybe Apple still needs to figure out the right formula for the Mini to reach more people (maybe it could use slightly older tech and be cheaper, so it sits a bit more in the middle between the SE and the regular iPhone).

I hope they go the other direction and build a flagship mini. I love the size but would prefer the higher end build and features.

Since this started with iPods, let’s recall our history. Maybe we will get an iPhone Nano.
Score: 1 Votes (Like | Disagree)
Read All Comments