Apple's new Mac Studio desktop computer will begin arriving to customers this Friday. Ahead of the launch, TechCrunch's Matthew Panzarino spoke with a trio of senior Apple employees about the company's process of designing the Mac Studio. 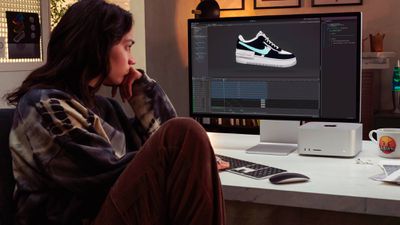 Just like the Mac Pro tower released in late 2019, the Mac Studio was born as a result of Apple's Pro Workflows Team that was created shortly after the company apologized to pro users and ensured that it remains committed to the Mac.

"We look very much at Mac Studio for what it is, a completely new Mac product line," said Tom Boger, vice president of Mac and iPad product marketing at Apple. "Our philosophy was not at all to take a Mac mini and scale it up, it was 'we know we're working on this M1 chip and we want to bring it to those users who want performance and conductivity and a modular system. And let's allow it to live right on people's desks so it's within easy reach."

Xander Soren, director of product marketing for the Pro Apps team at Apple, told Panzarino that creative and pro users expressed a clear desire for a so-called "modular" system that sat between the iMac and the Mac Pro in Apple's desktop lineup.

"I think the way we look at it is we're happy to provide multiple ways for our users to work," added Boger. "So you could decide to have a MacBook Pro with an M1 Max chip in it and you could decide to have a setup in your studio where you bring the MacBook Pro back and forth. And if that's the way that you choose to work, great. But we also have users that prefer to have that desktop that always lives on their desk."

Apple said that it listened to customer feedback to decide which ports to offer on the Mac Studio, and it also designed the computer to ensure that all of those ports were easily accessible on both the front and back of the machine.

"We've got IO right on the front, and even if you need to get to the back, you just spin it around," said Boger. "It's relatively light; it's very small; it fits under most displays at 3.7 inches high. We're really giving users something they've never had before. They've always had to trade off. If I wanted a smaller form factor computer, I had to trade off performance. And what we wanted to do was give people something where you don't have to do that."

Shelly Goldberg, senior director of Mac and iPad product design at Apple, said the Mac Studio was a fun challenge in terms of fitting the powerful performance of the M1 Ultra chip into a more compact form factor with optimal thermal management.

"…The team did hundreds of thermal simulations for the airflow to try to figure out what's the best pattern of airflow through the system to try to optimize for performance and acoustics and ultimately, we came up with the the design that we have which has the inlet on the bottom coming in through over 2,000 machined holes that are all machined at [a specific] angle that rotates as you go around the perimeter," said Goldberg.

As for the Studio Display, Boger said Apple aimed for a "great, very accessible, very mainstream display for all of our Mac users."

"It's a great display if you want to hook up to the MacBook Pro, MacBook Air, Mac mini, Mac Studio, Mac Pro, whatever," said Boger. "And we know that there's still users out there that are using Intel-based Macs and so putting A13 in there processes the audio for Spatial Audio and makes the magic of Center Stage happen."

Notably, many reviewers found the Studio Display's webcam quality to be unsatisfactory, leading Apple to issue a statement indicating that it will be making unspecified improvements in a future software update. No timeframe was provided for the update.

We've rounded up reviews of both the Mac Studio and Studio Display for a closer look at both products ahead of their Friday launch.

MysticCow
So it fills the gap between those who want a system they can't upgrade (iMac) and one they can (Mac Pro) by making a system that...you...can't...upgrade...
Score: 24 Votes (Like | Disagree)

zetokore
> who want performance and conductivity and a modular system

fwmireault
Mac Studio looks like a fantastic and very powerful computer, don’t get me wrong. But their repeated usage of "modular" in their marketing PR is laughable
Score: 21 Votes (Like | Disagree)

filchermcurr
What do they mean when they say modular? It looks pretty singular to me, but I might be misunderstanding the definition...
Score: 16 Votes (Like | Disagree)

JMStearnsX2
Yeah, I’m not seeing how this is remotely “modular”…
Score: 16 Votes (Like | Disagree)

What do they mean when they say modular? It looks pretty singular to me, but I might be misunderstanding the definition...

According to the article,

"Modular, in this sense, consisting of the Mac Studio offering two levels of M1 chip and a paired Studio Display."

I don't think you're misunderstanding the definition; it seems that they are. This is pretty weird, even for Marketing speak. :p

To be clear, I like the Mac Studio and I plan to buy one in the future, but describing it this way is strange and illogical. The Studio has a lot of things going for it; it is counterproductive to tout it as something that it clearly is not.
Score: 13 Votes (Like | Disagree)
Read All Comments