Apple AirTag tracking devices with deactivated speakers have been spotted on eBay and Etsy, raising privacy concerns about the risks of removing one of the AirTag's safeguards, PCMag reports. 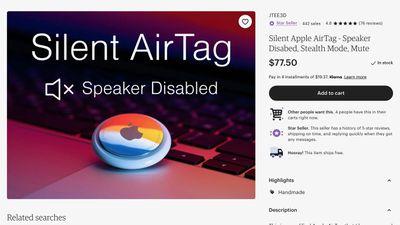 The modified AirTags, dubbed "Silent ‌AirTags‌," have had their internal speaker removed so that they are no longer able to emit a sound to highlight their presence. The Silent AirTag looks identical to a normal AirTag, other than a small hole cut below the device's battery to disconnect the speaker.

The Etsy merchant behind one of the product listings, which offered the Silent AirTag for $77.50, recently took the item off sale and told PCMag:

The intent of this modification was to cater to the several requests of buyers interested in my other AirTag product who were interested in fitting an AirTag to their bikes, pets and power tools. These requests led me to listing it as a product on Etsy, albeit without a great deal of traction. The vast majority of sales shown on my Etsy profile are from sales on my modified slim AirTag, designed to unobtrusively fit inside a purse or wallet.

‌AirTags‌ are a prohibited item on Etsy, and the listing would have been removed had the seller not already removed it themselves. An eBay seller behind a similar listing said that the purpose of the Silent AirTag was to ensure that "it doesn't keep beeping when away from you," such as "if left in car or bike or with a family member." The Silent AirTag purportedly also "reduces the chance of a thief being notified of its hidden location." At the current time, ‌an ‌AirTags‌ begins emitting a sound between eight and 24 hours after being separated from their owner to flag its location.

While the motives behind the Silent AirTag appear to be innocent, their sale has alarmed some privacy advocates online. Eva Galperin, director of cybersecurity at the Electronic Frontier Foundation, tweeted about her concern for the "secondary market for modified ‌AirTags‌ with the speaker disabled for 'stealth mode'," and noted:

Any item that works for the purpose of catching a thief in this manner is also a perfect tool for stalking. That is why Apple advertises them as tools for tracking lost items and not stolen ones.

‌AirTags‌ have been increasingly linked to criminal activity in recent months, including vehicle thefts and stalking cases. While ‌AirTags‌ automatically alert iPhone users, as well as Android users with the Tracker Detect app installed, when an unknown tracker is traveling with them via a notification, the speaker is the AirTag's only anti-stalking mitigation that works automatically and does not depend on the tracked person having a phone.

In addition to releasing the Tracker Detect app for Android, Apple has also shared a Personal Safety User Guide, added the ability to scan for nearby trackers, and updated the AirTag's firmware with shorter intervals between emitted sounds. Despite these measures, the AirTag's anti-stalking safeguards have been criticized for being insufficient.

spazzcat
You can get GPS trackers for way less than $77. Trackers run around $25.
Score: 20 Votes (Like | Disagree)

bacaramac
Only reason this makes headlines is because it’s Apple. Way cheaper options for tracking people that can’t be detected. I understand there are people at risk, but AirTags are not the problem here.
Score: 18 Votes (Like | Disagree)

poorcody
I tried removing a speaker from one of my AirTags to see how hard it was...

Turned out it was easy. Took me literally five minutes and didn't even break anything on the tag. It was pry-open, peal-off speaker, click back shut. I followed this video:

gaximus
I'm curious how many things were stolen because of Tile. Tiles don't have speakers, or notifications that you are being stalked. My guess is that bad people have been tracking people with Tile and other trackers since the beginning, and nobody knew about it. Apple's solution to tracking (with privacy in mind) shed a light on what was happening.
Score: 15 Votes (Like | Disagree)

UsernameAlreadyInUse
This is why we can’t have nice things.
Score: 12 Votes (Like | Disagree)
Read All Comments

Monday May 23, 2022 7:05 am PDT by Hartley Charlton
The iPhone 14 will feature a more expensive "high-end" front-facing camera with autofocus, partly made in South Korea for the first time, ET News reports. Apple reportedly ousted a Chinese candidate to choose LG Innotek, a South Korean company, to supply the iPhone 14's front-facing camera alongside Japan's Sharp. The company is said to have originally planned to switch to LG for the iPhone...
Read Full Article • 96 comments