A year ago today, Apple made AirPods Max available to purchase a week after announcing its first over-ear headphones via a press release on its website. 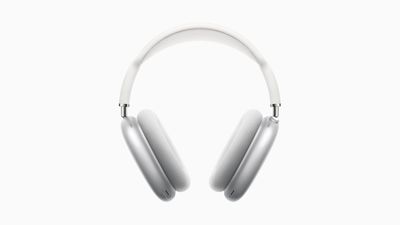 ‌AirPods Max‌ are Apple's first AirPods branded over-ear headphones and are undoubtedly a premium option for customers looking for over-ear headphones in the market. Rumors had initially indicated the headphones would be called "AirPods Studio," and their launch was deemed "imminent" for the majority of 2020.

Borrowing innovations from the Apple Watch, ‌AirPods Max‌ feature a Digital Crown for volume adjustment and a press to invoke Siri, as well as a Side Button for toggling on or off Active Noise Cancellation and Transparency Mode. Like all AirPods and select Beats headphones, ‌AirPods Max‌ feature Apple's H1 chip, which powers tight integration with Apple devices, such as easy pairing and automatic device switching.

Priced at $549, ‌AirPods Max‌ are not an inexpensive purchase for customers, and other options such as Apple's own Beats line offer significantly more affordable over-ear headphones. Along with their hefty price tag, however, reviews of AirPods Max have been favorable, applauding the headphones for being "more than enough to compete with other high-end headphones."

‌AirPods Max‌ have received some criticism, though, for the design of the "Smart Case" and poor battery life, the latter of which was patched by Apple in a software update.

‌AirPods Max‌ initially saw very high demand that saw shipping estimates stretch out into months, but since the initial backlog was cleared, they've become much more readily available with third-party retailers sometimes even offering even discounts of $100 or more.

R-TIN
And I bought them 1 month ago. The best wireless Over The Ear headphones that I ever used. They done a lot of final touches thru the year with the Software. So I think the sound quality specially over VoIP is amazingly good + ANC and Transparency mode is just 10/10.

And to be clear - if you compare Spotify with max sound quality vs Apple Music with lossless quality you year a difference. Even dough it's not maxed out lossless it still sounds more clear and crisp on the air Pods Max.

And lets not forget the All Apple OS:s echo system which AirPods Max is part of. I don't care if Seinheiser or BO got little better sound with cable HEADPHONES.

IT'S ABOUT the whole echo system experience if you are Apple user Then the Airpods Max is the best choice.

This is just amazingly good. And I bought it from Amazon on black Friday so for me this is worth the money.

The only minus is the case and that you can control when to turn them off or on.
Score: 25 Votes (Like | Disagree)

mrow
I love mine. I use them literally every day.
Score: 19 Votes (Like | Disagree)

nortonandreev
My favourite headphones. Still upset I couldn't get the blue ones tho.
Score: 14 Votes (Like | Disagree)

mchart
I could swallow the price point on these things if they offered wireless lossless support. However, without that, they are just such overpriced garbage. For half the cost the Sony's, Bose, etc. all perform on par, if not better. Further, these are not portable at all. At least with the other brands they fold into something smaller and easier to pack into your travel bag.

The only game changer Apple could provide here is true wireless lossless support with iOS devices by offer a direct link via WIFI or something.
Score: 14 Votes (Like | Disagree)

TheYayAreaLiving ?
Hopefully it has become a successful product.
Score: 11 Votes (Like | Disagree)
Read All Comments