Following last week's big Apple event, this week saw some of the fruits of the announcements we saw there, with Apple releasing macOS Monterey and the new MacBook Pro models and third-generation AirPods making their way into customers' hands. 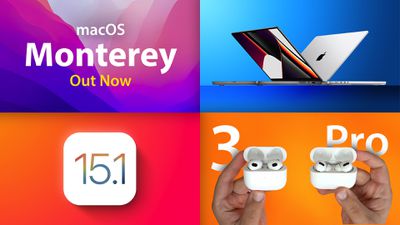 With the new MacBook Pro models out in the wild, we're learning more about the notched display with ProMotion, the impressive M1 Pro and M1 Max chips, and more. And with Apple moving forward on its next set of operating system updates with macOS 12.1 and iOS 15.2, there's more to come, so read on for all of the details on this week's biggest stories!

Alongside the launch of new 14-inch and 16-inch MacBook Pro models this week, Apple released macOS Monterey to the public. The software update has several new features, ranging from AirPlay to Mac to an Erase All Content and Settings option that lets you restore a Mac to factory settings without needing to reinstall the operating system.

Apple has since seeded a macOS 12.1 beta to developers for testing with additional features such as SharePlay and bug fixes.

We've put together a list of 10 new macOS Monterey features that are worth upgrading for, but keep in mind that some features like Universal Control and SharePlay are not coming until a later version.

Also keep in mind that some macOS Monterey features are not available on Intel-based Macs, such as Portrait Mode in FaceTime and on-device keyboard dictation, and this is likely because Intel-based Macs lack Apple's Neural Engine.

Hands-On With the New MacBook Pro

Following the launch of new MacBook Pro models, we got our hands on the 14-inch model and have shared a video with our first impressions.

The first reviews of the new MacBook Pro models were also shared by other websites and YouTube channels, with many reviewers agreeing that the new 14-inch and 16-inch models are impressive upgrades with fast performance, added ports, longer battery life, and mini-LED displays with ProMotion.

In addition to macOS Monterey, this week also saw the release of iOS 15.1, and as usual, there are quite a few new features and changes.

We've rounded up everything new in iOS 15.1, including SharePlay, ProRes video recording on iPhone 13 Pro models, the ability to add COVID-19 vaccination cards to the Wallet app, and more.

Apple has also released the first beta of iOS 15.2 and here's everything that is new.

With the third-generation AirPods now available to purchase, we've picked up a pair and shared a hands-on video with our first impressions.

Apple has shared a new support document that explains how users can ensure that an app's menu bar items do not appear hidden behind the notch on the new 14-inch and 16-inch MacBook Pro models.

In the support document, Apple says users can turn on "scale to fit below built-in camera" for an app to adjust the active area of the display, ensuring that the app's menu bar items appear below the notch and are always visible.

TheYayAreaLiving ?
This was a very good week.
Score: 2 Votes (Like | Disagree)

dannynjoni
I just need to pick up one of these new MacBook Pro’s already. I haven’t wanted a new Apple product this much since the original iPhone. But dammit I was at the Apple store yesterday and looked at both sizes. They’re both amazing in their own way. Thought I was firm on the 14” but that screen looks SO good on the 16. It’s like the Max size of the phone; I want the screen but not the phone size. Grrr 1st world decision time!
Score: 1 Votes (Like | Disagree)

Realityck
It's getting to be harder not to own multiple Macs thanks to this week. :)
Score: 1 Votes (Like | Disagree)

I just need to pick up one of these new MacBook Pro’s already. I haven’t wanted a new Apple product this much since the original iPhone. But dammit I was at the Apple store yesterday and looked at both sizes. They’re both amazing in their own way. Thought I was firm on the 14” but that screen looks SO good on the 16. It’s like the Max size of the phone; I want the screen but not the phone size. Grrr 1st world decision time!

I just went through this decision and at the end of the day it’s about effective resolution, as nice as a 3.5 lb machine would be - the resolution isn’t enough and I don’t want to use scaling. Sure you can add an external screen but if doing anything substantive on the move it’s too small (for me). The price difference is minimal. An extra pound, while certainly tangible when transporting for an hour each way per day, isn’t a lot for me (6’4” 235lbs).

How much do you really move around your laptops? How often do you connect an external display / will you be happy not using the max screen as a primary display?

If you would need a display connected more than you’d carry the machine (calculate per day) then the answer is ready.

They look amazing and I haven’t had My own Mac in about 8 years (having switched to a surface pro, regrettably). Decide though because the ship times suck!


Having written that I just saw you got the 14… at Costco? Enjoy it!
Score: 1 Votes (Like | Disagree)
Read All Comments

Friday May 20, 2022 12:18 pm PDT by Juli Clover
Sony this week came out with an updated version of its popular over-ear noise canceling headphones, so we picked up a pair to compare them to the AirPods Max to see which headphones are better and whether it's worth buying the $400 WH-1000XM5 from Sony over Apple's $549 AirPods Max. Subscribe to the MacRumors YouTube channel for more videos. First of all, the AirPods Max win out when it comes ...
Read Full Article • 174 comments