Happy MacBook Pro launch day! Apple's new M1 Pro and M1 Max MacBook Pros are now in the hands of customers after what seems like years of waiting for the new machines. We've picked up a 14-inch MacBook Pro and thought we'd share our initial thoughts and first impressions with MacRumors readers.

Subscribe to the MacRumors YouTube channel for more videos.
When it comes to the unboxing experience, there's not a lot new, but Apple did bundle the MacBook Pros with black stickers to match the black keyboard, a departure from the traditional white stickers. There's also a fancy new braided USB-C to MagSafe cable that works with the ‌MagSafe‌ port for fast charging purposes. 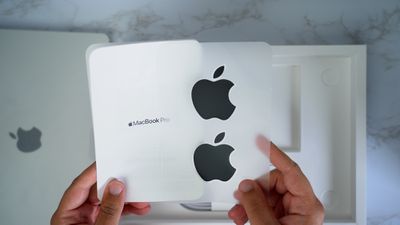 Design wise, the MacBook Pros are reminiscent of the PowerBook G4 with a thicker, heavier design that brings back an HDMI port and an SD card slot alongside the Thunderbolt 4 ports, ‌MagSafe‌ charging port, and upgraded 3.5mm headphone jack (it supports high-impedance headphones). There's no more "MacBook Pro" logo under the display, with Apple instead branding the word into the bottom of the machine.

The notch stands out a bit at first glance because it's not something people are used to seeing on a MacBook, but within just a few minutes of using the machine, it kind of blends right into the background like it does on the iPhone and you get used to it.

Apple redesigned the keyboard and made it all black with backlit keys, and it looks great. It feels similar to last year's model, but not quite the same because it's a bit quieter and softer, but still great to type on. There is no more Touch Bar, and Apple has instead implemented a full-sized row of function keys and a nice big Escape key that's easy to press. This is a scissor switch keyboard so you shouldn't run into failure problems like the butterfly keyboards used to have.

The mini-LED display, which supports ProMotion, looks vibrant, crisp, and super bright. It's a definite improvement over prior Intel and M1 Mac models thanks to the display quality and the slimmed down bezels. ProMotion is not as noticeable as it is on the ‌iPhone‌ and the iPad for most tasks, but you can see it when scrolling through websites.

Compared to the ‌M1‌ MacBook Pro we have on hand, the 14-inch model offers double the multi-core performance and double the GPU performance on benchmarks, and that should translate to notable real world usage gains as well.

Apple said that these MacBook Pros have the best audio systems in a notebook, and that wasn't an exaggeration. The speakers in the new MacBook Pros offer clear, full sound and higher volumes than prior MacBook Pro models. There's no distortion at max volume, and these can replace desktop speakers for those who use them now.

We'll have much more MacBook Pro coverage coming, so make sure to stay tuned to MacRumors. And if you got a new MacBook Pro, let us know what you think in the comments.

Seriously, it's getting tiresome. Get an Air then.
This Notch 'failure' enables us a 1080p webcam + additional screen space left and right (+74px). Rather than having a useless bezel or nose-cam. Use a black menu bar and it will never bother you again.

I would like to see a direct size comparison of the 15inch retina to the 14inch MBP. I can imagine a lot of people are considering replacing their 15" with a 14" model instead of going for a 16". Does anybody have a link to such a comparison?

Stopped lurking just to post this. I downsized from 15" and the smaller screen will definitely take some getting used to, but I'm pretty sure I wouldn't have wanted anything heavier. In fact, the 15" is starting to seem bulky to me.

TheSynchronizer
Absolutely in love with my 14 inch. It's pretty much perfect - and easily replaces both my M1 MBP and M1 iPad Pro as it combines all my favourite features from both.

This is it Apple. Together with the 13 Pro, this Macbook rounds this year off as the best year for Apple releases ever for me.

andiwm2003
I would like to see a direct size comparison of the 15inch retina to the 14inch MBP. I can imagine a lot of people are considering replacing their 15" with a 14" model instead of going for a 16". Does anybody have a link to such a comparison?
Score: 11 Votes (Like | Disagree)

magicschoolbus
I want to see the base model vs the top of the line model export the same 4k video file in a timed test.
Score: 8 Votes (Like | Disagree)
Read All Comments