Apple Arcade is set to gain another LEGO game, with LEGO Star Wars: Castaways set to launch on the gaming service on Friday, November 19. The game is available on iPhone, iPad, Mac, and Apple TV. 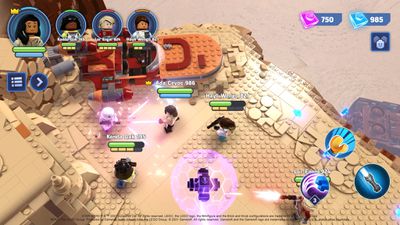 LEGO Star Wars: Castaways features a storyline where players crash land on a mysterious planet in the middle of a maelstrom. The planet is not abandoned, and gamers can meet both LEGO NPCs and other players as this is the first online social LEGO Star Wars game.

Players can customize their character with hundreds of LEGO Star Wars pieces and compete in games with others. Iconic Star Wars content will be available, so players can fight Tusken raiders, battle stormtroopers on Endor, and see Jabba's Tatooine palace. There are even Death Star simulations to participate in. There is an underlying mystery to solve, and players can work with a team or go solo.

Build your own in-game LEGO minifigure from hundreds of LEGO pieces in a new Star Wars game on Apple Arcade. Discover a secret world, now home to fellow Castaways, and build a life in this new home! Explore a new island, meet new characters, race Microfighters and even throw a dance party on the island! Team up or play solo and immerse yourself in simulations, recorded by the technology of an ancient civilization, spanning moments across the Star Wars universe. Battle foes, solve puzzles, build your skills in battle arenas and learn to pilot your way through flight simulations! Unearth mysteries and discover a growing threat to life on the planet.

‌Apple Arcade‌ users can opt to "Get" LEGO Star Wars: Castaways right now, and it will install on their devices when it launches. [Direct Link]