In protest of the company's now delayed CSAM detection plans, the EFF, which has been vocal about Apple's child safety features plans in the past, flew a banner over Apple Park during the iPhone 13 event earlier this month with a message for the Cupertino tech giant. 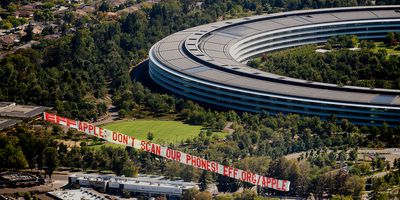 During Apple's fully-digital "California streaming" event on September 14, which included no physical audience attendance in Cupertino in favor of pre-recorded segments live-streamed, the EFF decided to fly a plane over ‌Apple Park‌ with the message "Apple: Don't scan our phones! EFF.ORG/APPLE."

The EFF says it opted to use this form of "aerial advertising" to make sure that Apple's CSAM plans don't "fade into the background" and that Apple "hears" them. The EFF also flew the same banner over 1 Infinite Loop, Apple's previous headquarters that it largely vacated four years ago.

Apple announced in August its plans to use on-device machine learning and its custom-built "NeuralHash" system to detect images of known CSAM images on iPhone users' photo libraries. Following its announcement, privacy advocates and groups, including the EFF, were vocal about its potential privacy risks.

Unlike Google and others who scan for CSAM, or child sexual abuse material, in the cloud, Apple's system instead uses on-device processing to identify CSAM images. The EFF is, however, unsatisfied and has previously called on Apple to abandon its plans entirely.

On September 3, Apple announced it would be delaying CSAM detection, which was meant to roll out later this fall, to "collect input and make improvements before releasing these critically important child safety features." The EFF, in a blog post, says it will independently be holding events with "various groups" to collect research and suggestions, some of which it says could be helpful to the tech giant amid the delay.

Now that Apple's September event is over, Apple must reach out to groups that have criticized it and seek a wider range of suggestions on how to deal with difficult problems, like protecting children online. EFF, for its part, will be holding an event with various groups that work in this space to share research and concerns that Apple and other tech companies should find useful.

mainemini
Good for EFF. Keep up the pressure on Apple to give up this bad idea. I suspect there are plenty of law enforcement agencies and governments very interested in using this for other purposes.
Score: 55 Votes (Like | Disagree)

sh20
I don’t understand Apple on this one, they have been pitching themselves as the privacy friendly company amongst tech giants and still claim that as one of their advantages; yet working on a feature that scans all your photos..? it just doesn’t make sense to me.
Score: 50 Votes (Like | Disagree)

TheYayAreaLiving ?
Just dismissed the whole CSAM, Apple. What do you not understand? It's OK to admit you were wrong!

BvizioN
I think Apple will skip this one. The risk for them is too great. Makes no sense. Why use the photo library of nearly billion devices to catch few criminals? Let the people who get paid by our taxes to do their job without using our devices.
Score: 42 Votes (Like | Disagree)

I don’t understand Apple on this one, they have been pitching themselves as the privacy friendly company amongst tech giants and still claim that as one of their advantages; yet working on a feature that scans all your photos..? it just doesn’t make sense to me.

justperry
One of the worst ideas Apple ever had.
Score: 31 Votes (Like | Disagree)
Read All Comments