iPadOS 15 Allows Apps to Use Up to 12GB of RAM on High-End iPad Pro, Up From Just 5GB

In June, we reported that starting with iPadOS 15, Apple is giving developers the ability to allocate their apps more RAM, allowing apps to use more of the available memory in the iPad to run faster and smoother. 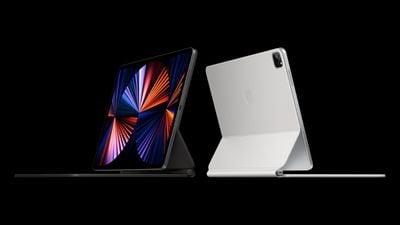 Via an entitlement, Apple is giving developers the ability to let iPadOS know that certain functions of their apps may perform better if they have access to more system memory. Currently, Apple caps the amount of memory an app can use, mainly to ensure that a single app does not utilize all of a device's memory, impacting other core system functions.

Till now, we had limited information regarding specific details of this entitlement, including exactly how much RAM an app can request. However, with ‌iPadOS 15‌ launching on September 20, we now know that on the highest-end M1 iPad Pro, apps can use up to double the amount of RAM that was previously allowed.

In both cases, even if an app informs iPadOS that additional memory is needed, iPadOS still allocates a 2GB buffer for the app, on top of the 4GB available for 16GB ‌iPad Pro‌ models, and the 2GB free for the other models.

The new change is likely to be most beneficial to graphically intensive apps, such as those for drawing, modeling, and photo and video editing. While the added RAM allocation is welcomed, some users may continue to argue that iPadOS is not taking full advantage of the hardware within ‌iPad‌, especially with the 11-inch and 12.9-inch ‌iPad‌ Pros powered by the ‌M1‌ chip.

Apple says the new entitlement will be available on "supported devices," and at this point, which devices are supported beyond the new ‌iPad‌ Pros is unknown. For example, this week, Apple released a new iPad mini and a new baseline ninth-generation ‌iPad‌, with 4GB and 3GB of RAM respectively. For these new models, Apple is unlikely to allow apps to request RAM above the system limit, as it may impact core functions of iPadOS.

‌iPadOS 15‌, which includes the ability to place widgets anywhere on the Home Screen, an improved multitasking experience, Live Text, and more, will launch alongside iOS 15, watchOS 8, and tvOS 15 on Monday, September 20.

BvizioN
How about Pro apps Apple? Starting with your own Final Cut Pro x?
Score: 10 Votes (Like | Disagree)

You already have that. It's called MacBook Air (or Pro if you'd like).

No touch gestures, no pencil and no detachable keyboard on those. ?‍♂️
Score: 7 Votes (Like | Disagree)

hovscorpion12
Within 6 months we should see apps getting RAM boosts. Can not wait to see how procreate, photoshop, LumaFusio…etc take advantage of the 12GB of RAM on the 16 model and 6GB RAM on the 8GB model
Score: 7 Votes (Like | Disagree)

dogslobber
The iPad is almost a computer.
Score: 7 Votes (Like | Disagree)
Read All Comments

Wednesday September 15, 2021 9:25 am PDT by Joe Rossignol
Apple this week introduced a redesigned sixth-generation iPad mini that looks much closer to the current iPad Air, with slimmer bezels, a Touch ID power button, a USB-C port, compatibility with the second-generation Apple Pencil, and more. The new iPad mini is equipped with the same A15 Bionic chip as iPhone 13 models, and while Apple doesn’t advertise the amount of RAM in the device,...
Read Full Article • 171 comments