Despite Apple offering the M1 iPad Pro in configurations with 8GB and 16GB of RAM, developers are now indicating that apps are limited to just 5GB of RAM usage, regardless of the configuration the app is running on. 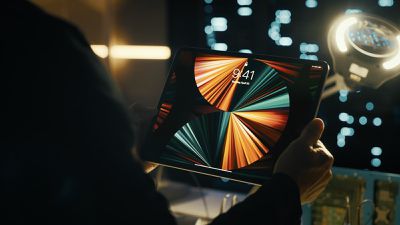 The ‌M1‌ ‌iPad Pro‌ comes in two memory configurations; the 128GB, 256GB, and 512GB models feature 8GB of RAM, while the 1TB and 2TB variants offer 16GB of memory, the highest ever in an iPad. Even with the unprecedented amount of RAM on the iPad, developers are reportedly severely limited in the amount they can actually use.

Posted by the developer behind the graphic and design app Artstudio Pro on the Procreate Forum, apps can only use 5GB of RAM on the new ‌M1‌ ‌iPad‌ Pros. According to the developer, attempting to use anymore will cause the app to crash.

There is a big problem with M1 iPad Pro. After making stress test and other tests on new M1 iPad Pro with 16GB or RAM, it turned out that app can use ONLY 5GB or RAM! If we allocate more, app crashes. It is only 0.5GB more that in old iPads with 6GB of RAM! I suppose it isn't better on iPad with 8GB.

Following the release of its M1-optimized app, Procreate also noted on Twitter that with either 8GB or 16GB of available RAM, the app is limited by the amount of RAM it can use.

The previous maximum RAM in an ‌iPad‌ was last year's ‌iPad Pro‌ which featured 6GB of RAM, regardless of storage configuration. Given, a 5GB limit on apps imposed by iPadOS wouldn't necessarily ring any alarm bells as developers would have access to the majority of the available memory. Although, with the ‌M1‌ ‌iPad Pro‌, developers cannot tap the full potential of the available hardware.

The added RAM, especially in the higher-end 1TB and 2TB models, will still benefit the user by allowing them to keep more apps open in the background. iPadOS itself can access the ‌M1‌'s entire pool of unified memory, while apps can reportedly only access 5GB of it.

‌iPad‌ users have long voiced the mantra that iPadOS doesn't take full advantage of the available hardware and potential of the ‌iPad Pro‌, and now thanks to the ‌M1‌ chip inside of the ‌iPad Pro‌, that's certainly more of a case.

Apple will hold its Worldwide Developers Conference on June 7, where it's expected to announce iOS 15, watchOS 8, macOS 12, tvOS 15, and iPadOS 15. Bloomberg has reported that iPadOS 15 will include the biggest redesign to the iPad homescreen since the iPad first launched, including the ability for users to place widgets anywhere on the grid.

We've contacted Apple for clarification regarding the amount of RAM apps can access and will update this post if we hear back.

iamyash
Do not buy a tech product based on the promise of future software updates
Score: 82 Votes (Like | Disagree)

Kierkegaarden
This just tells me that we’re in store for some big iPadOS news at WWDC. It doesn’t make sense that Apple would add all of this headroom for nothing.
Score: 44 Votes (Like | Disagree)

Apple tricked customers in spending more money on the higher tier iPad for no reason it was all a pr stunt, iPadOS never needed 16gb ram and also they only used the m1 as it’s cheaper to all use same chip in all products it was never about giving the iPad more power

Because they wanted customers to think they needed the higher tier, also it’s just the ram on the m1 chip so they have left overs from the Mac etc that’s why. It’s cheaper to use the same chips, it was never for the iPad to need more power

They only have this ram because the m1 chip has it in the chip and it’s cheaper to use the same chip it’s not for more power it’s just to make you think it’s more powerful iPadOS is not needed for that ram, wwdc will not change anythibg

People need to understand on the macbook the 1tb comes with 16gb ram it’s the same m1 chip the iPad was never meant to need the more power, it’s just cheaper for apple to use one chip in all devices that’s the only reason the 1tb one has 16gb that’s the way the chip was made, people must stop thinking ipados15 will change anything, it’s a bit of a scam from apple

Seriously, you need to stop with this garbage as there is a fundamental flaw in your assertion ...... the flash storage is not part of the M1 SoC package, they are separate chips. So why would Apple use an M1 16GB SoC instead of an 8GB SoC? Surely they would just use the M1 8GB SoC paired with 1TB of flash storage chips?

They are CHOOSING to pair the 16GB M1 SoC with 1TB and 2TB flash storage.

Feel free to read the teardowns of the M1 Macbooks which list the flash chips as separate chips.

This just tells me that we’re in store for some big iPadOS news at WWDC. It doesn’t make sense that Apple would add all of this headroom for nothing.

Exactly. Apple is all about margins, they aren’t going to add more expensive RAM for no reason. This is part of why Apple doesn’t really advertise how much RAM iPhones and iPads have.
Score: 23 Votes (Like | Disagree)

You’ll be back straight after WWDC ???

What after Animoji extras and minor tweaks no thanks
Score: 23 Votes (Like | Disagree)
Read All Comments