Apple TV+ is Apple's streaming service, written, produced, and developed by Apple and its partners, so it shouldn't come as a surprise for anyone to learn that Apple products are commonly placed throughout scenes for ‌Apple TV+‌ shows, but they're all done for specific reasons. 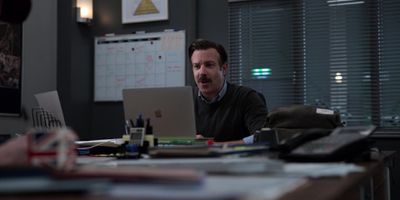 A new video report by The Wall Street Journal, which required watching over 74 episodes of ‌Apple TV+‌ shows, including Ted Lasso, The Morning Show, Defending Jacob, and Trying, outlines precisely how and why Apple product placements are done throughout specific episodes.

According to the report, throughout 74 ‌Apple TV+‌ episodes, 300 iPhones, 120 MacBooks, and 40 pairs of AirPods were shown throughout certain scenes. That equates to over 700 Apple product placements. To put that into perspective, in one episode of Ted Lasso, a total of 36 Apple products were shown either on set or actively being used by characters.

To some, Apple is simply doing this as a promotion for its products, using the popularity and storyline of its shows to bolster its brand image. While undoubtedly true, the placements are strategic and not at all random. To understand the logic behind them, The ‌Wall Street Journal‌ cited Cristel Russell, a professor of marketing at Pepperdine University, to understand how brands, such as Apple, place their products in shows and movies.


The logic boils down to three areas; visuals, audio, and connection to the plot, according to Russel. A viewer's attention is typically geared towards the middle of the display, making product placements that are front and centered more noticeable. Apple uses that logic throughout several scenes of Ted Lasso and The Morning Show, for example, in which products are slowly brought into focus in the middle of the screen.

For audio, this may include references, such as the sound of an iOS notification or direct connections to Apple features and services. In several Ted Lasso scenes, characters can be heard stating they aim to FaceTime someone, or in one case in specific, Ted says he would buy some Apple stock. While subtle, Russell says these audio clips help consumers tie a connection to a particular brand or product.

Lastly, with plot connections, ‌Apple TV+‌ show writers and producers aim to make direct emotional and physiological connections for viewers between a device and a character's life story. As referenced in the video, in particular scenes of Ted Lasso, Ted can be seen using his iPhone to help him connect with his wife as they complete a divorce.

As Apple takes great care and attention to detail as to when and how its products are shown in ‌Apple TV+‌ content, the company is equally concerned over when not to show its products. A report from last year notes how Apple is deliberate in making sure that "bad guys" or villains in movies and shows are not seen using Apple devices since it may reflect poorly on Apple's image.

Johnny907
“Strategic?” They’re literally all over the place in their shows. Other than “For All Mankind” and “See,” for obvious reasons, it’s like Apple is the only tech company in these worlds. Funny part was when they were busted for editing out the notch on an iPhone 12 in an episode of Ted Lasso a couple weeks ago, as it proves even Apple is embarrassed about that thing.
Score: 19 Votes (Like | Disagree)

“Strategic?” They’re literally all over the place in their shows. Other than “For All Mankind” and “See,” for obvious reasons, it’s like Apple is the only tech company in these worlds. Funny part was when they were busted for editing out the notch on an iPhone 12 in an episode of Ted Lasso a couple weeks ago, as it proves even Apple is embarrassed about that thing.

I bet we’re 3 episodes away from watching the sighted discovering an old Mac in “See”.
Score: 19 Votes (Like | Disagree)

fwmireault
As much as I love Ted Lasso, the product placement is very apparent, especially in the S02. I don’t mind that Apple promotes it’s own products on Apple TV+, but I don’t want to feel that the script is adaptated to call out Apple products or services (Coach Beard who shares an iCloud account, Ted who says he would have bought Apple stock, etc.). It was more subtil on The Morning Show
Score: 14 Votes (Like | Disagree)

dapa0s
I think the wall street journal overanalyzed it lol. They just put Apple products instead of any other competing products, whenever they got a chance. The only exception that I've seen was with Mythic Quest, where obviously the game developers used plastic PC stuff mostly, and not Apple products.
Score: 14 Votes (Like | Disagree)

bobtem
Is this something that needs to be explained? Like saying “How Apple promotes itself in it‘s own ads…”
Score: 9 Votes (Like | Disagree)
Read All Comments